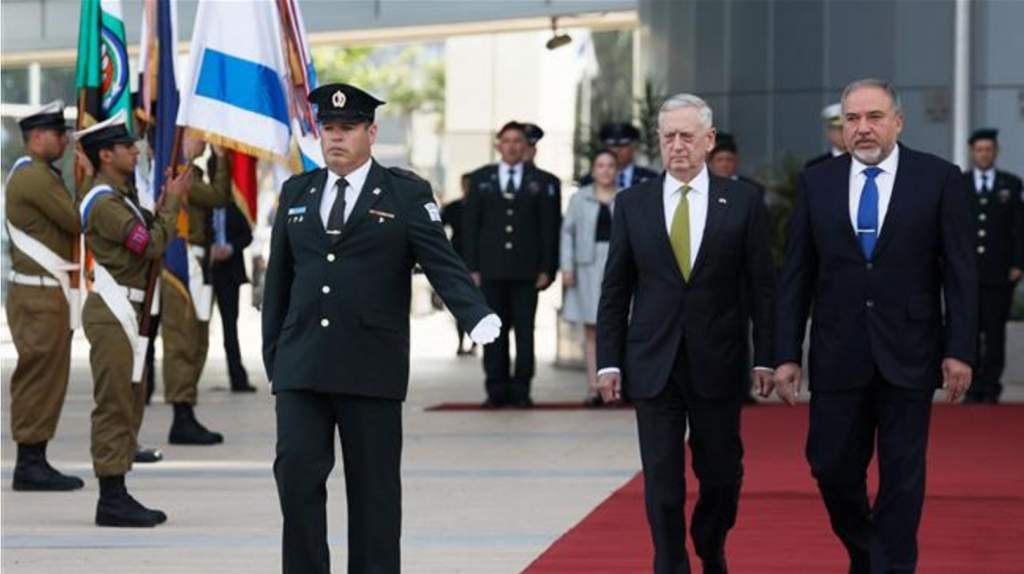 US Defense Secretary General James Mattis has arrived in Israel for talks expected to focus on Iran and Syria as well the strategic relations between Tel Aviv and Washington.

Mattis arrived in Tel Aviv Thursday afternoon from Cairo on the third leg of a week-long tour of the US allies in the Middle East.

Marking the first time he has visited Israel as the Pentagon chief, Mattis was greeted by an official honor guard at army headquarters in Tel Aviv on Friday morning.

He then met the Israeli minister for military affairs, Avigdor Lieberman, and is scheduled to hold talks with Prime Minister Benjamin Netanyahu and President Reuven Rivlin.

Mattis hopes to hear directly from Israeli leaders their concerns about regional issues, with Iran’s influence topping the list.

‘No doubt Syria has chemical weapons’

The conflict in Syria, where the US and Israel seek to remove President Bashar al-Assad from power, is also on the agenda, according to the prime minister’s office.

Israel was one of the first US allies to salute President Donald Trump for a recent missile strike on a Syrian airbase, where they alleged a suspected chemical attack originated.

Speaking during a press conference with Lieberman on Friday, Mattis said there can be “no doubt” that Syria has retained some chemical weapons and warned President Assad not to use them.

“There can be no doubt in the international community’s mind that Syria has retained chemical weapons in violation of its agreement and its statement that it had removed them all. There is no longer any doubt,” he said.

The US, Israel and Saudi Arabia have been pushing to overthrow the Syrian government through the use of proxy militant forces in the country.

Iran has been lending advisory support to Syria in its battle against the foreign-backed militants, but has avoided direct military involvement in the conflict.

Known as the “Mad Dog,” Mattis has famously said the three gravest threats to US national security were “Iran, Iran, Iran.”

While in Riyadh on Wednesday, the Pentagon chief reiterated the Trump administration’s position that Iran seeks to “destabilize” the region.

He told reporters after meeting with senior Saudi officials that “everywhere you look if there is trouble in the region, you find Iran.”

US-Israeli ties reached a low point over the 2015 nuclear agreement between Iran and world powers, including the United States.

Former President Barack Obama pushed for the agreement, to the dismay of Netanyahu who argued it would only strengthen Iran in the region.

Israeli leaders were emboldened by the election of Donald Trump, who has described the nuclear accord as “the worst deal ever negotiated” and threatened to “rip it up.”

In his latest criticism on Thursday, Trump blasted the deal as “a terrible agreement” that “shouldn’t have been signed,” and accused Iran of “not living up” to its spirit.