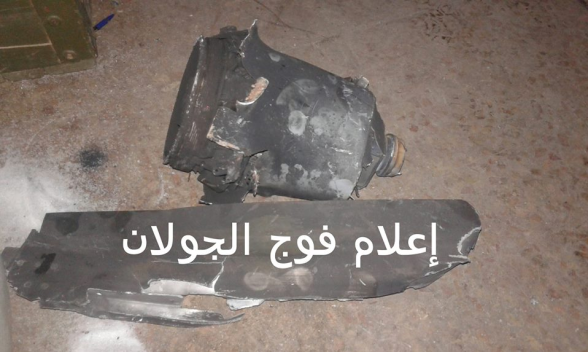 As it turned out, Israeli aviation attacked the Syrian government troops with unmanned aerial vehicles. The soldiers of SAA’s 90th Infantry Brigade were under fire.
The Israeli Air Force planes struck a missile attack at the positions of the Syrian army in the Khan Arnabeh district of Quneitra Governorate. It was also reported earlier the blow was carried out to the east of the village of Ein Ayshaa.

Two missiles were fired at 06.45 p.m. when government forces were repulsing  Al-Qaeda’s attacks in the vicinity of the city of Quneitra.

The remnants of an Israeli missile that hit SAA Golan regiment’s tank.

The incident led to heavy losses of equipment and material in the Syrian Arab army.

There are reports that Al-Qaeda terrorists infiltrated Quneitra from the Golan Heights occupied by Israel with the aim to strengthen the front in Madinat al-Ba’ath.

Apparently, Israel had prepared and launched a missile strike in order to provide artillery support to Al-Qaeda terrorists. The Israeli drones recorded in the province of Quneitra make it possible to conclude that Al-Qaeda is provided with reconnaissance information from the battlefields with Israel help too.

U.S.-led International Coalition Kills Again: 5 Civilians as a Result of an Air Strike

As a result of the air strike of the international coalition led by the United States 5 civilians were killed in the city of Al Tabqah. The strike was aimed at supporting the offensive of the Kurds.
At the moment, Kurdish militia units have advanced deeply into the city of Al Tabqah and significantly squeezed the ISIS fighters. It is reported that the Kurds have already captured a local radio station. The militiamen also repulsed the terrorists’ attack on the previously liberated airport near the city.
The attack on Al Tabqah is now in full swing. Kurds have every chance to win and it is remains a mystery why has the United States carried out the useless, in fact, air strike.

According to Inside Syria Media Center’s credible sources, the Lebanese army during the operation on April 21 detained a group of terrorists with one of the field commanders of ISIS among them.
A group of militants operated in the mountains near the Wadi al-Husn, which is located near the Syrian-Lebanese border. A detachment of Lebanese commandos entered into a fire-fight with terrorists, killing several militants. 10 people with the field commander of ISIS were taken prisoner.

It is reported the special operation was without losses among the government forces. Security measures in the city of Aarsal were strengthening.
Apparently, the successful operations of the Syrian government army force the jihadist groups to flee the battlefields and cross the border to seek asylum.