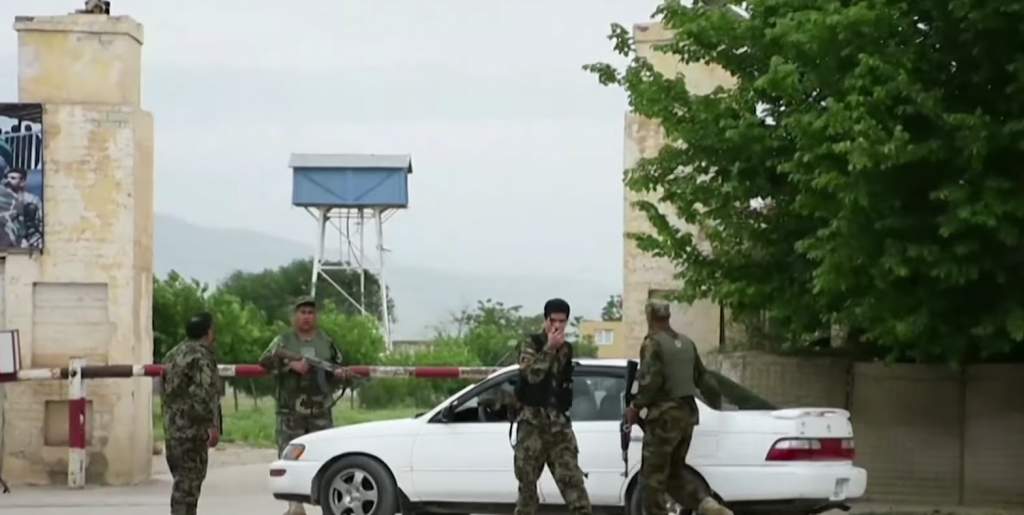 … by Nazar Mohammad Mutmaeen, for VT

After Syria, Afghanistan is about to turn into showdown field of the United States and Russia. A Kandahari police general, who had survived a deadly attack three years ago, said that Afghanistan is Hell, we live in Hell.

The large amount of Afghan army’s causalities as a result of Taliban’s assault on the Afghan National Army’s 209th Shaheen Corps Headquarters in Balkh province on April 21, 2017 has increased concerns on the ongoing Afghan war.

The Afghan government, UN, U.S., China, India, Pakistan, Iran and several other international bodies roundly condemned the Taliban assault on 209th Shaheen Corps; however, Russia is yet to have any reaction in this regard.

The attack on the Shaheen Crops come to ground eight days after (April 13, 2017) the United States used the greatest bomb, nicknamed mother of all bombs (MOAB), on Achin; I am inclined that there is an unseen link between Achin and Balkh’s attacks.

My understanding is that, the United States and Russian are well aware of the aims behind the curtain, the attack on Balkh seems to be a kind of response to the use of MOAB on Achin.

Apparently, the U.S. and Russia trail their strength in Afghanistan; we have also previously said that presence of American military forces and signature of the Security Agreement (BSA) will elongate the war in the country for another 9 years (9 other years of war after signing of the security agreement with the United States).

Definitely, the Taliban had been assisted from the inside of the government in their attack on Shaheen Corps, it is said that 6 Taliban fighters from abroad and 4 insiders from the military in the mentioned Corps had participated in this raid.

The Commander of the Corps, General Momand Katawazai was a former Parchami (Leftist), his family members are still livr in Moscow; both Parchams and commanders of the North Alliance were performing duty under his command.

Army Chief of Staff, Qadam Shah Shahim stepped down on April 24, 2017, he was well-known member of the North Alliance and had good ties with Iran; it is said that after the Taliban encountered defeat in the North of the country as a result of the U.S. campaign on Afghanistan, both the groups of Ahmad Shah Massoud and Dostum were wishing to have the Taliban surrendered to them; a delegation of the high-ranking Iranian officials had been taken by Bismillah Mohammadi and Qadam Shah Shahim to a locality where they could talk with a Taliban military leader.

Defense Minister Abdullah Habibi has 40 years of military experience; he was one of the former Leftists. Meanwhile, Chief Advisor of President in Security Affairs, General Mohammad Afzal Lodin had also harshly fought for Moscow’s interests from 1979 up to 1992.

Besides that, the State  minister for security reforms, Amrullah Salih has also stayed for a long time in Tajikistan, and was the intelligence member of the North Alliance during its war with the Taliban; he also had meetings with Russians and Iran.

Now, as the rivalry between the United States and Russia started in the region, of course, some of them, as of their presence in security bodies, seem to be much closer to Russia and Iran’s interests than to the United States’.

Most of the analysts believe that the Taliban had been assisted by senior government officials in their attack on Shaheen Corps; it could be hard for the Taliban to pass all of the 6 military checkpoints without any significant barrier; the military troops became directed to the lunchroom, and, then, an explosion occurred in the lunchroom, fire started close to the command of the Corps and thus, the Taliban claimed that up to 500 military personnel became killed; the Taliban considered this attack as a revenge of their two slayed governors.

On November 11, 2016, Taliban organized an assault on the German Consulate in Mazar-e Sharif, the provincial capital of Balkh province, which demolished everything; the Taliban said that this attack was for the revenge of the Kunduz children.

It is said the developed intelligence technology for Central Asia was installed by the United States in the German Consulate; Russian were aware of this matter. Similarly, after Atta Mohammad Noor had a visit to Saudi Arabia along with Chief Executive, Dr. Abdullah on October 17, 2016, the trust of Iran in Atta Mohammad Noor became decreased.  Thus, Russia and Iran, perhaps, would have assisted the Taliban when it comes to technical issues, location and military maps.

In both of mentioned attacks, apparently, Iran and Russia would have asked some senior officials in the Afghan government to help the Taliban in transportation, technical assistance and provision of military maps.

The attack on Shaheen Corps was so challenging that caused the Defense Minister Abdullah Habib, the Chief of Army Staff General Qadam Shah Shahim and the Corps’ Commander General Momand to step down. The commanders of other three corps (207th, 205th and 203rd) including 209th Shaheen Corps became dismissed from their duties.

Moreover, the U.S. Defense Secretary James Mattis made an unannounced trip to Kabul on April 24th; in the case, both the Afghan Defense Minister, and the Chief of Army Staff had a press conference on their resignation short before the arrival of James Mattis.

The U.S. Defense Secretary met the Army Gen. John Nicholson, the top U.S. commander in Afghanistan and Afghan President Dr. Ghani, and announced his support to the Afghan government. Responding to the request of Afghan government on 200 military helicopters, James Mattis said that the President Trump’s administration reviews the Afghan policy.

James Mattis in a joint press conference with Gen. John Nicholson said that Russia provides Taliban with military assistance. No other country than the United States can make decisions on the Afghan development, he added. James said that American leverage and interference in Afghanistan is legal but Russia’s is illegal here.

The Afghan government, which was making efforts to isolate the Taliban and Pakistan, established good ties with India and started to get distance from China, it also deteriorated its ties with Russia based on American policies; the result for Pakistan, then, was to create a regional coalition with Moscow, China and Iran, and thus, this coalition supports the Taliban’s political policies on regional and international levels.

Apart from Pakistan, the other important points of closeness between Taliban and, China, Moscow and Iran are fear and concern over ISIS in Afghanistan, long-term presence of American forces (the Pakistan supports it) and poppy cultivation / increase  of opium productions.

The Trump’s administration reviews the Afghan policy; they have two option; whether they neglect the power of ISIS armed group in Afghanistan, and get prepared for opposition with Russia, China and Iran in the region, or they have to have face to face talks with the Taliban.

It looks like the United States continues its last trail of strength in Afghanistan, they will target and kill the Taliban leaders; and the Taliban, in response, will organize similar attacks alike Balkh, as a result of the assistance of some government officials; hence, it aggrandizes the problem and so the problem does not become solved either.

The Balkh attack, however, reminds us of 1990s where there were a lot of racial, regional and partial disagreements inside the Dr. Najeebullah’s government that their prevention was almost impossible;correspondingly, there are also such problems in the Afghan government nowadays.

On the other hand, former President Karzai is working on the alternative of Dr. Ghani’s government. About the Protection and Stability Council, however, it is said that it even had planned the White Coup against the government.

There are rumors that the Interior Minister was also involved in this White Coup of Protection and Stability Council, and thus, he would be a troublemaker for the Ghani’s government in the future. Then again, the political and regional power in Balkh is with Atta Mohammad Noor and political and military power in Kandahar is with Gen. Abul Raziq, that both of them do not intend to obey the central government.

It looks as if we have to enter a new long war, the war whose victims would be Afghan youths, and whose benefits would be received by America or Moscow, Pakistan or India and Iran or Saudi Arabia,

I call upon the involved parties that war is not the solution, war has not got any winner, causalities cannot bring us security, peace and security cannot be brought in the presence of foreign troops; therefore, the best way for us, the Afghan people, is to come together, and say NO to the presence and interference of all foreigners in Afghanistan.

God forbids, if real efforts on pace was not made, we, the Afghan nation, would be victims of a complex and bloody war whose advantages would be taken by alien countries.