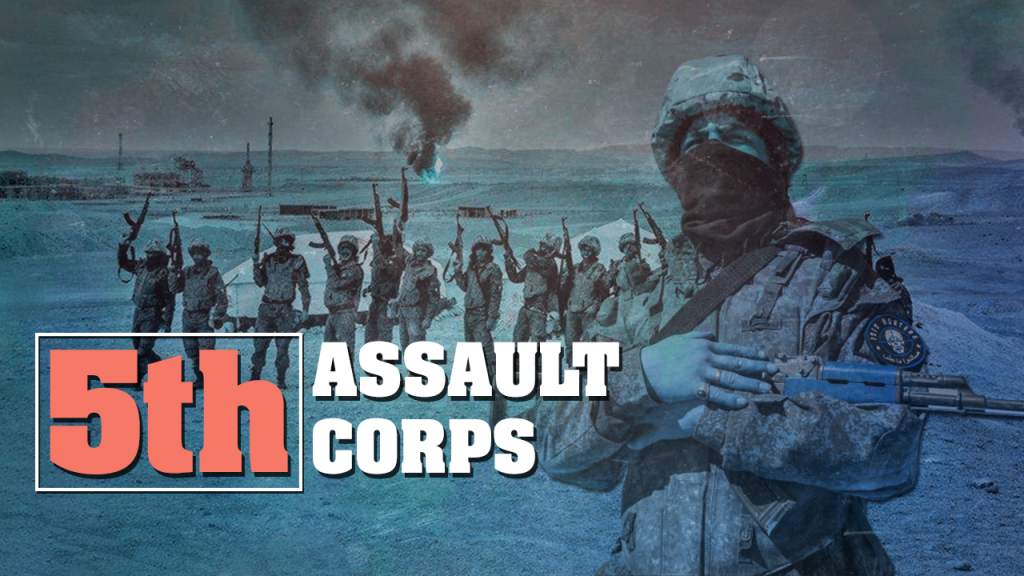 The 5th Assault Corps drew the media attention in early 2017 following the fall of Palmyra to ISIS, which showed the need for more well-trained and equipped infantry to deal with crisis situations even more evident. The Syrian military announced the formation of the 5th Assault Corps in November 2016 as an elite force consisting solely of volunteers and backed up by Russia and Iran.

Currently, the corps is over 10,000 troops strong. The leadership of the corps is headquartered in Latakia with military bases scattered about Hama and Palmyra. The top commanders of the force remain unknown. It is believed that it is led by a group of Syrian commanders, aided by large presence of Russian advisors.

Since the establishment of the 5th Corps, the force was participated in several offensive operations the first and most important of which was the Palmyra operation. Troops of the 5th Corps were able to repel ISIS attacks against the key T4 Military Airbase in spite of the force’s relative lack of combat experience at that time.

After successfully defending the airbase against incessant ISIS attacks for several weeks, 5th Corps troops began rapid advance toward Palmyra, using new tactics and with intense Russian air support. On March 4, the 5th Corps and allied forces recaptured the ancient city with very few casualties in contrast to ISIS death toll of over 300 fighters. The 5th Corps would not stop in Palmyra, as the force would take on a number of operations to expand the buffer zone around Palmyra, including the capture of the Palmyra Silos and a number of hills and oil fields north and south of the city.

The 5th Corps was the first force to support the Syrian Army and the NDF during the latest jihadist offensive on Hama. On the 21st of March, fighters from the corps along with the NDF and Tiger Forces were able to absorb the attack and launch a successful counterattack recapturing over the territories rebels had taken in their offensive.

Many reports suggest that the 5th Corps will be the backbone of the anticipated offensive in east Homs that is aimed at lifting the siege of Deir Ezzor. In fact, many tribal fighters and Deir Ezzor locals have already begun to volunteer for the corps even as Russia continues to bolster the capabilities financially and militarily. The operation that may be launched in late 2017 will seek to retake the 150km-long highway between Palmyra and Deir Ezzor, in what would be one of the largest operations since the beginning of the Syrian war.

The 5th Corps includes several volunteer groups in its forces including Assad Shield, Mahardeh Forces, and Martyrdom or Victory Groups. However, the most important are the following:

ISIS Hunters: A special operations group formed by volunteers who lost relatives and loved ones to ISIS terrorism. Most of its fighters are native to Homs countryside and Palmyra. This group is distinguished by the fact that it was fully armed and trained by Russia. It has already carried out a large score of raids and operations on ISIS positions all around Palmyra; those operations are believed to be the reason the city was recaptured in a very short time.

Tribal Forces: A group of volunteers from the tribes of Deir Ezzor, Raqqa, and Hasakah. This was the force that stormed Palmyra during the last phase of the offensive. It is believed that this group will be the spearhead force of the anticipated Deir Ezzor offensive.

Ba’ath Brigades: A military group formed from members of the ruling Ba’ath Party. The group boasts no fewer than 2,000 fighters and is mainly tasked with defensive operations in the Palmyra desert to ensure the city will not fall again.

As for the weapons operated by the 5th Corps, most were supplied by Russian Army. T-72B3 tanks with Kontakt 5 reactive armor system & thermal sight are perhaps the most advanced weapon systems used by 5th Corps fighters. The Corps are also abundantly equipped with T-62m tanks with improved armor protection which allowed them to survive at least 5 ATGM hits, including by TOW missiles, in Palmyra and north Hama, with none of the crewmembers becoming casualties. In addition to the T-62 ranks, the force is well-equipped with BMP-1s, BMP-2s, GAZ Vodnik wheeled APCs armed with 14.5mm machineguns that are also used as a field ambulance in addition to many UAZ Patriot light utility vehicles armed with 12.7mm machineguns and 30mm automatic grenade launchers.

Russia continues to supply more equipment and ammo on a routine basis as the group increases in size and responsibilities. The 5th Corps so far is a successful experiment in that it managed to accomplish all assigned missions and is a precursor to merging all militias that support the Syrian Army into an official part of the Syrian Armed Forces in the future. Some experts believe that the creation of the 5th Corps is the first part of the Russian-led attempt to improve the Syrian security system and to create a united command structure that will be able to manage, control and absorb various militias supporting the government. In turn, pro-government groups should also be interested in further formalization of their relations with the government and integration into the Syrian military and security services. Therefore, their members will be able to take a rightful place in the post-war Syria.