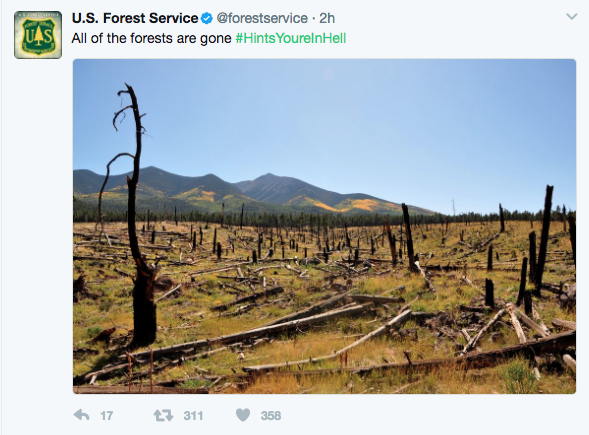 “We strip them (planets) bare and let you people kill each other,” said a source.

Who wants to live in a waste land? Well, if Republicans get their way with increased drilling in the oceans and with public lands up for sale for more mining and gas drilling, someone might just get his wish. And yes, we will live in a waste land, stripped bare, and still fighting each other for someone else’s profit.

Two of the many Trump agenda items targeting our commons – land or resources belonging to or affecting the whole of a community- in the news today are:

Public Lands Up for Sale:

The US Forest Service responded to the “Review of Designations Under the Antiquities Act” with a tweet.

“Cloaked in language that seems to suggest good stewardship of public lands, there is a passage that tells the real tale,” said Ann Werner in a post here.

“Monument designations that result from a lack of public outreach and proper coordination with State, tribal, and local officials and other relevant stakeholders may also create barriers to achieving energy independence, restrict public access to and use of Federal lands, burden State, tribal, and local governments, and otherwise curtail economic growth,” said the Executive Order.

The National Monuments that were previously protected under the Antiquities Act of 1906 are listed here on the National Parks Conservation Association website.

According to an article by Mother Jones, Trump’s actions may also be illegal.

“Sixteen presidents have cemented their legacies by designating new public lands and national monuments, a power granted to them under the 1906 Antiquities Act. President Donald Trump, meanwhile, wants to go in the opposite direction: If he actually follows through on his threat to reverse any monuments created by Presidents Barack Obama and Bill Clinton, he’d be the first commander in chief to revoke a monument designated by a predecessor. He’d also be stretching the legal authority of his office beyond what Congress ever granted,” said Rebecca Leber in the article, Trump’s Latest Plan to Undo Obama’s Legacy May Be Illegal.

“The oldest monument under review is the 1996 Grand Staircase-Escalante monument; the most recent is Bears Ears, a twin rock formation that was Obama’s last designation. (Both are southern Utah monuments criticized by local and state officials who oppose federal land control and want to keep the areas open for mining, logging, and grazing.) Everything in between, including Obama’s record 554 million acres of land and ocean set aside, will be up for review until August 24, 120 days from when Trump signs the executive order. Interior Secretary Ryan Zinke will then recommend legislative or executive changes to monument designations. Trump’s next actions could include shrinking them or revoking their designation entirely.

“But as Zinke, a self-described Teddy Roosevelt conservationist, admitted on a White House press call on Tuesday night, it’s ‘untested whether the president can do that.’ ”

“While not naming California specifically, the order means parts of the Pacific Ocean, as well as the Atlantic and Arctic oceans, that aren’t part of the federal government’s oil leasing program could be open to drilling. Those areas include sought-after waters off La Jolla, Malibu and Mendocino. Sanctuary sites established within the past decade, including an addition to the Greater Farallones National Marine Sanctuary off the Sonoma Coast, could also lose their protective status and become vulnerable. The order would also make it more difficult to establish new sanctuaries.”

Thinking specifically about La Jolla and Malibu, tarnishing these areas is almost unimaginable.

There is an alternative to the destructive “dreams” of stripping the earth bare.

“Sens. Bernie Sanders (I-Vt.), Jeff Merkley (D-Ore.), and Edward J. Markey (D-Mass.) on Thursday introduced legislation to build a 100 percent renewable energy economy by 2050—a bill that environmental group 350.org previously termed ‘the most ambitious piece of climate legislation Congress has ever seen,’ although others caution that it is not enough to meet the real challenges of climate change,” according to Nadia Prupis of Common Dreams article, 100 Percent Renewable Energy by 2050: Senators Introduce ‘Most Ambitious’ Climate Plan Ever.

“The ‘100 by 50’ Act calls for 50 percent of U.S. electricity to be produced by renewable energy sources like wind or solar by 2030, and 100 percent by 2050. It would require zero carbon emission vehicle standards and prohibit federal approval of oil and gas pipelines, among other measures.

” ‘With an anti-science Congress and President in power right now, some might doubt that this is the right time to push for a bold new strategy to tackle climate change and make a massive fundamental shift in the way we produce energy,’ Merkley wrote in a Facebook post earlier this month when he announced plans to introduce the bill. ‘But the fact is, we don’t have four years to wait to begin this rapid transition. We must act now.’ ”

A key item needs to be addressed when considering 100% renewable technology, why have advanced technologies such as E-Cat and hydrogen power as well as Keshe technology not been included in the mix? Will there ever be a real breakthrough without addressing the suppression and those that wish to rape and pillage the earth? Probably not.