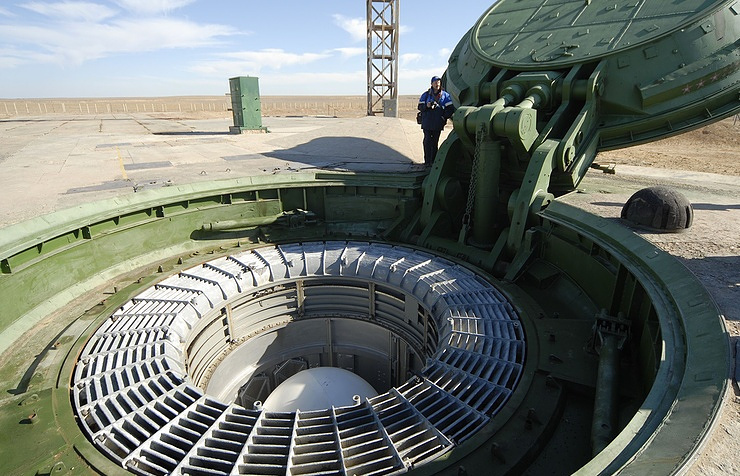 Editor’s note:  As Trump takes the gloves off and scraps existing missile treaties, Russia is putting into service a heavy missile capable to carrying up to 20 warheads with far higher accuracy and reliability than anything the US has in the pipeline.

No existing or planned missile defense system will be able to deal with this threat or the things the media never talks about, the stealth long range and hypersonic cruise missiles launched from fishing trawlers and from inside shipping containers.

Worse still, a totalitarian US playing “mad bomber” around the world has created a climate where seeing the United States burned to ashes is now on the top of everyone’s Christmas list but those of us who still live here.

Tass and SouthFront: The Makeyev Rocket Design Bureau just recently published the first image of the newest heavy intercontinental ballistic missile, the RS-28 Sarmat (also known under NATO’s reporting name SS-X-30). It is to replace its predecessor, the R36M2 Voyevoda (or NATO reporting name – the SS-18 Satan). According to a TASS source, the SS-X-30 is to be authorized for service at the end of 2018.

The missile’s parameters remain a state secret, so its features can be discussed only on the basis of open sources and the opinions of military specialists. The SS-X-30 is a heavy inter-continental ballistic missile (ICBM) being developed by the Makeyev Rocket Design Bureau. According to some estimates, the missile will have a liftoff mass of 100 tonnes, including a ten-tonne payload. It is to replace the world’s most powerful strategic missile, the Voyevoda (211 tonnes, including a payload of 8.8 tonnes). Its NATO reporting name is the SS-18 Satan.

The Soviet Union once had 308 SS-18s. Their manufacturer – Yuzhmash – is located in the city of Dnepropetrovsk, Ukraine. The first Soviet-US Strategic Arms Reduction Treaty (START-1) materialized largely because Washington was under the strongest impression of the missile’s capabilities, in particular, its multiple warhead consisting of ten independently targetable re-entry vehicles each having a yield of 750 kilotonnesViktor LitovkinTASS military analyst After the Soviet Union’s breakup, the plant in Dnepropetrovsk halted the production of SS-18s. Under START-1 terms, Russia scrapped 154 missiles. Those still on duty were to be withdrawn from operation after the expiration of their life cycles.

According to open sources, 46 silo-launched missiles of that class remain on duty. The SS-X-30 missiles are to take their place, for which the silos will have to be upgraded.

In contrast to its predecessor (the SS-18) the SS-X-30 will boast far smaller liftoff mass and a greater range of flight.

Whereas the SS-18’s range of operation was 11,000 kilometers, the SS-X-30 will be able to hit targets as far as 17,000 kilometers away and, as its designers promise, to approach the targets along flight paths crossing the South Pole, from where they are least-expected and where no missile shields are being createdViktor LitovkinTASS military analyst

Each SS-X-30 will carry not 10 nuclear warheads, but no fewer than 15, located in the missile’s forwardmost section. These independently targetable 150-300-kilotonne re-entry vehicles, arranged in a grape cluster-like fashion, will be able to separate from the cluster one by one when the pre-loaded program issues the order to attack the selected target.

The re-entry vehicle will be flying towards the target at hypersonic speeds (of Mach 17). The flight path’s altitude and direction will be changing all the time, thus making the weapon immune to any missile defenses – current or future one, even those relying on space-based elements. “For the SS-X-30 it makes no difference if there is a missile defense or if there is none. It will slip through unnoticed,” missile specialists sayViktor LitovkinTASS military analyst

Mass media have already mentioned the hypersonic re-entry vehicles’ name – Yu-71. Their accuracy is reportedly a hundred times greater than that of the SS-18 warheads.

This allows for arming the SS-X-30 missiles with kinetic energy warheads that destroy strategic enemy targets with a mechanical impact without a nuclear explosion. Using lower yield warheads is another alternativeViktor LitovkinTASS military analyst

Whereas each of the SS-18’s MIRVs had a yield of 750 kilotonnes and the circular error probable (CEP) was not very important, because the explosion would raze everything to the ground within a range of dozens of kilometers, the SS-X-30’s high accuracy warheads boast a far better CEP, so the predecessor’s heavy yield will be no longer necessary.

Litovkin believes that a 150-300 kilotonne blast will be enough to cope with any task. The lower the yield and mass of each MIRV, then the more of these that can be loaded into the missile’s front section.

Commander of Russia’s Strategic Missile Force, Colonel-General Sergey Karakayev, says “the contribution of the stationary group of heavy ICBMs (SS-18 or SS-X-30) in contrast to that of a stationary group of light ICBMs (Topol-M or Yars) will be four times greater by all parameters that are used to gauge the likely combat effectiveness of the Strategic Missile Force.”

How many SS-X-30 missiles will go operational in Russia is unknown, but as Litovkin says, it is easy to guess.

SS-18s will vacate at least 154 silos (another 154 were destroyed in controlled explosions under START-1 terms). Although not all of the silos will be re-equipped to accommodate the new missile, they will have to fit in with the parameters of START-3, which allows Russia and the United States to have 700 operational delivery vehicles armed with a total of 1,550 warheads by February 5, 2018

Each SS-X-30 is to carry 15 warheads. According to open sources, Russia at the moment has 521 operational delivery vehicles and 1,735 warheads (and the United States, 741 and 1,481 accordingly).

START-3 may be prolonged after its expiration in 2021 by mutual agreement for another five years. If that happens, says Litovkin, Russia will have fewer SS-X-30s than SS-18s. Alongside the SS-X-30s, Russia has at its disposal other delivery vehicles (both ground- and sea-launched) and strategic bombers. All are on the START-3 list.

What function is the SS-X-30 expected to perform?

TASS military analyst Viktor Litovkin believes the SS-X-30, just as the Strategic Missile Force, is crucial to deterring a likely aggressor and also to replacing the SS-18, which by the time START-3 expires, will have come to the end of the its guaranteed life cycle.

On the other hand, says Major-General Vladimir Dvorkin, Chief Research Fellow at the Institute of World Economy and International Relations (IMEMO) the solid propellant mobile strategic missiles Topol-M, Yars and Rubezh and, in the longer term, the strategic missile carrying trains Barguzin would be quite enough for deterrence.

In contrast to the SS-18, the SS-X-30 missile is an easy target for the enemy’s first strike. Russia will never be the first to launch a nuclear missile attack, although such an opportunity is reserved in the country’s military doctrineVladimir DvorkinDr. Sc. (Tech), Major-General, ret.

The former chief of the Strategic Missile Force Staff, and current adviser to the missile force commander, Viktor Yesin, agrees with Dvorkin, but only partially.

We have no intention of being the first to deliver a nuclear strike. The SS-X-30 is a weapon of retaliation. We will be able to launch them while enemy missiles are still on the way. We are building Voronezh-class missile attack warning radars along the borders capable of identifying any approaching missiles. Hypothetical enemies are aware of that. The SS-X-30 will guarantee our securityViktor YesinColonel General, adviser to the Strategic Missile Force commander