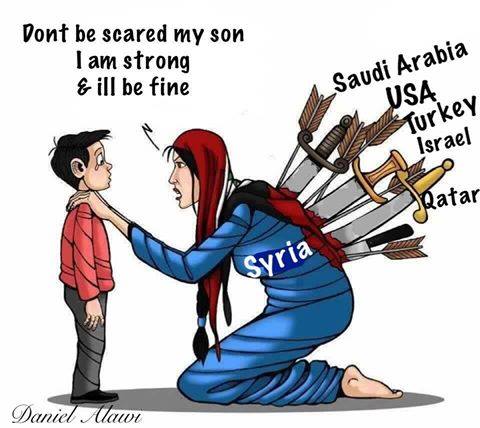 According to the Neoconservatives in America, Saudi Arabia is not a country that needs to be challenged on moral grounds, despite the fact that the country has been shown to be an accomplice in the 9/11 attack.[1] Saudi Arabia even “warns of economic fallout if Congress passes 9/11 bill,”[2] an implicit admission which basically puts their political feet firmly in mid-air.

But that again doesn’t give politicians in Washington goosebumps because Saudi Arabia has been working with the Israeli regime to politically destabilize Iran.[3] When the Iran deal was passed during the Obama administration, Israel, the Neocons, and indeed Saudi Arabia worked tirelessly to kill it.[4] As the New York Times itself put it then, “Saudi Arabia and Israel share a common opposition.”[5] Even Tablet, a Jewish magazine, reported back in 2013 that both Israel and Saudi Arabia were “co-planning [an] Iran attack.”[6]

If New World Order agents and Neocon puppets like John McCain and Lindsey Graham were really concerned about true democracy and freedom, they would have challenged Saudi Arabia long ago. Saudi Arabia has recently sentenced a man by the name of Ahmad Al-Shamri to death precisely because he styled himself an atheist. But that’s just the beginning:

“Saudi Arabia hanged at least 154 prisoners in 2016, according to a report by Amnesty International. The NGO added that the country’s death sentences for some crimes did not allow ‘any possibility of taking into account the defendant’s personal circumstances or the circumstances of the particular offence.’

“In January 2016 Saudi Arabia drew international condemnation following the execution of prominent Shi’ite cleric Nimr al-Nimr. Nimr, who became the figurehead of a 2011 protest movement calling for rights for Saudi Arabia’s Shi’ite minority in the impoverished Qatif region, was killed with 47 other men, Saudi Arabia’s largest mass execution in decades.”[7]

“The kingdom killed 102 convicted criminals in the first six months of 2015 alone, putting it on course to beat its 1995 record number for the calendar year of 192. Those killed included children under the age of 18 at the time of the offence, and disabled people…. According to a new 44-page report released by the charity today, at least 2,208 people have been executed in Saudi Arabia since January 1985.”[8]

Not a single Neoconservative or New World Order agent has said anything about this because Saudi Arabia is again conniving with the Israel regime.

“In the lawless jungle that is the international system, nations seldom have the luxury of choosing good over evil. Usually, it is a matter of choosing a lesser evil over a greater evil. So it was in World War II, when we allied with Stalin to stop Hitler, and so it is today in the case of Saudi Arabia versus Iran.

“The two countries are in a contest for power and influence across the Middle East. Both are human-rights violators, but we should make no mistake that Iran is far worse from the American perspective: not only morally but also strategically.”[9]

He’s got to be kidding. This joker is trying to tell us all that Hitler was worse than Stalin! You see, Boot is positing crazy statements like this not because he doesn’t have access to the historical record. In fact, Boot is a historian. He knows that Stalin is arguably the biggest mass murderer in the history of mankind. Boot knows that the Bolshevik Revolution, which spread its essentially diabolical wings in countries like China and Vietnam, was responsible for at least one hundred million lives in the twentieth century alone.[10]

Boot cannot tell the truth about these issues because he and his brethren have metaphysically and categorically rejected Logos, which is foundational to any historical enterprise. For these people, truth is that which is congruent with their own ideology. As the Talmud declares, it is all right to lie to the Goyim. So, we can ignore people like Boot because they have no interest whatsoever in pursuing the truth.

But what about Neocon puppets like John McCain? Are they really concerned about pursuing the truth in the political landscape? No. In fact, people like McCain are chasing after the almighty dollar. McCain has collected millions of dollars from Saudi Arabia.[11]

The McCain Institute Foundation received one million dollars from Saudi Arabia in 2014, and when McCain was confronted with this vital issue, his brilliant response was that he had nothing to do with his own institute![12] He said:

“I’m proud that the institute is named after me, but I have nothing to do with it — except that they use my name just as the Goldwater Institute uses Goldwater’s name.”[13]

McCain could never explain that he was the one who said unequivocally: “Thank God for the Saudis and Prince Bandar, and for our Qatari friends.”[14] He also could not explain the fact that he worked tirelessly to “override President Barack Obama’s veto of legislation that would allow families of the victims of the Sept. 11, 2001 attacks to sue Saudi Arabia.”[15]

One Qatari official declared that Saudi Arabia has supported ISIS for years, but again McCain found it profitable to make a deal with a terrorist state.