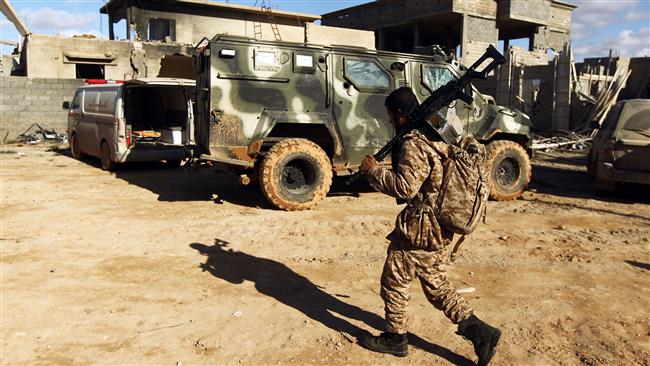 The head of Libya’s UN-backed unity government and a rival military commander have agreed to find a solution to the country’s six-year-old conflict.

Fayez al-Sarraj, the leader of the Government of National Accord (GNA), and Field Marshal Khalifa Haftar, whose fighters control most of eastern Libya including key oil ports, held a rare meeting in the United Arab Emirates on Tuesday.

The two sides issued separate statements on Wednesday, urging a resolution to Libya’s political and economic conflict. They also stressed the importance of unifying efforts to fight Takfiri terrorist groups.

Libya has faced a power vacuum since a US-led military intervention resulted in the downfall of its longtime dictator Muammar Gaddafi in 2011. The country has been grappling with chaos and the emergence of numerous militant groups, including Daesh Takfiri terrorists who are concentrated in Iraq and Syria.

The country now has two governments, one based in the capital, Tripoli, and the other based in the far east in the city of Tobruk. The United Nations supervised a series of negotiations in 2015 that led to the establishment of the GNA late that year. However, both Haftar and the eastern-based parliament have refused to recognize the UN-backed unity government.

The formation of a new unified Libyan army loomed large in the negotiations.

Sarraj said in his statement that the two sides had agreed to put in place “a strategy… to form a unified Libyan army” under civil control.

Haftar’s statement said the two parties had agreed to allow “the military establishment… to fully play its role in the fight against terrorism.”

According to the two statements, Sarraj and Haftar agreed to put an end to violence in southern Libya, where forces loyal to the Libyan National Army (LNA) commanded by General Haftar had launched an offensive to seize Tamenhant airbase on the outskirts of the southern city of Sabha from armed militants backing the GNA.