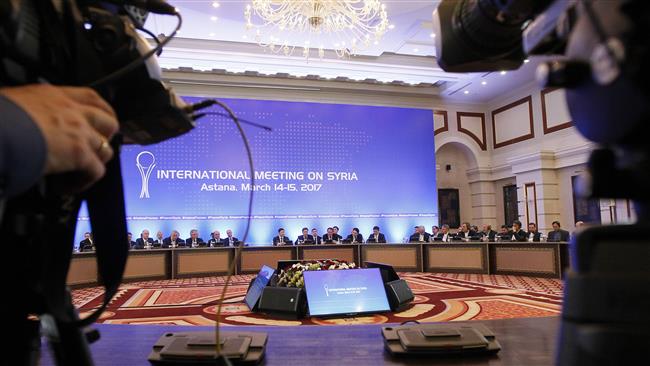 [ Editor’s Note: It comes as no surprise that the Saudi rump group, the High Negotiation Committee (HNC) would throw this monkey wrench into the talks now.

Almost everywhere that combat is going on, some civilians are in the way, and the jihadis and Syrian opposition use them as human shields and their corpses as “proof” of Assad being the ruthless tyrant. They forget that we are onto their scam.

The key part of this article is the issue of “deescalation” and “security zones” being put squarely on the table for militant-held areas, a slight but important adjustment to the previous “safe zone” areas, which were primarily no fly zones. There are few details defining the terms, but the jointly controlled checkpoints would be a huge step forward, if this actually happens.

The setting up of “safe zones” appears to be step two, and then the beginning of a process of disarmament, with a May 22 target date being floated. This seems a bit pie-in-the-sky, but the jihadis might want a respite from the fighting to rest and refurbish and to recover from the beating they have been getting in Idlib.

Damascus would like to have these quiet areas, so it can shift troops into ISIS combat areas and continue recovering lost territory and infrastructure, especially the oil and gas fields. And the Russian air campaign can focus more on ISIS.

But with Turkey as one of the guarantors, there is no mention of any international monitoring of the Turkish border, regarding weapons and ammo, including the TOWS continuing to flow into Syria.

This is what fueled the jihadi Hama offensive, which has tied up some of the SAA’s best units in defeating it – units that could have been fighting ISIS. And there is nothing being mentioned about Turkey ending its attacks on the YPG Kurds, who are one of the main forces fighting ISIS… Jim W. Dean ]

The so-called Syrian National Coalition (SNC) says the opposition is halting its participation in the latest round of the Astana peace talks aimed at bringing an end to the deadly conflict in the Arab country.

SNC spokesman Ahmad Ramadan said on Wednesday that the opposition “delegation is suspending the meetings” over alleged airstrikes on civilians.

“The suspension will continue until shelling stops across all Syria,” he added.

The move came hours after the fourth round of the talks, mediated by Iran, Russia and Turkey, began with a series of bilateral meetings in the Kazakh capital earlier in the day.

Reacting to the development, Aidarbek Tumatov, a senior Kazakh Foreign Ministry official, said he expected that the Syria opposition would return to the negotiating table on Thursday.

“I hope that tomorrow the opposition will again take part (in the talks),” Tumatov said.

The Astana discussions were set to focus on a Russian plan to resolve the Syria crisis that began in March 2011.

The plan calls for the creation of “de-escalation zones” in militant-held areas in the Syrian provinces of Idlib and Homs as well as the Eastern Ghouta region near the Syrian capital, Damascus, AFP reported, citing a version of the initiative provided by a source close to the opposition.

The Russian proposal seeks to “put an immediate end to the violence” gripping Syria and “provide the conditions for the safe, voluntary return of refugees”. It further urges the creation of “security zones” with checkpoints and monitoring centers manned by government troops and militants.

The plan also reportedly tasks Turkey, Iran and Russia — as the guarantors of the agreement — with setting up a joint working group to draft maps of the safe zones by May 22 and monitoring a process of “disarmament.”

Additionally, the trio would help the fight against extremist factions including the Daesh Takfiri terrorist group. Tumatov confirmed that the delegations were discussing a proposal for safe zones in Syria.

“If the guarantor countries agree and sign the document then accordingly Damascus and the opposition will be obliged to fulfill it,” the official told the Interfax news agency.

The first round of the Astana talks between Syria’s warring sides took place on January 23-24, followed by the second round on February 15-16 and the third round on March 14-15.

Syria blames the conflict in the country on some Western states and their regional allies that have long pushed for the ouster of the Damascus government.