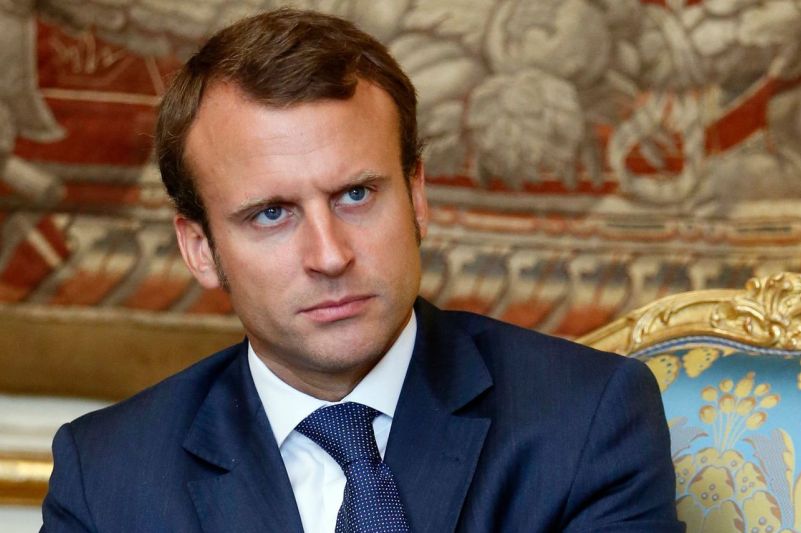 [ Editor’s Note: The fairy tale of Emmanuel Macron emerging as an “organic candidate”, new party and all, out of the blue, always struck me as the Deep State crowd testing if P.T. Barnum’s old maxim, “There’s a sucker born every minute” was still in play. It is.

Macron was obviously put in play by someone, not only with deep pockets, but enough juice to make sure he got good press coverage as a “fresh alternative”. Macron’s media angels saw to it that Le Pen and Fillon had lots of corruption charge coverage – a standard tactic.

He was way too young and inexperienced to be taken seriously as having any ability to impact the ongoing chaos in Europe. But that was not a problem for him, as his shadow advisers and backers will be handling all of that for him.

Phil Butler gives a peek behind the curtain into “Who dun it” land. Working out of Germany, he is closer to a lot of sources than we are on this side of the pond. As to Macron’s tribal affiliations, well, not even a whisper was mentioned about that in the corporate media – a long tradition when you consider who owns corporate media.

The bright side this all is that charges of countries interfering in other countries’ elections is no longer a verboten topic. Quite the contrary, it is in vogue now. But any mention of well-heeled intelligence agencies doing such is still discussed only in whispers and masked internet accounts.

If Macron pulls this off, expect to see more “organic candidates” and parties emerge in the future, where that dynamic works for a particularly country. The fingerprints will often be the same, which is their weakness, and how we will be able to get them in the end. “Ask not for who the hammer falls, it falls on thee”. We will know on Sunday… Jim W. Dean ]

In a redux of “Hillary is bound to win”, Reuters and the mainstream are once again pulling out all the stops prophesying Marine Le Pen’s impending loss to Rothschild’s candidate, Emmanuel Macron (The Saker outlines).

While the corporate media’s undying support for the globalists comes as no surprise, the fact that Rothschild is sending in the manservant reveals a desperation. Apparently, France is the key battlefield in the desperate battle for control of Europe.

My colleagues and I often joke about Jacob Rothschild’s man “Reginald”, a make-believe manservant who does all the dirty work for the world’s most powerful man. Whether or not we choose to accept it, the Rothschild’s immeasurable wealth and influence is a reality. And the fact the family has not already been put on billboards as the beneficiaries of chaos is proof positive.

Only the truly powerful can stay so far out of the limelight, even despite epic dealings underneath and all around the world. It was Rothschild remember, who held in trust the Yukos oil shares for Putin’s worst enemy, Mikhael Khodorkovsky.

But if the truth be known, the ousted Yukos oligarch was probably leveraging Russian assets for his bosses in the UK. Who can say for sure, but Vladimir Putin kicking Rothschild and George Soros out of Russia was not on account of petty dealings.

Now France and the EU hang in the balance, and it looks like Reginald (or Drakula’s lunatic aid Renfield one) is being placed in Paris. Come to think of it, Macron does favor the Bram Stoker character that served his master so well.

Seriously, if you compare the wild-eyed stare of actor Alexander Granach in the film Nosferatu of 1922 with Macron’s grinning-idiot poses, you’ll swear the financier is a reincarnated minion of the world’s most famous vampire. How anybody could even consider voting for this man falls into the realm of witch spells and hypnotic Dracula stares.

Returning to partial reality, I am struck by the sheer magnitude of media arrayed against Marine Le Pen, and at how effective some of the propaganda is becoming. With no evidence to support claims she is a racist, Twitter and Facebook peeps share epithets about her as if they know her personally. The PR game against these contra-globalist candidates is immense, staggeringly expensive, and unrelenting.

Just try to find a positive cartoon or image of Le Pen, and you’ll get a sense of the media deck stacked against her. Europe is being terrorized almost daily, France is ground zero for Islamic lunatics, and right next door Germany is creating a kind of Fourth Reich propaganda machine. Welcome to the nut house where Marine Le Pen is a bad choice to counterbalance insanity. For those unfamiliar, Germany is now deploying tools to censor social media before the upcoming election process there. The so-called “Ministry of Truth” is working with Facebook to enable a system that (if I am correct) filter out any message the Germans do not want in their country.

German media is already 99% controlled by the globalists at Bertelsmann, Axel Springer and within the government, and now Angela Merkel’s aids want to block any message in social media that is not “party line”.

On top of all this, Merkel’s moves are completely legal inside Germany, so it’s going to happen. What’s most disturbing though, is the fact the Truth Ministry is not designed just for Germany. I believe Facebook is working with the Germans and testing the system on the French election process.

A positive story I wrote this weekend was mysteriously blocked from sharing on Facebook by a never before seen (in my experience) “bot” from Facebook. The sceenshot you see above shows an “Unknown Facebook Bot” hitting a single article on my personal blog, an article everyone BUT me could share with followers.

I have all the screens and the details on the above mentioned “effort”, but the larger game is what is scary stuff. If the globalists can completely filter news and information, and at the micro-level, then Orwell’s famous world can come into being for real. A lot of people have made insinuations this is happening, but the capability to snuff out an idea is upon us.

The Le Pen piece I wrote was not fake news, it was opinion based on factual research and professional geopolitical analysis. Le Pen will be in almost exactly the same position French President Charles De Gaulle was after France and Germany signed the Élysée Treaty in 1962, should she be elected president. Without going into a history lesson, De Gaulle found himself constantly fighting the influence of former allies the United States and Britain within Europe – and the Germans were simply acting as vassals to those powers as they do today.

For all his faulty, Charles De Gaulle was the ultimate French patriot. His argument against Germany’s Chancellor Konrad Adenauer (who was set in place by the allies) was to reduce American control. In the end De Gaulle lost out, as Adenauer formed the CDU firmly up under America’s wings.

Today we see the long-lived effects West German policy exacts on the whole of Germany. And this country’s unparalleled control of EU policy is a failed and miserable mess. Half the EU is under dire austerity, and the other half has to go to Germany for handouts. In France, the fires of rebellion against globalism and loss of identity identify with Marine Le Pen.

This is not so because she is some Nazi, it is so because she is a traditional patriot, like De Gaulle. She is also the biggest threat to people like Rothschild that family has seen in half a century. So hacking everybody’s PCs and Facebook accounts is acceptable, now that the game gets so close to the homes of the elites.

Marine Le Pen exhibits a great deal of courage. Sure, in the end she may be swayed like Donald Trump has surely been swayed, to mediate policies against this globalist order. Remember Angela Merkel in Washington March 17th, and on March 30 Secretary of State Rex Tillerson and President Trump announced a big policy reversal on Russia and on Syria!

What do you imagine happened? While I still hold out hope Donald Trump will strategize around the European elites, the grip the New Democratic Order has on control mechanisms is immense. If I am right, and if this Truth Ministry gave the okay to test a geo-policy and social media expert’s accounts with the French elections – then I think we are assured of seeing Germany’s decision completely orchestrated.

Remember, the WikiLeaks revelations about Hillary Clinton’s campaign follies were not devastating because of graft and malfeasance associated with the Clinton Foundation or donations. They were riveting because she and her party cheated in an election primary. Cheating, cheaters, lies under the guise of truth, you get it I know.

In summary, my story “Why Marine Le Pen Really Really Matters” was blocked and is under intense scrutiny by Linux users now, for good reason. I suspect some Facebook coders are on my site evaluating how best to “tweak” the “truth system”, while at the same time French, British and even Japanese “experts” are trying to discover just who and what they are up against.

We laughed earlier this morning, Eehoff and I, about my blog traffic never being more interesting, with hackers investigating other hackers and this mystery Facebook bot. Then again, as we quipped, the normal person would just write all of this off as a “glitch”, and Le Pen being the crucible of a new and modern European history as being a conspiracy theory.

After all, how can France be the eternal battleground of Europe? Oh, that’s right, because it is.

Phil Butler, is a policy investigator and analyst, a political scientist and expert on Eastern Europe, exclusively for the online magazine “New Eastern Outlook