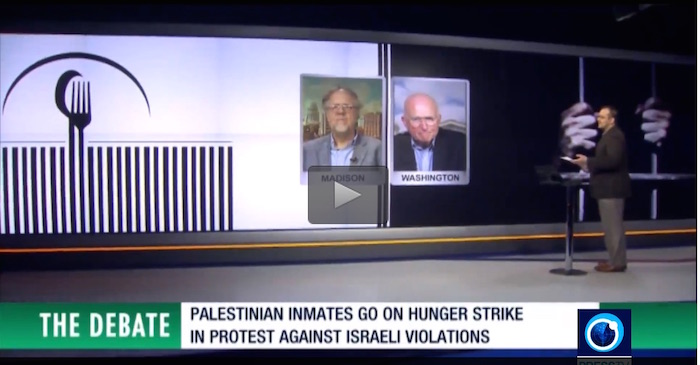 A hunger strike by more than 1,500 Palestinian prisoners in protest against administrative detentions and intolerable conditions at Israeli jails has entered its second week. Palestinians and people around the world have been showing their solidarity with the inmates. However, the defiant Tel Aviv regime has refused to take any measures to ease the situation at its prisons. Press TV has interviewed Kevin Barrett, editor of Veterans Today from Madison, and Lawrence J. Korb, a senior fellow at the Center for American Progress from Washington, to discuss the situation.

Kevin Barrett predicted that the Palestinian resistance and public pressure will eventually force Israel to back off and abandon its harsh tactics against Palestinians.

“The Palestinian people are likely to prevail” and “the Israelis are going to have to listen and finally back down,” the commentator said.

“The problem that the Israelis have right now is a public relations nightmare that is getting worse all the time for them,” Barrett added.

Pointing to the background of Israeli crimes against Palestinians, he noted that the regime has been waging a non-stop campaign of terrorism against Palestine ever since they came to the region, warning however that “terrorism is going to backfire in the court of public opinion.”

Israeli prisons hold around 6,500 Palestinians, many of whom are being held under the policy of administrative detention, which allows holding Palestinians without charge or trial for a period of six months, subject to indefinite renewals.

The call to hunger strike was made by Marwan Barghouti, a former Fatah leader and parliamentarian, who is serving time in an Israeli jail.

He further argued that about 95 percent of Israelis support the genocidal policies of their leaders against the Palestinians population, adding that hawkish Prime Minister Benjamin Netanyahu and his minister of military affairs Avigdor Lieberman represent the majority of Israeli public opinion.

Elsewhere, the political expert hailed attempts made by alternative media to present a realistic picture of the events in Palestine, saying, “People are starting to understand the real situation in occupied Palestine.”

Although Western media are trying to cover up Israeli atrocities against the Palestinian people, “this kind of extremism and oppression that is getting worse and worse and worse in Israel cannot continue,” he added.

For his part, Korb said these protests by Palestinian prisoners will have an impact on Israel, because there is no unanimity about how to handle the situation.

The analyst also noted that while there are a lot of Palestinian prisoners who have not been yet tried, “about 1,200 of the people have been convicted in open trials.”

Pointing to an op-ed published by the New York Times on April 16, 2017, in which Barghouti underlined the reasons behind the hunger strike campaign, Korb said the publicity will make things very hard for Israel.

He said Barghouti is a well-known figure in the international arena, and therefore Israeli authorities are unlikely to take punitive action against him for his article in the American newspaper.