Academic freedom is being crucified at the University of Lethbridge, where Professor of Globalization Studies Anthony Hall is the target of a bizarre witch hunt led by President and Vice Chancellor Mike Mahon.

The ongoing persecution of Professor Hall for thoughtcrime has gone even further down the rabbit hole during the past few weeks, as Hall has finally been allowed to see the charges against him – charges that were debunked a few months ago when the Alberta Human Rights Commission (AHRC) found in favor of Professor Hall and against his persecutors.

But Mahon wouldn’t take no for an answer. He appealed the case, and the AHRC recently agreed to hear the appeal. Ecstatic, Mahon fired off a letter to all and sundry deceptively claiming that the AHRC “accepted” the appeal – without even mentioning their decision in favor of Professor Hall! This is just one of the lies and misrepresentations from Mahon. One of Hall’s faculty colleagues writes: “These misrepresentations (by Mahon) must be stopped.”

Among the many bizarre aspects of the case is that Hall never found out what he was charged with until last week, even though Mahon suspended him on October 4th, 2016! So not only was Professor Hall not given any chance whatsoever to defend himself, but he was not allowed to know what thoughtcrime he had allegedly committed. Nor was he informed when the AHRC found in his favor.

The national and local (Lethbridge) faculty associations are furious. Mahon’s dictatorial power play violates the procedures of governance laid out in the Faculty Handbook, and makes a complete mockery of academic freedom. It may be the most absurdly arbitrary and capricious attack on academic freedom in the whole history of the North American academy.

Now Mahon is appealing the AHRC’s pro-Tony-Hall ruling and has finally made the charges public. Here is the summary of the thoughtcrimes of Professor Anthony Hall: 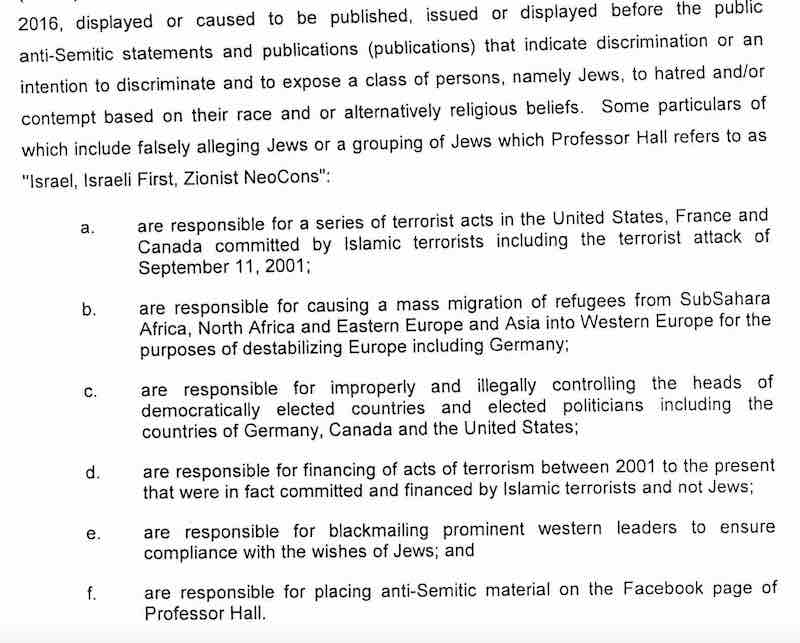 (Neocon Zionists) are responsible for improperly and illegally controlling the heads of democratically elected countries and elected politicians including the countries of Germany, Canada and the United States.

I taught college-level writing for almost two decades, and would never have even graded a paper with a sentence like that in it. It would have been returned to the student for a rewrite.

The English 101 student would also have been required to eliminate the unnecessary repetition of item d, which merely re-states item a.

And what an amazing charge that is! The writer apparently thinks that it is just fine to blame Muslims for terrorist events without even looking at the evidence. But those of us who carefully research the evidence surrounding such events as 9/11, Charlie Hebdo, etc. and conclude that these are false flag events by the Zionist enemies of Muslims, are apparently committing thoughtcrime.

What we have here is the persecution of a highly-esteemed college professor who backs his assertions with logic and evidence, by someone who couldn’t pass English 101 or Remedial Critical Thinking. Such “charges” would boggle the imaginations of Franz Kafka or Lewis Carroll.

Let’s break down this elementary logical fallacy, sometimes known as “the fallacy of alleged certainty” or “assuming the conclusion.”

Argument: “Everybody knows Muslims did 9/11, so those who blame someone else must be prejudiced against whomever they blame.”

Description: Asserting a conclusion without evidence or premises, through a statement that makes the conclusion appear certain when, in fact, it is not.

Everybody knows that X is true.

Academicians are not allowed to just assume things are true. (That includes controversial things like assertions about 9/11 and the holocaust.) They are required to hash out their many differences through rational-empirical argument. If his colleagues have a problem with Professor Anthony Hall’s ideas, they must refute them. If they can persuasively show that Professor Hall is wrong, he must withdraw or modify his assertions.

But that has not happened. Why not? Because Hall’s controversial interpretations are backed up by voluminous evidence, which would become better known as the result of any serious debate. So his persecutors seek to silence him by calling him names, while avoiding any actual rational-empirical debate on the issues they raise.

I have proposed to Professor Hall that a series of seminars be held in which the six charges against him (actually five charges and one repetition) be subjected to scholarly analysis and careful debate. These seminars will feature professors and Ph.D. level scholars who believe that academic freedom requires the academy to police itself by carefully and thoughtfully considering even the most controversial ideas.

Are the above-listed statements that purport to summarize Professor Hall’s “illegal” assertions about terrorism, immigration, the deep state, and blackmailed politicians defensible as they stand? If not, how might they be rephrased to make them defensible?

Polls show about 80% of Muslims reject the official account of 9/11.  Are their beliefs – despite being backed by logic and evidence – illegal in Canada?

Obviously what we need here is debate, discussion, and rational-empirical argument by qualified scholars – not shaming, censorship and witch-hunts by people who need to work on their writing and thinking skills. 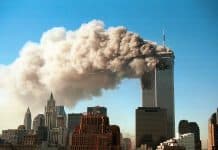 21 Years Later: Did Israel Nuke The United States of America on 9/11?