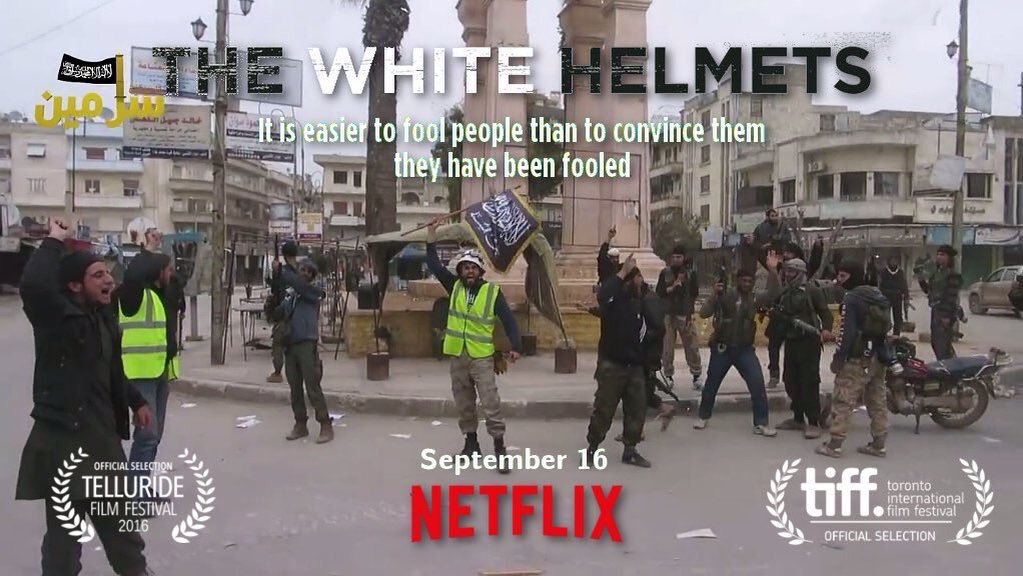 
Bernie Sanders is now an apologist for the categorical lie that Assad used chemical weapons on his own people. And who told him this? The White Helmets! Sanders declared:

“As we try to come up with a plan to end the devastating war in Syria, it’s very important to hear from those who are experiencing it firsthand. The death and destruction taking place in Syria, and the brutality of the Assad regime is almost beyond belief. I was honored to meet with these incredibly brave volunteers, ordinary men and women, who risk their lives to help their fellow citizens.”[1]

The White Helmets was obviously looking for a political sucker in America—and Sanders happened to be one of them. Mounir Mustafa, the group’s deputy head, said:

“It was important for us to meet Sen. Sanders and other American politicians so we could explain what is happening to civilians who are under attack from all sides inside Syria. Twenty-four hospitals have been bombed in the last month alone, and many areas are subject to daily airstrikes.

“In the last week, 12 White Helmets have been targeted and killed while rescuing others. We hope that Sen. Sanders stands with us in our humanitarian mission to save lives and uses his voice to call for an end to all attacks on civilians.”[2]

Ask yourself this question: has the White Helmets been able to explain what is actually happening to civilians “from all sides inside Syria”? Has the group really told the West how ISIS, al-Nusra, and al-Qaeda really butchered civilians? Has the group told the West that Assad, with the help of Russia, is fighting ISIS and al-Nusra? Or are they trying to demonize both Russia and Assad for fighting against ISIS in the region? Is the White Helmets conniving with the enemy?

As Gordon Duff has pointed out, the White Helmets is an organization that is known to provide fake news about Syria. Jim W. Dean rightly calls them “a slam dunk example of industrialized Fake News.” Maria Zakharova, Director of the Information and Press Department of the Ministry of Foreign Affairs of the Russian Federation, declared that

“The White Helmets not only feel at home in Jabhat al-Nusra and ISIS-controlled territories but openly sympathize with them and provide them with information and even financial support.”

This is not farfetched at all:

“In an interview conducted on April 30 in Bab Al Nairab, East Aleppo, a local Sheikh explained how Al Qaeda and the White Helmets were friendly flatmates:

Q: They were in the same building with Nusra Front/Al Qaeda?

A: Yes, the same building.

Q: Then the White Helmets moved?

A: Yes, they moved across the road.

The White Helmets has been conjuring up accusations against Russia and indeed Syria for months.[3] And sometimes they have been caught red-handed inventing evil things:

“In October, 2015 White Helmets released pictures on its Twitter account purporting to show the aftermath of the Russian bombing campaign against ISIS and assorted terrorists launched on September 30. ‘Russia strike in Homs today. 33 civilians killed including 3 children and 1 @SyriaCivilDef volunteer’ the caption read.

“The picture showed a bleeding girl being held by a ‘Civil Defense’ volunteer and claimed that the child was injured along with a number of other civilians. Unfortunately for the White Helmets, Twitter users immediately exposed the photos as a fraud, since the pictures were actually taken five days prior on September 25, 2015.

“Interestingly enough, the White Helmets, in an attempt to assist drumming up opposition to Vladmir Putin and Russia’s attack on jihadists, also managed to tweet about the horror of Russia’s air strikes hours before Russia’s parliament even granted Putin the authority to use the Air Force in Syria, according to Sputnik.”[4]

[1] Akbar Shahid Ahmed, “Syria’s White Helmets Court Bernie Sanders And Other New Friends,” Huffington Post, May 5, 2017. Thanks to my dear friend and colleague Mark Dankof for sending this article to me.