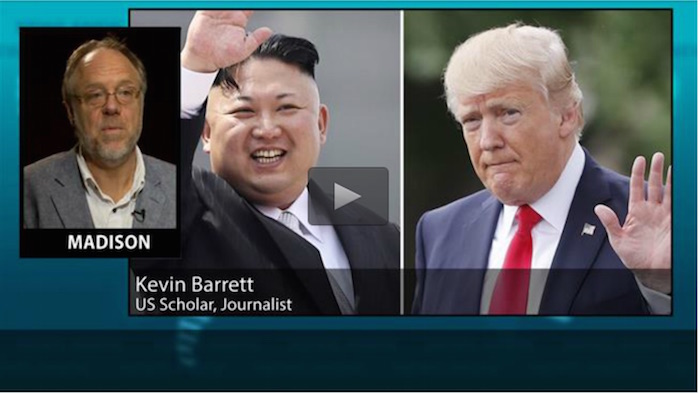 The administration of US President Donald Trump’s various policies with regard to North Korea are rooted in Washington’s long-time desire to monopolize nuclear weapons, says an American analyst.

VT Editor Kevin Barrett, a journalist in Wisconsin, made the remarks while discussing Trump’s call for a meeting with North Korean leader Kim Jong-un amid reports that the CIA had been trying to assassinate him.

Earlier this week, Trump said he “would be honored” to meet the North Korean leader, a day after praising him as “a pretty smart cookie.”

Barrett said the animosity between the North and the US goes back to the Korean War, when the US killed scores of Koreans, specially in the North.

This horrific, genocidal assault on Korea by the United States and the occupation of South Korea ever since naturally has led all Koreans who have any shred of dignity and desire for self-determination to want to fight to keep their independence,” Barrett said. “And that is the real reason for the tensions between the US and North Korea.”

The analyst argued that if Trump was to hold a press conference with Kim and tell the world about the “American genocide” and accept Washington’s mistakes towards Pyongyang and many other nations then we would see real progress towards peace.

Barrett also talked about the “inflammatory” story by North Korea that American intelligence agencies had planned to assassinate Kim in close coordination with Seoul.

The North’s ministry of state security said in a statement on Friday that the CIA “assassination by use of biochemical substances including radioactive substance and nano poisonous substance is the best method that does not require access to the target.”

Barrett said the fact that Pyongyang was revealing the plot news at the same time that Trump was softening his tone was not a coincidence.

“That does mean that regardless of whether the North Korean leadership decides to go along with the softened American tone and perhaps even set up some kind of a high-level meeting, there is [still] a very serious crisis,” he added.

Noting that a possible assassination attempt would lead to a war between the US and North Korea, the analyst said such acts would prompt a “proportionate” response from North Korea.

“So, this does throw the crisis into a whole different level of magnitude,” he added. “One does hope that it will not lead to the worst.”

North Korea has so far carried out 5 nuclear tests and is said to be preparing for a sixth one. It has also stepped up its testing of nuclear-capable missiles.

The US has warned the North of a military confrontation in case it keeps carrying out the tests.