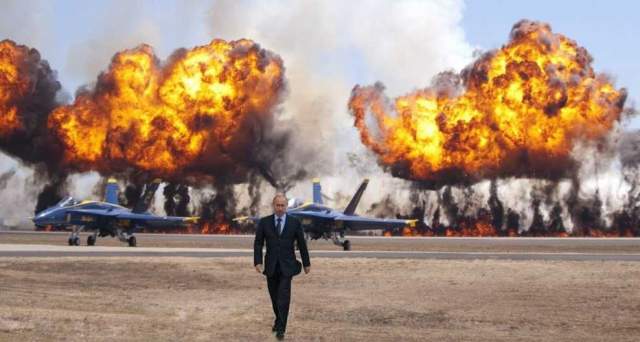 You simply cannot make this stuff up at all. NWO agents like Lindsey Graham and James Comey are still propounding the politically incoherent statement that Russia is the “greatest threat of any nation on Earth”! Why?

Well, Graham and Comey would like to tell us again that Russia hacked the United States and therefore “represents a threat to our democratic process.”[1] America, according to this view, would do nothing of the sort. We’re the good guys. And good guys respect the law and follow international laws. Russia is undemocratic. Russia is evil. As Graham put it last year,

“I don’t understand how any candidate to be leader of the free world could praise Putin, who’s a thug and an autocratic dictator.”[2]

So, Graham actually believes that we should hit Russia really hard for allegedly violating the sovereignty of the United States. 2017, says Graham, “is going to be a year of kicking Russia in the ass in Congress. If you’re worried that we’re not going to look long and hard at what Russia did in our election because Trump won and Republicans are in charge, you don’t need to worry about that. We are. Because if we don’t, it could be the Chinese or Iranians next, it could be the Republicans next time.”[3]

The problem with that stupid idea is that Graham cannot universalize it. Immanuel Kant could have helped Graham here, but Graham is obviously not interested in applying practical reason in the political landscape; Graham is interested in following the dictates of the Israeli regime, which are essentially diabolical and anti-reason.

The real problem is that Russia has really screwed people like Graham up when it comes to the situation in Syria. Graham wants regime change in Syria,[5] but Russia is looking for peaceful resolutions.[6] This is Graham at his best:

“Here’s what I think Assad’s telling Trump by flying from this base: ‘F you.’ And I think he’s making a serious mistake.”[7]

Referencing World War II, the psychopath declared: “ISIS should be Germany, and Assad should be Japan.”[8] In response to Graham’s diabolical ideology in the Middle East, Pat Buchanan wrote back in 2013,

“The true friends of America are those seeking to keep us out of wars, not those maneuvering us in.”[9]