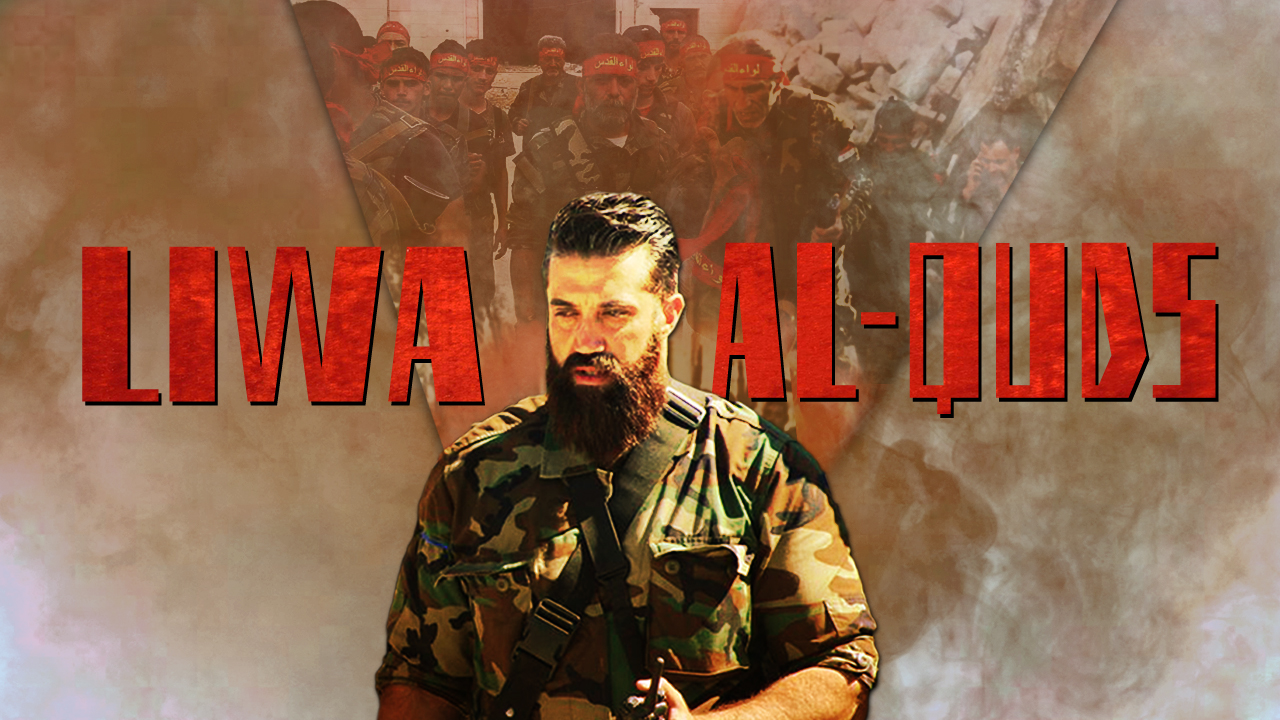 Liwa Al-Quds (or the Al-Quds Brigade) is a Sunni Palestinian pro-government group formed in mid-2013 by Mohammad “Engineer” al-Sa’eed.  The group appeared after Jabhat al-Nusra (the Syrian branch of al-Qaeda), also known as Hayat Tahrir al-Sham and Jabhat Fatah al-Sham, had captured of the Handarat Camp north of Aleppo city and started oppressing its residents.

Mohammad al-Sa’eed established the force with the goal of recapturing the camp and supporting the Syrian Arab Army in its operations inside the city Aleppo and its countryside where government forces were in a very complicated situation at that moment.

Another prominent group member, Colonel Mohammed “Godfather” Rafi, was the Liwa Al-Quds operations commander. Mohammed Rafi was one of the natives of the Handarat Camp and was killed in action during the final stages of the battle for Aleppo in 2016.

Liwa Al-Quds numbers over 9,000 fighters, according to its statements. [Some skeptical sources say that the number is about 4,000-4,500] All of them are volunteers. A majority of the force is Palestinians from Aleppo city and its countryside. The command center of Al-Quds Brigade is currently located in the Handarat Camp. The force is mostly financed by donations from Palestinian businessmen. Nonetheless, some money come from the Palestinian Liberation Army and the Syrian government. The group is composed of three main battalions: Lions of al-Quds Battalion, the Deterrence Battalion and the Lions of al-Shahba’ Battalion.

Since its formation, Liwa Al-Quds have been deeply involved in clashes from the key Syrian city of Aleppo.

In mid-2013, Aleppo was on the verge of fall to Jabhat Al-Nusra and its allies. However, the steadfastness of the Syrian Arab Army, Liwa al-Quds and other pro-government factions allowed the Syrian government to remain in control of a part of the city. Liwa Al-Quds is responsible for repelling numerous jihadist attacks in western and northern Aleppo, including the assaults on the Air Force Intelligence HQ in the district of Zahra’.

Liwa Al-Quds’s participated in a major offensive operation for the first time in the end of 2013 when they cooperated with the Tiger Forces during the Operation Canopus Star. As a result, government forces advanced in northeastern Aleppo capturing the strategic Sheikh Najjar Industrial district and lifting the siege from civilians and service members in the infamous Aleppo central prison.

Liwa al-Quds also participated in the Operation Rainbow in 2014 when its members supported the Tiger Forces’ offensive in western Aleppo. This time, pro-government fighters liberated Bashkuy, Al-Manasher, and Al-Mallah cutting a majority of the rebel supply lines inside Aleppo city.

In 2015, Liwa al-Quds units contributed in the southern Aleppo offensive when government forces seized dozens of villages and hills south of Aleppo city and forced militants to take a defensive posture in the area.

Liwa al-Quds also played an important role in a series of military operations in 2016 that led to the full liberation of the Aleppo city. The Palestinian militia, the Republican Guard, the Tiger Forces, the Desert Hawks and Hezbollah were a core of the government force involved in the effort.

In June-July 2016, Liwa al-Quds and the Tiger Forces took control over the Mallah Farms area and the Castello Road cutting off the only remaining supply line to the rebel-held eastern Aleppo districts.

Liwa al-Quds fighters played an instrumental role repelling the Jabhat al-Nusra-led attack in the Mallah Farms in northwestern Aleppo obliterating most of the militant assault force.

When Jabhat al-Nusra (in that moment, the terrorist group used the brand of Jabhat Fatah al-Sham) managed to temporarily broke the Aleppo pocket capturing a part of the Mallah farms area, Liwa al-Quds members repelled the militant advance and secured the area. This allowed government forces to continue their operations in southern Aleppo without worrying about their rear in Mallah.

Following this, Liwa al-Quds foiled an attack on near the Handarat Camp launched by the besieged insurgents. In September, the militia stormed the Handarat Camp and the nearby Kindi hospital forcing militants to withdraw deeper into the Aleppo city. These operations were an important part of the broader effort aimed at liberating the militant-held districts of Aleppo.

Liwa Al-Quds continued its military operations supporting the Tiger Forces and the Syrian Arab Army in securing the eastern countryside of Aleppo. Liwa Al-Quds fighters played an active role in protecting the northern chunk of the Khanasser Highway, the only government supply route to the city.

In July-August 2016, the force was actively involved in operations in western Aleppo, especially in Ramoseh, Rashideen and Zahra’ areas. After Jabhat al-Nusra and its allied militant groups captured the Ramouseh Artillery Base complex and opened a new supply line to the militant-held part of Aleppo, members of Liwa al-Quds and the Tiger Forces broke militant defenses in the area and re-imposed the encirclement.

Liwa al-Quds took part in the further government advance inside Aleppo and this strategic city was fully liberated from militant groups in December 2016. This was one of the biggest victories of the Syrian government in the ongoing war.

During the Aleppo operation, Liwa al-Quds brigade as well as other pro-government factions was closely cooperating with the Russian military, including Russian military advisers deployed to the area.

In November 27, Mohammad Rafi was killed during the Liwa al-Quds operation in northeastern Aleppo. He was leading Liwa al-Quds fighters advancing in the direction of the Bayaddin district.

Liwa Al-Quds is one of the largest and most powerful pro-government auxiliary force operating in Aleppo. Its fighters are known for their vast experience in urban warfare. Their armament is pretty light as the brigade only owns a small number of T-55 tanks and BMP-1 armored vehicles which were granted to it by the Palestinian Liberation Army. The brigade’s ammunition is supplied by the Russian, Syrian, and Iranian militaries.

Liwa al-Quds will likely be an integral part of the widely expected government operation aimed at liberating of the southwestern Aleppo countryside. In this area, government forces have two main options:

However, this operation has been delayed because while the Syrian government is solving problems that are now more important: liberating pockets near Damascus and dealing with Jabhat al-Nusra and its allies in northern Hama.