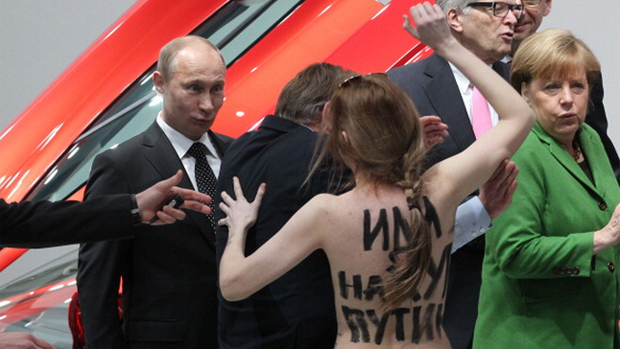 [ Editor’s Note: My, my… this came as a big surprise, a multi-billion euro jump in trade, in just the first two months of the year, a bit of a hint that some of the sanctions have a play-acting feature to them.

The Germans have been holding to their standard line that Crimea was seized by Russia, hence the sanctions cannot be removed, while behind the scenes, trade deals have found routes around the sanctions roadblocks.

This breathes life into the old adage of “where there’s a will, there’s a way”. Long forgotten by most now is that prior to the sanctions the EU had a 120-billion Euro trade surplus with Russia. It was sustainable because that was about the total of Russia’s energy sales, so it was not a big balance of payments problem for them.

It was a wonderful deal of the EU, really for both; so Russia had an obvious strategic long-term interest in maintaining good economic relations. The idea that somehow Putin had some secret master plan to retake the old Soviet States and threaten Western Europe is preposterous on its face.

It has amazed me how the warmongering spinmeisters have pitched Russia as a “given threat”, meaning one that is self-evident that it needs no confirmation. That of course is an old hustler’s con, but a huge segment of the public has just lapped it up, including more than a few Congressional Democrats.

This is the sad state we find ourselves in – an advanced state of “managed perceptions” where our political and bankster class has us over a barrel. The realities that debunk their Russian threat hype as a scam are not a big problem for them, as they are able, as long as they have the money and the right tools, to create whatever perception of reality they need to win a 50% vote.

This is one of the biggest national security risks that we face, and one for which there is no organized resistance from the general public or our mass of civic institutions, which are as compromised mentally as the citizens themselves. It is a pitiful state of affairs… Jim W. Dean ]

Trade between Russia and Germany saw a multi-billion euro surge in January and February, German newspaper Die Zeit reports. With the Russian economy recovering from the recession, German businesses are bullish on trade.

The newspaper quotes both Russian and German statistics offices, and both are seeing robust growth in trade between the countries.

The Moscow-based German-Russian Foreign Trade Chamber announced a 43 percent rise to €6.7 billion in the first two months of the year. The German Federal Statistical Office posted a 37.3 percent growth to €9.5 billion in the same period.

According to a survey conducted by the chamber, 63 percent of German companies actively working in Russia expect sales to rise this year.

Trade between Russia and Germany took a hit after the European Union and the United States imposed sanctions against Russia in March 2014 over Crimea reunification and the war in eastern Ukraine. German companies feared that due to the sanctions, they could permanently lose market share to competition, particularly China.

Since 2012, German exports to Russia have almost halved from €38 billion to around €21.5 billion last year.

German politicians, including the former Minister of Economic Affairs, Sigmar Gabriel, have also called for a gradual end to the sanctions.

In April, German energy giant Wintershall called for the cancellation of anti-Russian sanctions. According to the CEO Mario Mehren, the punitive measures injured both the Russian economy and trade between Russia and Europe, but no steps have been made toward solving the political crisis.