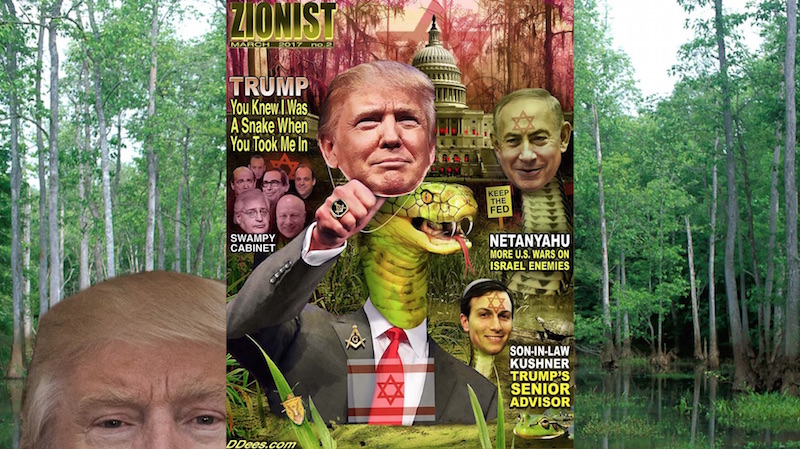 On its way to vote one Tuesday

Down the path along side the lake

“Oh well,” the nation cried, “I’ll take you in and vote for you”

“Vote me in oh tender nation

The nation took that snake into its beautiful White House

And watched it curl up beside a book by Leo Strauss

And though he couldn’t read, he got the message pretty quick

And with sharpened fangs prepared to prove himself a toxic prick

The nation clutched him to her bosom, “You’re so beautiful,” she cried

“If Hillary had won, by now I’m sure we’d all have died”

But instead of saying thanks, that snake gave her a vicious bite

“I elected you,” cried that nation

“Oh shut up, silly nation,” said the reptile with a grin

Why does Trump keep repeating the lyrics to that Al Wilson song about the ungrateful snake? You don’t have to be Sigmund Freud to suspect that something weird and powerfully unpleasant is going on in the deep dark depths of the President’s unconscious mind.

But there is a serious problem with that interpretation. Watch closely – if you can stand it – as Trump reads the poem.

Trump obviously relishes the poem. In fact, he relishes it too much. It turns him on.  Ponder the implications of that.

At a deep, unconscious level, it’s obvious that Trump identifies with the snake.  Not the woman. The snake!

The snake, Uncle Sigmund used to say as he chomped on a cigar, is the ultimate phallic symbol. That’s why, in the Garden of Eden, when the snake reared his ugly head, the primordial couple had to cover it up with fig leaves.

Al Wilson’s song is about a male psychopath who seduces and betrays a woman. Confronted, the psychopath excuses himself by saying “you knew I was a bad boy when you let me seduce you, so what did you expect?”

We knew all about Trump before we took him in.

We knew Trump (in all likelihood) hired prostitutes to piss all over a bed Obama had slept in.

We knew Trump is a serial sexual assault perpetrator, according to a long list of women (and they’re just the ones with the guts to go public.)

We knew Trump was a client of Jeffrey Epstein, the Mossad’s pedophile pimp, and (according to a lawsuit) raped a 13-year-old.

“I’ve known Jeff for 15 years. Terrific guy,’’ Trump told New York Magazine back in 2002. “He’s a lot of fun to be with. It is even said that he likes beautiful women as much as I do, and many of them are on the younger side. No doubt about it — Jeffrey enjoys his social life.”

We knew Trump has been a mob frontman ever since he was “made” by Roy Cohn.

We knew Trump bought beauty contests so he could do things like barging into Miss Teen USA’s dressing room and then boast about it.

I could go on like this all night. But I shouldn’t have to tell you what you already knew before you took Trump in. Just looking at his demeanor for a couple of seconds should be enough to reveal to anyone with eyes that the current President of the United States is a flim-flam man – an egotistical narcissistic scumbag and borderline psychopath who specializes in “taking in” an ever-growing number of victims.