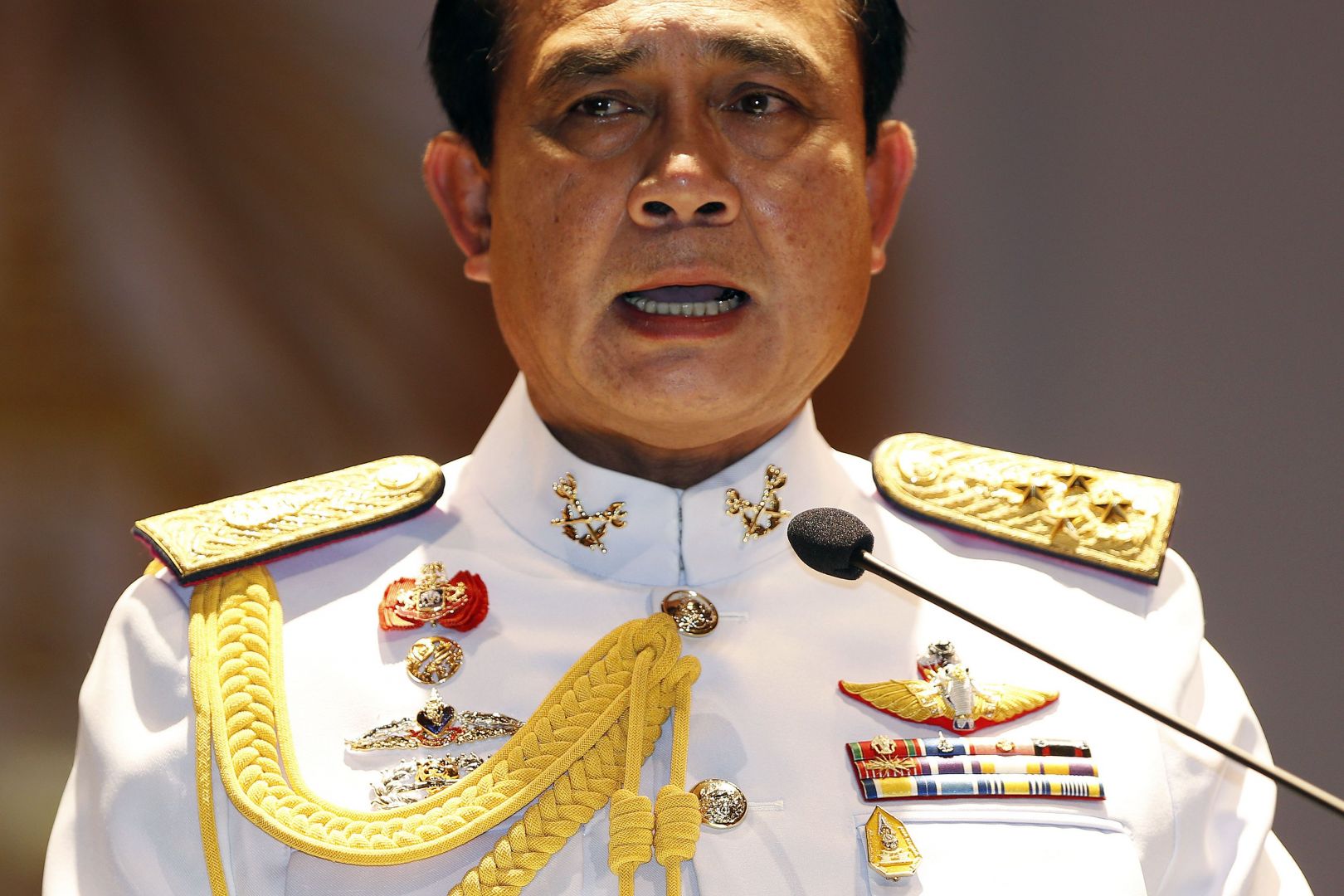 [ Editor’s Note: We are beginning to not only see more of alternative media challenge the Fake Media giants, but seeing it done in a professional way, via something that used to be known as “investigative journalism”.

That was before the big consolidated media houses considered that vein of reporting “old school” and a threat to their consistent efforts to “manage public perceptions” via what and how they reported stories.

Joseph Thomas has picked a plump target with how media can spin “who is an autocrat” to please a constituency they are serving, either inside their ownership structure, or to curry favor with outside powers like governments and big business powers.

As Thomas points out below, Thailand does not have a reputation of being run by Boy Scouts. The same could be said for most of Asia, and the world for that matter. But he rakes the AFP for its attempts at branding the current Thai PM as America’s new autocrat friend, knowing the vast majority of the public is not aware of the autocrat he replaced, who had tight relations with the US and West because he was their guy.

VT has been able to bring our readers this level of reporting in Asia due to our partnership with New Eastern Outlook in Moscow, where we have access to their deep bench of writing talent. For an editor like myself, going to the NEO site to look for good material to bring over is like a visit to an organic writers’ farmers market, where one gets to pick from among the best available.

Gordon and I did a first radio interview with a South African station this morning, partly due to not only our Syria coverage, but the breadth and depth of the material they found at VT, which included our NEO material. Good work finds a good audience, and we will keep building in this direction… Jim W. Dean ] 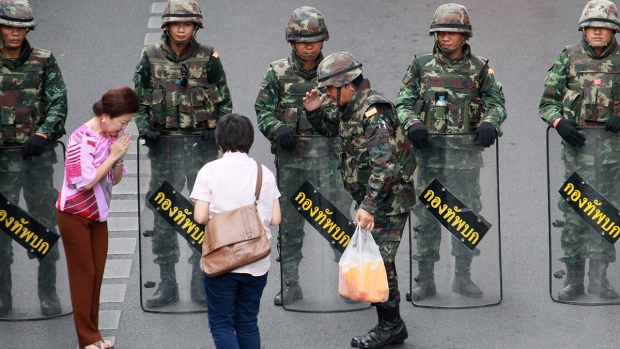 Mounting evidence suggests media outlets across the United States and Europe are selectively labeling leaders from around the world as “autocrats,” “despots” and “dictators” based not on their actual human rights records, policies or actions, but rather on where they fall along the spectrum of obedience to and complicity with the ambitions of Wall Street, Washington, London and Brussels.

No clearer example of this can be seen than the media’s treatment of current Thai prime minister, Prayut Chan-O-Cha. In an AFP article titled, “Thai junta chief accepts Trump invite,” the media service claims:

Thailand’s junta chief has accepted an invitation to visit the White House from President Donald Trump, his spokesman said Monday, the latest autocrat to be embraced by the US leader.

In an attempt to justify AFP’s claims of the Thai prime minister being an “autocrat,” AFP states:

Thailand’s former army chief Prayut Chan-O-Cha seized power three years ago, anointing himself prime minister and ushering in the kingdom’s most autocratic government in a generation.  The coup strained ties with the Barack Obama administration as the military jailed dissidents, banned protests and ramped up prosecutions under the kingdom’s draconian lese majeste law.

In reality, AFP is intentionally misleading readers while grossly mischaracterising the current state of politics in Thailand. AFP is also contributing to a much larger deception regarding the principles the United States allegedly stands for and US foreign policy in actual practice. 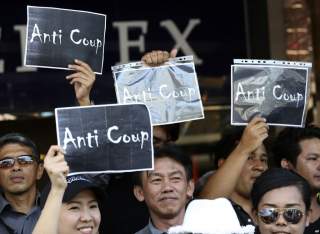 The 2014 coup after which Prime Minister Prayut assumed power, ousted a regime which up to the very eve of the coup was mass murdering protesters in the streets.

Protests spanning 2013-2014 were aimed at removing Prime Minister Yingluck Shinawatra from power for a series of abuses, corruption and the fact that she served openly as a proxy for her brother, Thaksin Shinwatra, ousted from power earlier, convicted of corruption and currently residing abroad as a fugitive.

During the protests, the Shinawatra regime organised cadres of heavily armed militants who used assault rifles, grenades, grenade launchers and other weapons to attack demonstrators, at some points during the crisis, on a nightly basis. Up to 20 would die and many more left injured or maimed.

Thaksin Shinawatra, who served as Thai prime minister from 2001 to 2006, stands guilty of serial abuses of human rights including a 2003 “war on drugs” that left approximately 3,000 innocent people extrajudicially executed in the streets over a 90 day period. Human Rights Watch would, at the time, catalogued Shinwatra’s bout of mass murder in two reports, “Thailand’s ‘war on drugs’,” and “Not Enough Graves.”

Under Shinawatra’s administration, his political enemies were systematically targeted with both intimidation and assassination. Media critical of his policies and actions were also systematically targeted with both legal and physical intimidation. The New York Times in a 2005 article titled, “Thaksin accused of ‘dirty war’ on media,” would report:

Prime Minister Thaksin has an agenda all his own. Although he is the founder of a telecommunications empire and keen to project Thailand as a fast-modernizing part of the global economy, Thaksin has little tolerance of the criticism aired in a free press. His concentrated political power and the considerable resources of his family’s commercial empire have been combined to muzzle critics in both the broadcast and print media. 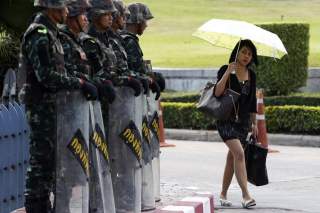 Worse than mere “muzzling,” Shinwatra’s administration also presided over the systematic assassination or attempted assassination of critics. According to Amnesty International, 18 human rights defenders were either assassinated or disappeared during his first term in office.

And AFP not only failed to mention Shinwatra’s time in office, or the abuse and violence carried out under his sister’s regime leading up to the 2014 coup, AFP also failed to mention two failed, incredibly violent bids by Shinawatra to seize back power via street protests organised by him and his supporters in 2009 and 2010 respectively.

The former of the two attempts saw nearly 100 killed as armed militants mingled with protesters and fought gun battles against government troops and carried out large scale arson within Thailand’s capital of Bangkok.

As to why Shinawatra’s serial crimes against humanity have been glossed over by media organisations like AFP, it is a simple matter of Shinawatra being a willing collaborator with US and European interests, while the current Thai government has leaned more toward its neighbours in Asia for closer ties.
AFP’s article would even admit as much, referring to Thailand as a “former staunch US ally that has moved closer to Beijing since the coup.”

It’s clear then that the current Thai government’s status as “autocratic” stems not from actual metrics of freedom, peace and stability being enjoyed or repressed in Thailand, but from the ability (or now, inability) of the United States to influence Thailand’s internal political affairs and policies. Many of those reportedly “repressed” by the Thai government are in fact US-funded and directed agitators engaged in political, economic and even armed subversion.

The AFP, through its reporting, exposes itself as yet another outlet engaged in lobbying, not journalism, despite the carefully constructed reputation it uses to carry that lobbying out behind a smoke screen. 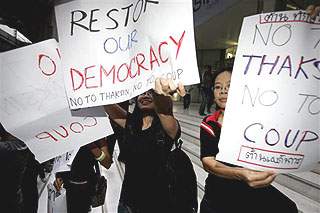 The media meme of “Trump embracing autocrats” exists in an alternate reality. In this reality, regardless of who occupies the White House, the US has backed some of the worst dictatorships in modern history.

This includes Saudi Arabia which has enjoyed US support for decades and who participated in the largest arms deal in American history, not under Trump, but under Nobel Peace Prize laureate, Barrack Obama.

Closer to Asia, Myanmar’s Aung San Suu Kyi quite literally contrived an entire office to place herself in power in order to circumvent the nation’s constitution banning  political candidates who themselves or their children hold duel citizenship. And since taking power, Suu Kyi and her political party have doubled down on a violent campaign of ethno-terror waged against the nation’s Rohingya minority.

Suu Kyi’s ability to sidestep US and European condemnation stems from her long-term commitment to the interests of Wall Street, Washington, London and Brussels ahead of those of Myanmar itself. When Suu Kyi appears to be cosying up to Beijing, US and European fronts posing as rights advocates “gently” remind the world of her and her support base’s aversion to the “Rohingya” people.

Regarding Trump’s invitation to Thailand’s prime minister, it should be noted that meetings alone are meaningless. Obama had met with Libyan leader Muammar Gaddafi several times and apparent cooperation between Libya and the United States was underway before a US-led war was launched against the North African nation and both Gaddafi and virtually all immediate members of his family were targeted for arrest or assassination. 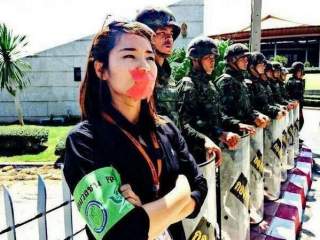 Ultimately, the AFP story is just one of many constituting genuinely “fake news,” entirely contrived by political motivation, and utterly divorced from journalistic integrity.

Thailand’s current government remains far from ideal with much room for improvement, but to characterise it as an “autocracy” while states like Myanmar and Saudi Arabia are given free passes, along with the previous, brutal regime that was ousted in Thailand before the current government took power, is intentionally dishonest.

AFP’s story is part of a systematic process of distorting reality in order to place public pressure on governments targeted for regime change.

Thailand is currently one of those governments being targeted, and just as US and European media lied ahead of regime change elsewhere, the mischaracterisation of Thailand’s political crisis indicates increased tensions, not rapprochement, lie ahead between Washington and Bangkok.