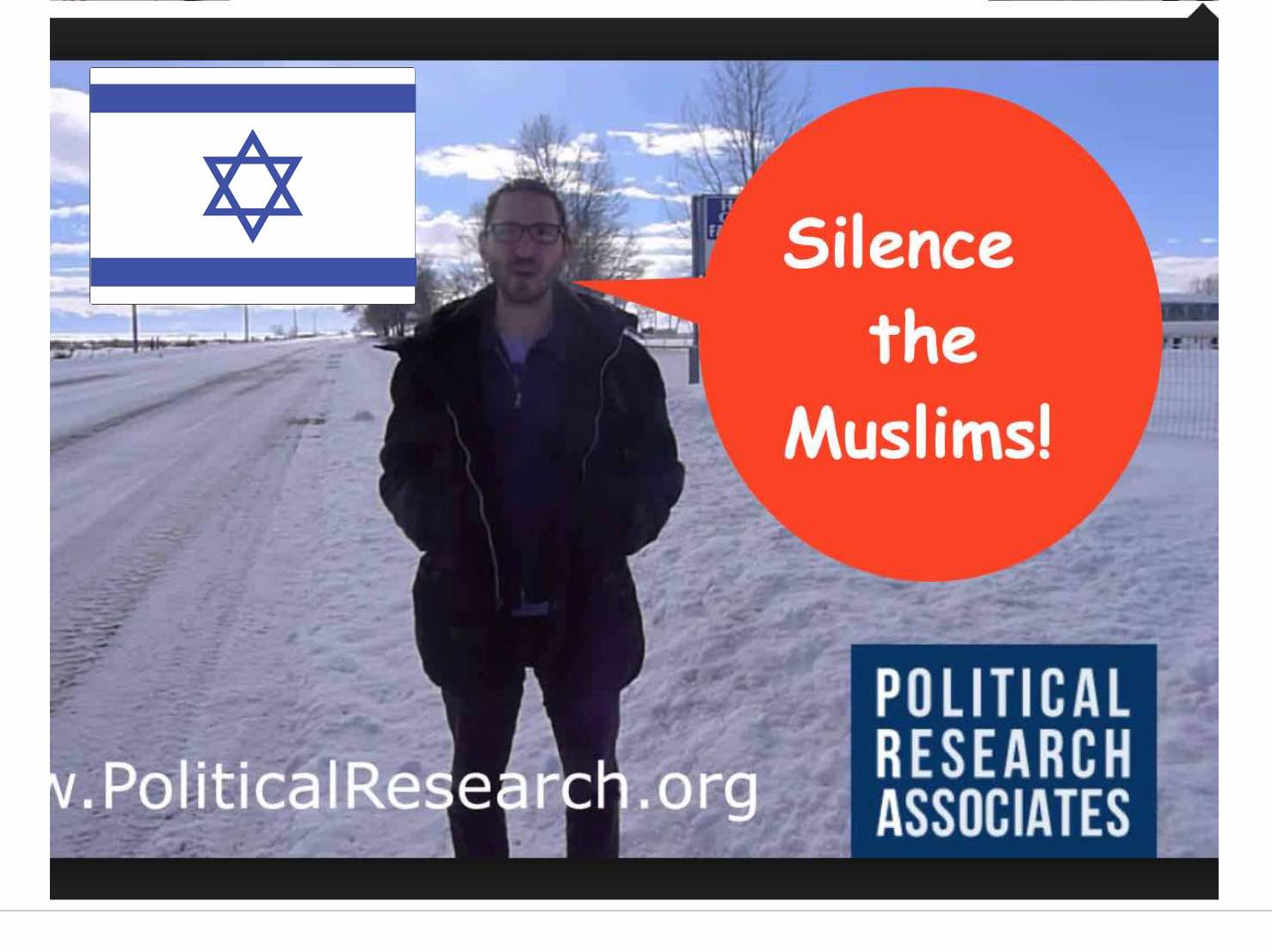 Pressured by Zionists, the Left Forum – America’s biggest gathering of leftists scheduled for June 2nd-4th in New York City – has canceled three events focusing on 9/11 truth and false flag terrorism. This act of censorship sends a clear message: Muslims, who have been mass-murdered by the millions in the pre-planned anti-Islam holocaust unleashed by the 9/11 operation and its follow-up false flags, must be prevented from conveying their analysis to the thousands of people at the Forum.

Full titles of the banned events:

Polls show that the vast majority of the world’s Muslims believes that 9/11 was a false flag operation and the “war on terror” is a disguised war on Islam. Even the most liberal, pro-Western, anti-fundamentalist Muslim leaders like Khaled Abou El Fadl, America’s leading academic expert on Islamic legal traditions, now say that the official story of 9/11 is obviously bogus —and  that 9/11 triggered a disguised war on Islam.

Listen to Prof. Khaled Abou El Fadl apologize for his years of acquiescing to the official myth of 9/11

Leftists are normally sympathetic to persecuted groups, and want to “give them a voice.” So why is the Left Forum silencing Muslims?

The Left Forum canceled the proposed panels under pressure from the notorious Zionist thought police group Political Research Associates. PRI attack dog Spencer Sunshine sent the Left Forum Board a long, libelous letter accusing me and others of various thoughtcrimes.

Read the full text of Spenser Sunshine’s letter demanding that 9/11 truth, anti-Zionism and the Muslim-majority viewpoint on these and other issues be suppressed from the Left Forum

Sunshine’s letter singled out yours truly, the only Muslim participant in the panels. The letter begins:

I am writing to you, on behalf of a group of NYC activists, to express our objection to a number of antisemitic conspiracy theorists and Holocaust deniers who appeared on the “Deep State” track” last year. The most well-known of these speakers, Kevin Barrett, bragged on the Far Right website Veterans Today that they had tricked the Left Forum into hosting their speakers…

A Left Forum Board source who was present at the Board meeting that canceled the panels stated to a journalist:

I understand they found Kevin Barrett screeds anti Semitic but to punish a whole panel & topic because of one person is very reactionary oppressive and authoritarian and counter to their educational mission.

The expression “anti-Semitic” is a Zionist dog-whistle for “a Muslim who articulately states the Muslim-majority viewpoint on the ‘war on terror,’ thereby posing a threat to Zionism.”

Zionists – whether hard-line “right-wing” extremists like Bibi Netanyahu or squishy “leftists” like Spenser Sunshine – know that Palestine has been Muslim-administered holy land virtually ever since Islam existed, and that the genocidal Zionist invasion, occupation, and ethnic cleansing of Palestine is an existential war on Islam (as well as an offense to Christianity and Palestinian Christians). As aggressors and genocide perpetrators, the Zionists depend on their control of Western media, both mainstream and “alternative,” to suppress the viewpoint of their victims. And they depend on their control over institutions like the Left Forum to prevent the victims’ viewpoint from being heard by the very people who are most sympathetic to the plight of persecuted and oppressed people – namely leftists.

“Visas for al-Qaeda” whistleblower J. Michael Springmann – hardly a supporter of political Islam – expressed his outrage at the Left Forum’s act of censorship in a letter mailed to the Left Forum board last week:

I am alternately appalled, outraged, and infuriated at your support for the wild, irrational, and unsubstantiated charges Spencer Sunshine filed with your organization . Sunshine is a tin-hat wearing conspiracy theorist. He is also a Zionist dedicated to the overthrow of the 1st Amendment.

Your website states:  The Left Forum brings together national and international politics, people, ideas, and activism for a just, equitable, free, sustainable world beyond capitalism.  If that is true, you appear to have three choices:  (1.) immediately re-instate the banned panels; (2) resign; (3.) deal with the consequences. You and Spencer Sunshine are bullies. And, as the Palestinian activist Maria LaHood said, “…[T]he tactic of a bully is to silence, malign, or intimidate the speaker.”

Frankly, you and Spencer Sunshine give Jews a bad name.

Personally, I had not known that Spencer Sunshine was Jewish until he told me so when I called him up a couple of weeks ago to ask why he was trying to prevent me from speaking at the Left Forum. (All I knew is that he is associated with PRI, formerly headed by Chip Berlet, leader of efforts to prevent the left from learning the truth about the Kennedy assassinations, 9/11, and other Deep State events.) Listen to Sunshine’s hostile, paranoid reaction to my inquiry:

Please contact the Left Forum Board Members below. Ask them to reinstate the panels they have censored. Tell them that the Left Forum needs to hear what Muslims really think about 9/11 and the “War on Terror.”

is Distinguished Professor of Sociology at CUNY Graduate Center, where he is Director of The Center for the Study of Culture, Technology and Work. He has taught at Staten Island Community College, University of California-Irvine, University of Paris, Columbia University, and University of Wisconsin. After working in metalworking factories in New York and New Jersey, Aronowitz became a union organizer for the Oil, Chemical and Atomic Workers’ Union. He is Founding Editor of Social Text and Situations, was Book Review Editor of Social Policy, and serves on the Editorial Board of Ethnography; Cultural Critique. He has authored and edited 23 books, including False Promises (1973), Science as Power (1988), Roll Over Beethoven (1993), How Class Works (2003), Just Around the Corner: The Paradox of the Jobless Recovery (2005) and Left Turn: Forging a New Political Future (2006). He edited and wrote the introduction for a 4-volume critical reception of C.Wright Mills (2004), and is currently writing a biography of Mills.

​is the Director of Digital and Social Media for Democracy at Work, a non-profit organization in New York City that develops and disseminates resources to generate, inform, advise, and sustain democratically organized enterprises.  Maria obtained her Masters Degree in Management from The College of St. Elizabeth in New Jersey.  She has over 15 years of leadership experience working in Higher Education.  Maria has been attending the Left Forum for 20 years.  Her passion and enthusiasm for Leftism began in adolescence and continues to this day.  She currently lives in Woodland Park, NJ with her husband and two children..

is a long time Brooklyn-based organizer. A board member since January 2017, Samantha is the elected volunteer representative on the Left Forum board of directors. Samantha obtained her Masters Degree in Political Science with a concentration in Urban Policy and Public Administration from Brooklyn College. She is a passionate advocate and organizer and much of her community work has focused on issues affecting youth and children; as a mentor and educator, she has been an advocate of educational opportunity for over 15 years. Since 2010, she has helped to coordinate multiple local Haitian relief efforts, as well as, served as a volunteer with the National Coalition of Concerned Legal Professionals. Though new to the board, Samantha has been a core left forum organizer for years. Having led efforts and initiatives in registration and volunteer coordination since 2013, she has been instrumental in the implementation of the recent artistic and operational developments of the LF conference

is Associate Professor and Chair of the Sociology Department at College of Mount Saint Vincent in the Bronx. Her first book, The American Surfer: Radical Culture and Capitalism, was published by Routledge in 2011 and examined the politics of American surf culture during the twentieth century. She is a member of the editorial collective of the journal Situations: Project of the Radical Imagination; her work has been published there as well as in several edited collections, Z Magazine, and the digital forum of the Social Science Research Council. Dr. Lawler received her Ph.D. from the CUNY Graduate Center and worked as a staff organizer for the PSC, the CUNY faculty union. She lives in Brooklyn with her husband and two children. She is currently at work on her new book, Sabotage: A Political History.

is a Special Adviser to the Campaign to Restore National Housing Rights. He is  co-founder of the Take Back the Land National Movement and a member of the US Human Rights Network.  Rob spent two and a half years, homeless in Miami and ten months in a New York City homeless shelter. He eventually escaped his cycle of homelessness and has been in the housing movement in New York City since 2007. In the fall of 2009, Rob was chosen to be chairperson for the first ever official visit of a UN Special Rapporteur on the Right to Adequate Housing. Rob has worked with homeless populations in Budapest Hungary and Berlin Germany. He is connected with housing movements in South Africa and Brazil. He is a member of a social justice media collective which produces and airs a monthly radio show over WBAI in New York City called Global Movements Urban Struggles.​​

is Professor of Economics Emeritus at the University of Massachusetts, Amherst. He is currently a Visiting Professor in the Graduate Program in International Affairs of the New School University in New York. Wolff has also taught economics at Yale University, the City University of New York, and the University of Paris I (Sorbonne). In 2010 he co-founded Democracy at Work and since 2011, he has hosted the weekly radio and TV program, “Economic Update,” now syndicated on 75 stations across the US and beyond. His publications, current research, and teaching concentrate on analyzing the global capitalist crisis. His most recent book (2016) isCapitalism’s Crisis Deepens. In 2009, he produced a documentary film entitled Capitalism Hits the Fan and a book entitled Capitalism Hits the Fan: The Global Economic Meltdown and What to Do About It. Together with his frequent co-author, the late Stephen Resnick, he also published New Departures in Marxian Theory (2006) and Class Theory and History: Capitalism and Communism in the USSR (2002). Wolff’s work can be seen at rdwolff.com and democracyatwork.info.