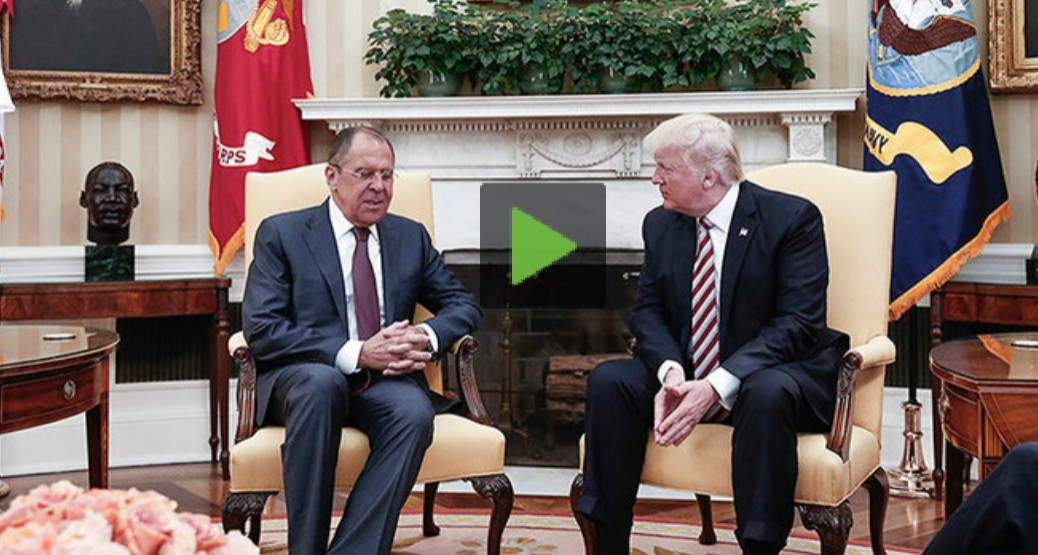 Editor’s note:  With its usual ham-handedness, RT steps up for Trump who has stabbed Russia in the back time and time again, this time defending the indefensible.  This is their version of a massive constitutional crisis in the US with the executive branch, aided by “Light loafered Lindsay Graham” doing Trump’s dirty work.

For those of you unaware, RT is “infiltrated” and “controlled” and should be telling the public that Mike Flynn worked for Turkey (Israel) and was involved in laundering cash for ISIS.  Instead, they give us this crap.g

In response to US media hysteria over Russian outlets obtaining photos of Donald Trump’s closed-door meeting with Russian FM Sergey Lavrov, the White House says both a Russian and an American photojournalist were present.

What made the photo shoot even more intriguing was the attendance of Russia’s ambassador to the United States, Sergey Kislyak – a key figure in the investigation of the Trump administration’s ties to Russia.

After the pictures taken by a TASS correspondent became public, American journalists were quick to look for conspiracy theories.

These photos of Trump-Russia meetings are courtesy solely of Russian MFA because no US press allowed in. pic.twitter.com/PI4cSPIqvG

Observation: The world is getting almost all of its news about the US president today from the Russian gov’t and Russian state media.

Russia takes happy fun time pictures in White House & celebrates their victory in US election – US media not invited in their own country pic.twitter.com/cuYttK8xRS

“The Russians had it all out globally while the White House press corps was kept out,” Mitchell said. “It’s unprecedented.”

White House does not — and doesn’t let US media in.@mitchellreports reports now. pic.twitter.com/GoD2VxbzZf

It appears Russian state media agency TASS was allowed into the Trump-Lavrov meeting for photos.

US media were not allowed inside.

Other journalists voiced their concern on Twitter, saying that they suddenly became reliant on Russian news outlets for pictures from the American president’s meeting.

Photos of Trump’s meeting with Lavrov and Kislyak just hit the Getty wire and they’re all credited to Russian news agency TASS pic.twitter.com/qE9lWB6KuS

To be clear: Russian media allowed in The White House. American media not. https://t.co/f4CqSQ2XjF

The Washington Post cited US intelligence and White House officials who hinted that TASS’ visit to the office was a potential security breach. The officials feared that the TASS correspondent could have planted a spying device in the presidential office.

The photos of the clandestine Lavrov-Trump-Kislyak meeting were taken by TASS photographer Alexander Shcherbak. The photos were then distributed by the Associated Press, which credits the Russian Foreign Ministry as the source, and then Getty Images, which credits TASS.

In light of WH press exclusion from this meeting, this feels like a not-to-subtle ribbing https://t.co/JKrvfO4Cml

US media was blocked from Trump/Lavrov Oval Office meeting. But you can see pictures on the Russian FM’s Flickr… https://t.co/TqiJ8GGtsA

As speculation over the TASS images gathered momentum, the White House responded, saying one Russian and one American photographer captured the historic encounter.

Meanwhile, a senior administration official dismissed fears that TASS planted a bug in the Oval office.

The Russian news agency “had to go through the same screening as a member of the US press going through the main gate to the [White House] briefing room,” the official told the Washington Post.

Another official also dismissed any speculation that Ambassador Kislyak was there to recruit Trump.

“It is standard practice for ambassadors to accompany their principals, and it is ridiculous to suggest there was anything improper,” the administration official told the Washington Post, adding that the White House rooms “are swept routinely” for listening devices.