Watch the new FFWN above; click HERE for links to the stories,  HERE to subscribe to my work, and HERE to support False Flag Weekly News.

False Flag Weekly News co-host Anthony Hall is flying to Tehran to attend a conference and get a first-hand view of the Iranian elections scheduled for next Friday, May 19.

In the meantime, here is insider Barry Lanza’s behind-the-scenes view of what is at stake in the Iranian election.

My full one-hour interview with Barry Lanza will soon be available HERE.

In the above extract, Barry discusses his insider knowledge of a US-based plot, apparently run through the CIA, to overthrow the Islamic Republic in a 1988 coup attempt. Barry refused to join the plot. He also had insider knowledge about details of the December 1988 bombing of Pan Am 103 over Lockerbie, which (he says) was linked to the Iran coup attempt. (Libya had nothing to do with it.)  Barry says he was threatened, and had to flee the US and seek political asylum in Spain.

Iranian President Rouhani, who is up for re-election next Friday, is a protégé of the late Iranian billionaire and political godfather Akbar Hashemi Rafsanjani. At least part of the Rafsanjani crowd, Barry suggests, forms a sort of Iranian “Deep State” with links to the former Shah’s people, Western intelligence services, the Rothschilds, freemasonry – in short, the usual  New World Order suspects … the kind of people Barry has spent much of his life rubbing shoulders with.

No wonder the MSM is cheering for the “reformists.”

Some of these people are Barry’s in-laws. He writes:

“My wife’s family Hessabi(y) was part of the old Qajar Dynasty. Many served in the Shah’s regime and quietly worked for the Jewish groups. One Hessaby created the University of Tehran under Mossedegh. My wife’s relative helped to create the National Iran Oil Company in London.  My wife’s family now runs a foundation in Iran based on nuclear work as a front. They seem to have a relationship with the Rothschild family.”

“Dr. Mehdi Hessabi – father-in-law -was convicted head of British spies in Iran, given amnesty four years later. Before that, he was a colonial governor under the British and the Shah. He was a freemason in the city of London, France, Scotland, the US state of Michigan, Iran, and the Iranian exile masonic lodge in California. He moved to Paris in December 1977 to install the new regime and to install Fardoust as the new head of the new SAVAK with the Pakravans who were credited with saving Khomeini’s life in 1964 (see Wikipedia General Pakravan).” 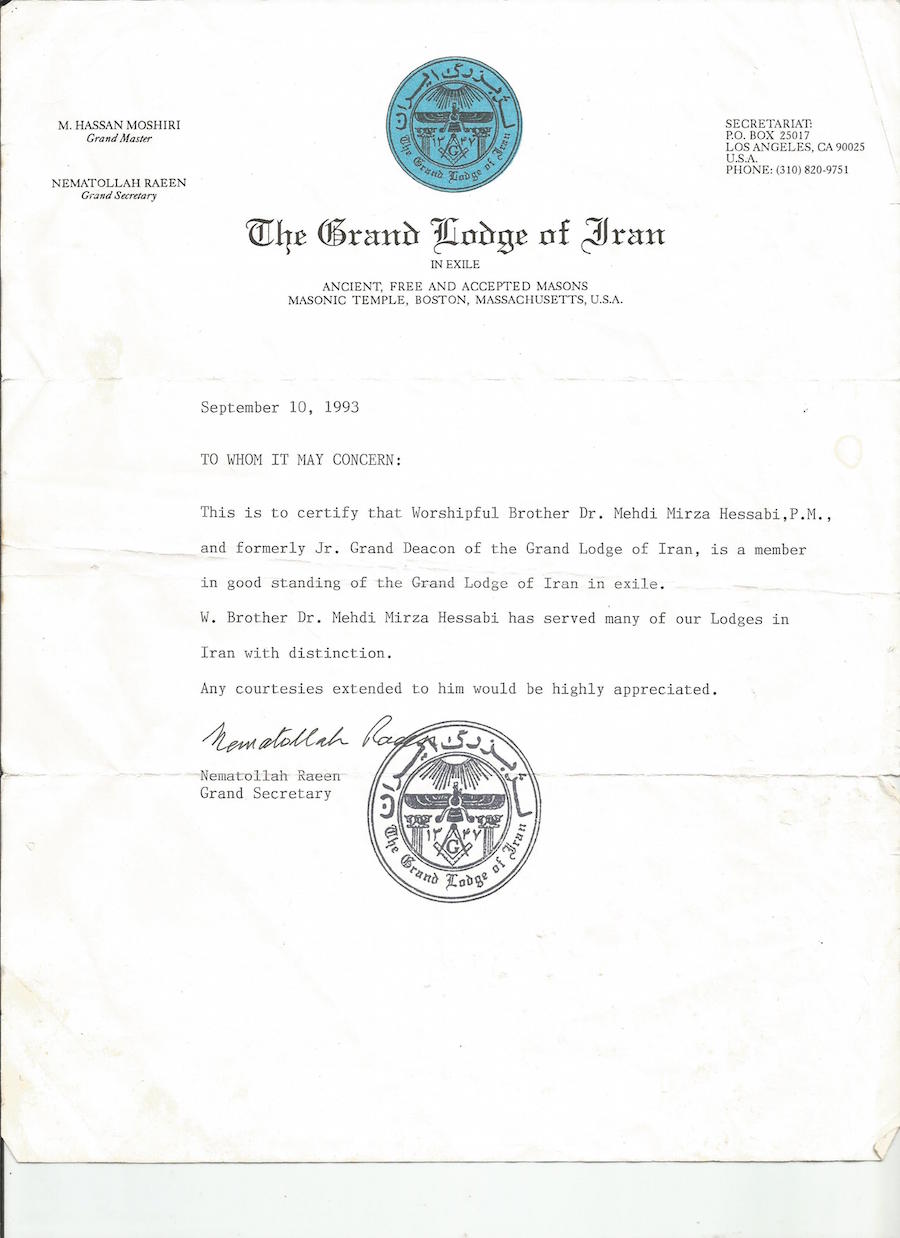 So who is Barry Lanza?

Sonny Lanza – first cousin removed – big in AID education in various hotspots including Afghanistan where he said the US created the Taliban out of four tribes held together by bribes. He brought Taliban family members to the US for education, mostly to DC and Nebraska. Talked often and he has top secret clearance.

Here is Barry’s piece on the upcoming Iranian elections.

Is President Rouhani to be the new Rafsanjani, or the new colonial governor under the British?

Rafsanjani, the new unofficial Shah (he was openly called the ‘Akbar Shah’)  died in January 2017. He was unknown until he began constantly attaching himself to Ayatollah Khomeini in Paris in early 1979.

My father-in-law went to Paris to help get his friend’s man Fardoust installed as the new head of the NEW SAVAK under Khomeini. Fardoust worked with the Pakravans who used to run the brutal old SAVAK. He was successful putting in the new SAVAK but it all turned bad. General Pakravan, who arranged Khomeini’s exile in 1964, was executed. Fardoust’s new ‘SAVAK’ organization was discredited and shut down and my father-in-law was under a death sentence until 1984 as “Head of the British spies” before finally being given amnesty. The revolution in name only did not work; the networks still operated.

My father-in-law’s main job when he was colonial governor in the 1940s was to bribe the Mullahs while BP took all the oil it could take.

Rafsanjani was always called ‘Moderate’ by the West but was always trying to prove the opposite with his critics. He originally made the Iran-Contra arms deal to get in bed with the West. Nir, the Israeli agent, set up the deal for the arm sales which the US piggybacked on, and which blew up in his face. He had already arrested the leader of the ‘Party of God’ and ended up releasing him. Some of his family went to school in the U.S. The radicals did not trust him.

Rafsanjani in the late 1980’s was responsible for crushing resistance (outside of the Shah’s son’s people who were protected by the oil companies). The oil companies always allow an opposition that will honor the current oil contracts. The Iranian government allows it in case their government falls apart and they need exile with their outside assets.

The US escorted the Kuwaiti oil convoy in July 1987 to provoke Iran to attack so the US could take them out. The Mullahs got the people into the streets and the US backed off. At that point, Iran wanted the Shah’s assets returned and any talks with the US included that topic. Many in the Iranian government had a foot in both camps which became a sore point.

In 1988, the Shah’s son pretended he was poor, claiming he lost his money in the 1987 stock crash. In December 1988, the Pan Am bombing in Scotland basically destroyed the largest physical asset of the Shah’s family, Pan Am. The Defense Intelligence agency said Iran did it, the wife of the bomb timer was Iranian and the fact the insurance company gave a massive sum to the Shah’s family for the bombing could only lead to one conclusion. Libya must have done it. None of this information was allowed in the Lockerbie Libya trial. The Libyans wanted the sanctions off and to get off the terrorist list. They fell on the sword to clean their ‘terrorism’ record.

Why did the English need the mullahs? Shell and BP helped to create the National Iranian Oil Company in 1953 to arrange payments to the British National Health Insurance from the profits. Mahmood Hessaby officially set up the company. He was my wife’s cousin and they brought SHELL, a Rothschild’s oil company into Iran in 1953. Under Rafsanjani, Shell became the number one oil company in Iran.

In May 1990, a deal was stuck by Rafsanjani’s people and the Bush Administration. Lockerbie never ‘happened’ with Iran, the Shah’s assets in Iran would be restored quietly, the Shah’s people and the US will never try to install the Shah again through violence, coups, etc, the US would never block any IMF and World Bank loans to Iran. Mobil oil would repay past due money to Iran in November 1990 and would resume operation between Christmas and New Year in November 1990. Mobil oil would never be subject to any US sanctions.

The U.S. would never take out the Iranian government…unless it would all fall apart. Such a prospect was raised by the Israelis’ coup at the “Hello’ newspaper in February 1997 and the Rafsanjani push for a “moderate Islamic state” in 2009. (Rafsanjani owned many of the universities and could get people to the streets.) The US did nothing. The uprising stopped when Rafsanjani’s daughter was arrested.

In September 2001, the 9/11 terrorist act happened. I could prove the Hessaby’s knew the exact day.

(Editor’s note: In my full interview with Barry Lanza, forthcoming from Truth Jihad Radio, Barry discusses how he obtained foreknowledge of 9/11, tried to warn the US government, and endured official harassment as a result.)

The people of Iran almost showed an outpouring of love for the U.S. after 9/11 and everyone was shocked. On December 14, 2001, Rafsanjaniraised the prospect of Iran dropping a nuclear bomb on Israel. Only Iran and Israel reported it and the sanctions returned in force to stir up hate for the US as the economy was hurt.

I was in Iran in 2013 and saw the debates in the Presidential Elections. Towards the end, Rafsanjani endorsed Rouhani who seemed to be a relative unknown. Rouhani spent a lot of time in the UK including five years in Scotland. He became friends with Jack Straw before Jack Straw blocked appeals of the Lockerbie trial that pointed to Iran. The same day Rouhani won the election, Jack Straw flew to Tehran to congratulate him or perhaps to give him directions. Rouhani is no doubt a Freemason and has a British passport. He works with the Hessabys, and Mohsen Mohebi, a judge in the Hague tribunal who works for the Israelis.

The US should not complain as the Foreign Minister that negotiated  the US nuclear deal was a US citizen who spend his high school and college days in the San Francisco Bay Area. The US was basically talking to itself.

In his later years, Rafsanjani had over 100 Billion USD in overseas banks. He had Rafsanjani investment offices in the UK, Dubai and Riyadh Saudi Arabia. Gee, I thought Saudi Arabia and Iran were enemies. I guess it is all a game.

In January 2017, dear old Rafsanjani died. I wonder where the money went. The Shah’s son told the world he was going to overthrow Iran via violence. Only the right-wing Israelis back him.

Rouhani makes sure his oil friends give money for (his favorite) Mullahs. Is Rafsanjani’s money backing him in the assorted foundations in Iran or is he just a new colonial governor like my father-in-law? BP even got the National Iranian Oil company new contracts in Scotland’s North Sea with US government blessing. Gee, the Scots have SHELL and BP taking their oil and now giving a cut to Iran. I guess the Scottish National Party has a new complaint.

Is President Rouhani to be the new Rafsanjani, or the new colonial governor under the British?

The election is May 19, 2017. Cast your vote before someone blames the Russians!