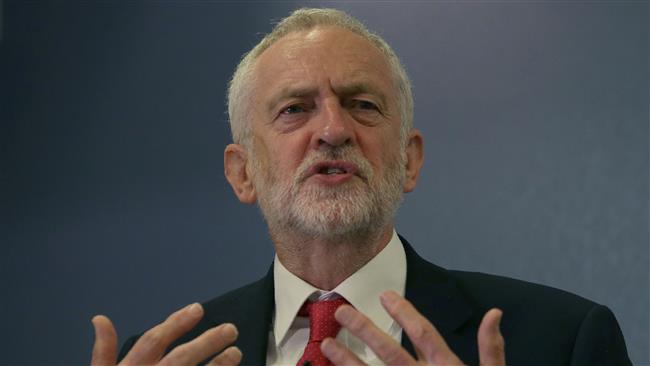 US President Donald Trump has made the world a more dangerous place “by recklessly escalating the confrontation” with North Korea and Syria, Jeremy Corbyn has said.

In a major speech on foreign policy on Friday at Chatham House in central London, Britain’s opposition Labour Party leader said Trump is determined to add to existing global problems and accused British Prime Minister Theresa May of pandering to the US president.

“And the new US president seems determined to add to the dangers by recklessly escalating the confrontation with North Korea, unilaterally launching missile strikes on Syria,” opposing the international nuclear agreement with Iran and “backing a new nuclear arms race” with Russia, he stated.

Corbyn warned that May was seeking to “build a coalition of risk and insecurity with Donald Trump.”

The Labour leader said he might halt the country’s airstrikes in Syria if he is elected prime minister in the general election on June 8, and accused May of trying to escalate the war in Syria.

“All wars and conflicts eventually are brought to an end by political means,” he said.

Corbyn, whose party is trying to close a popularity gap with the ruling Conservative Party, said that would want a “strong and friendly relationship” with the US administration but added “we will not be afraid to speak our mind.”

“The US is the strongest military power on the planet by a very long way. It has a special responsibility to use its power with care and to support international efforts to resolve conflicts collectively and peacefully,” he advised.

“Waiting to see which way the wind blows in Washington isn’t strong leadership. And pandering to an erratic Trump administration will not deliver stability,” he continued.

Corbyn said the US-led policy of regime change “in Afghanistan Iraq, Libya, and Syria – and western interventions in Afghanistan, Somalia and Yemen have failed… and made the world a more dangerous place.”

“This is the fourth general election in a row to be held while Britain is at war and our armed forces are in action in the Middle East and beyond,” he stated.

“The fact is that the ‘war on terror’ which has driven these interventions has failed,” he noted.

The Labour leader said wars have increased insecurity “at home,” and, “they have caused destabilization and devastation abroad. We need to step back and have some fresh thinking.”

The government of the incumbent British prime minister has been participating in airstrikes conducted by a US-led coalition against purported Daesh positions in Iraq and Syria since 2014.

The coalition has repeatedly been accused of targeting and killing civilians, without being able to fulfill its declared aim of defeating Daesh.

As a veteran peace activist, Corbyn has long been critical of London’s involvement in US-led wars across the world.