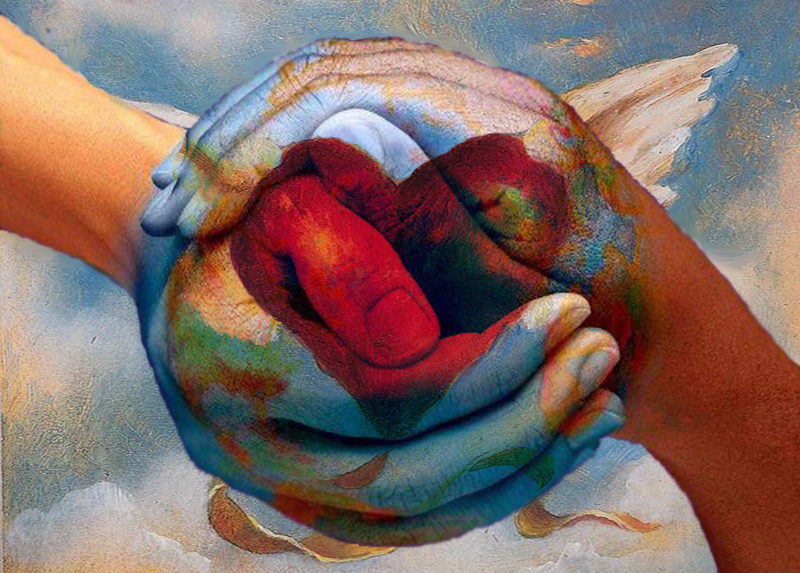 The very fabric of our present day reality is not only being questioned by Donald Trump’s egocentric world but being torn away by the far greater reality of another state of consciousness that exists beyond death and most certainly beyond ego consciousness and whose principle property is love, altruism and the urge to unite ~ and now it has been apparently scientifically demonstrated by my own experiences of the Unified Field as well as being reported by the BBC: Allen L Roland, Ph.D

“Death may be viewed as the curtain between the existence we are conscious of and one that is hidden from us until we raise the curtain.” Elizabeth Kubler Ross

Thus, Death or the idea of death, appears as an illusion measured by the limits of our consciousness ~ this would seem to explain why people who have had near-death experiences not only do not  fear death but have new values regarding love and being in service,

A BBC film suggests the reality of a loving state of soul consciousness ~ that exists beyond time and space but also beneath our deepest fears and most certainly beyond clinical death.

My own after death experience with my mother in 1987 (as seen in my VT article)  ~ also my ADE with my twin brother Bobby in 2013 (see my VT article) as well as 40 years of tapping into that all unifying energy as a heart centered therapist and now consultant still adds further proof to the existence of this state of soul consciousness that lies beyond time and space as well as beneath our deepest fears.

Also note how virtually all those people who have had a near death experience feel a profound need to be in service and claim their part, however minor, in a loving plan in action.

In August of 2013, I wrote an article entitled The Near and After Death Phenomenon explained where I featured a video of Dr Eben Alexander being interviewed about his book PROOF OF HEAVEN where he describes a profound all-encompassing world of Love ~ which ties in with all my findings. See Proof of Heaven video ~

But I also personally experienced or fell over into the event horizon of death four years ago when my service connected lung medication was changed and I suddenly woke up coughing, stopped breathing and everything faded to black ~ I remember nothing ~ but eventually became conscious of being in a dark tunnel and looking up and seeing a glass and black hair all over it ~ here’s what actually happened ~ my wife Keiko saw me sit up deeply coughing sitting straight up and I could not breath ~ I was totally gone consciously despite her several attempts to resuscitate me from apparent death ~ then she finally breathed air into my lungs and I woke up with that image as I returned from the brink of death ~ she would not let me leave ~ for I was not ready to go and she would not lovingly allow me to leave.

Let me share further evidence of this field of love by sharing another dramatic story of a near-death experience. In the late 1990’s I was interviewed by Jeffrey Schaub of KCBS TV in San Francisco regarding the meaning of the near-death experience. I was asked to comment on the film footage of a near death experiencer named Terry Meyers, who I had never met. After watching the film, I commented that her obvious need to be in service after the experience was very typical and confirmed that she had indeed experienced a state of soul consciousness.

Here’s her note to CBS after the show which was forwarded to me :

“Eight years ago I had a spiritual rebirth. A virus literally destroyed my heart in a matter of four days. While at the hospital, when my heart stopped, I had a near-death experience. After coming back to life, I was overwhelmed with an intense feeling of love and joy.

Everything was clear to me ~ my purpose in life and why this happened to me. I fully understood how everything in the universe is evolved around love and my deep need to be part of it ~ and today my desire to help others is driven by this passion!

Dr Allen L Roland’s television interview on KCBS validated all the feelings I had experienced like no one else has been able to do. It is as though he had looked into my soul and mind and was speaking my thoughts.”

Precisely true, for I was sharing my heart felt inner knowledge of the near-death experience and she realized I was telling a profound truth that she had indeed recently experienced ~ and which this video apparently scientifically confirmed.

This following BBC documentary video features in-depth case studies of Near Death Experiences including a dramatic (verifiable accurate) out-of-body experience, the most recent research studies, and balanced interpretations of NDEs from both skeptical and “believer” perspectives ~ virtually everything an inquiring mind would need for an introduction to NDEs and virtually all demonstrating the existence of a loving field of soul consciousness that exists beyond time and space.

This BBC production is one of the best documentaries made about Near Death Experiences and it features many top scientists who have studied NDE’s and other related incidents. See video ~

Watch the first part of six parts ~ for within that 9 minutes the essential truths of the NDE is easier to see;

But please note how close this comes to fully validating my long demonstrated Unified Field of love and soul consciousness that exists not only beyond time and space but also beneath our deepest fears and ego consciousness ~ and whose principle property is the universal urge to unite particularly as demonstrated with my clients as well as combat veterans with PTSD ~ and that is also what lies beyond the very same curtain that raises with both physical death as well as the Roland eight steps of ego transcendence.  For example, we may now be watching an embattled and mentally ungrounded Donald Trump in the third step of ego death, Bargaining and dueling with self-created enemies which will soon be followed by Depression ~ as a shocked world watches in Real Time as we vaguely recall the last days of the third Reich of Germany in the 1930’s and 40’s with Adolf Hitler.

“But it is clear to Ullrich that no one should have been surprised that Hitler’s ideologically driven career was destined to culminate in war and genocide. With Trump, of course, we have neither historical perspective nor discernible ideological core. The overwhelming impression is that his ego and need for adulation, as well as his inability to discern simple reality and tell the truth when his ego is threatened, are his driving forces, not ideology”  Christopher R. Browning / New York Book Review / Lessons from Hitler’s Rise

Heart centered spiritual consultant and advisor Allen L Roland can be contacted at [email protected] Allen is also a lecturer and writer who shares a weekly political and social commentary on his web log and website allenroland.com. He is also featured columnist on VT and is a featured guest on many radio and Television programs.