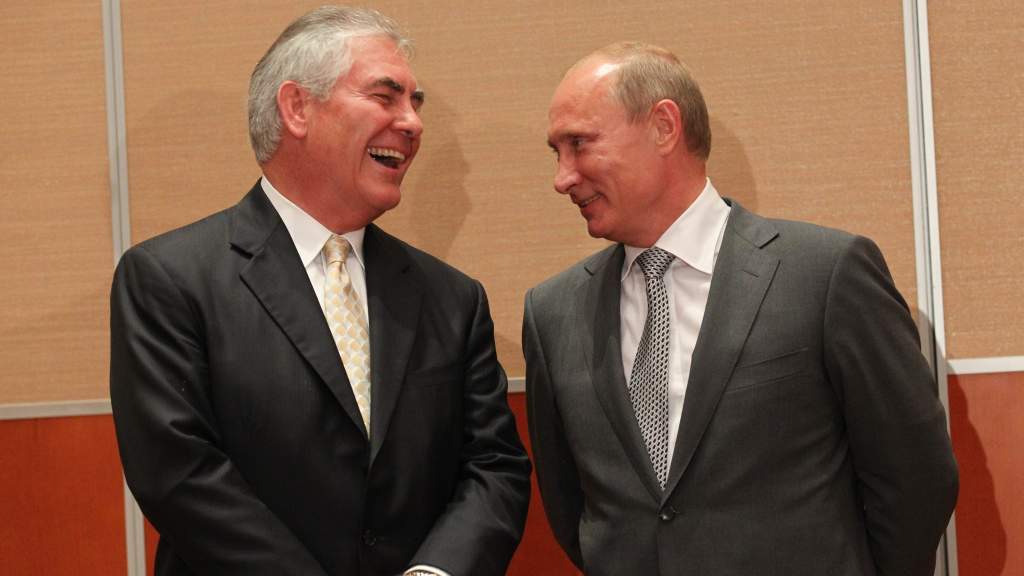 ’You cannot reset:’ No way for US & Russia to start over ‘with clean slate’ – Tillerson

[ Editor’s Note: This is one of these strange smoke-blowing exercises that we get way too often in the sheep’s clothing of pretending to be filling the public in on US policy, when it is just the opposite. Tillerson starts out with the incredibly cheap shot of stating the obvious, that there is no magic reset button for US-Russian relations.

Then he moves on to what his real goal is here, framing Russia for the  low “level of trust” gulf that currently exists, and even used the end of the Cold War as an anchor. Dear Mr. Secretary, you bombed out big time on this attempt.

It is not Russia that reneged on the deal with NATO to not attempt to pull the new independent East European states back into the old Soviet orbit on the condition that NATO would not encircle Russia. It was the US and its NATO partners who did this, starting when Russia was financially and militarily in a wrecked condition after having been looted by a marriage of Western deep state gangsters, Jewish-Russian oligarchs, and Israel, when Russia was not a threat to anyone. I am sure you remember this all clearly.

It is not Russia that later began ringing Western Europe and the US with 700+ military bases, and putting advanced missile defense systems in Canada, Mexico and the Bahamas. It is the US that did this to Russia, or I should say once again, the deep state gangsters that run that behind-the-scenes show, who are the real threat that can clearly be seen in retrospect, if anyone wants to.

And then Tillerson saves the worst for last, a flip-flop, claiming it is conclusive that the Russians had influenced the last election, and certainly not to help Hillary win, when no one has yet to put any proof on the table. Trump himself has attacked all, including the newly fired Comey, for not having publicly stated that “no proof” position, despite the FBI not having finished its investigation. You just can’t make this stuff up.

Dear Mr. Tillerson, You desperately need some new public relations people. But just in case I am wrong, please forward along the “proof” you have of Russian interference in the election, and for comparison, send me a list of elections that the US has interfered with over the last 40 years so I can do a comparison and announce who the winner of that contest is. I will chip in and pay for a ream of copy paper for you. I think 500 sheets should be enough.

After all sir, we do want the public to know what the truth is so they can take corrective action to throw out any crooks that we might have, who have been able to infiltrate our government so they can serve some various private interests. VT will publish your proof right away. You will be famous, but I must warn you that Donald may not like that… Jim W. Dean ]

Another “reset” in relations between the US and Russia is impossible as the two countries cannot just forget all their differences and move on at a time when relations are at a historic low, the US State Secretary Rex Tillerson told NBC.

The US and Russia have to take into consideration all their differences as well as all problems that exist in their bilateral relations and openly discuss them if they genuinely want to improve their relationship, Tillerson told the NBC’s Meet the Press Sunday show.

He went on to say that the political will to start another “reset” is, anyway, not enough to mend bilateral relations between Russia and the US. He said the current US administration prefers another approach.

“We’re starting with the slate we have. And all the problems that are on that slate. We don’t dismiss any of them. We don’t give anyone a free pass on any of them. They’re part of the entire nature of the discussion we’re having with the Russians,” he added.

He said the US should not focus on the problems it has in relations with Russia, but rather on the idea of improving the very same relations, because the current level of trust between the two nations is already so low that it hurts the interests of both Russia and the US.

“The relationship with Russia… is, I think, at an all-time low point since the end of the Cold War, with a very low level of trust,” the US Secretary of State said, adding, that it is “in the interest of the American people, it is in the interest of Russia [and] the rest of the world, that we do something to improve the relationship between the two greatest nuclear powers in the world.”

He went on to say that other world leaders, particularly those in Europe, also support the idea of warming relations between the US and Russia which are currently “largely viewed [as]… not healthy for the world.”

“It’s certainly not healthy for us, for the American people, our national security interest and otherwise, for this relationship to remain at this low level,” Tillerson said.

He conceded that it would “take some time” and “a lot of hard work” to “put us on a better footing in our relationship with Russia.” President Donald Trump is “committed to at least make an effort in that regard,” he said.

Tillerson then moved onto more familiar territory, saying he was absolutely sure that Russia interfered in the US elections, without providing a single piece of new evidence that could support such claims, only citing the ‘intelligence reports’ once again.

“I don’t think there’s any question that the Russians were playing around in our electoral processes,” he said, adding, that it is one of the “important issues that have to be addressed in the US-Russian relationship.”

“I think it’s been well documented, it’s pretty well understood, the nature of that interference, here and elsewhere,” Tillerson said.

He said it is “not new tactics on the part of the Russian government, directed not only at us but at others,” apparently referring to claims made earlier by some European officials, including those in France and Germany.

However, Tillerson expressed doubts about whether that alleged interference had had any real impact on the election result. He said the only real effect of this meddling was that it “yet again [undermined] trust between the United States and Russia.”

He also urged the US media and politicians not to focus solely on this issue in the US-Russian dynamic. Tillerson said “we have to look at this relationship in its broadest contours, and there are many, many important areas which require our attention if we are to bring it back to a relationship that we believe is necessary for the security of the US.”

The US Republican Senator from South Carolina, Lindsey Graham, who appeared on the same NBC’s Meet the Press Sunday show, called on his government to “punish Russia” for its alleged interference in the US elections.

“I do not believe we could go forward as a nation until we punish Russia,” he said, adding, that he personally “wants to punish the Russians.” The senator also said that he is “1,000 percent certain that the Russians interfered in our election.”

“It was the Russian Intelligence Service that hacked into Podesta’s e-mail, the DNC, to create chaos. They did try to undercut Clinton,” he added. He went on to say that he advocates imposing new sanctions on Russia over this issue.

“I have bipartisan sanctions against Russia for interfering in our election. And my goal is to put it on the President’s desk. And I hope he would embrace it,” he said. Pointedly though, he repeatedly stated that “Russia didn’t change the outcome of the election.”