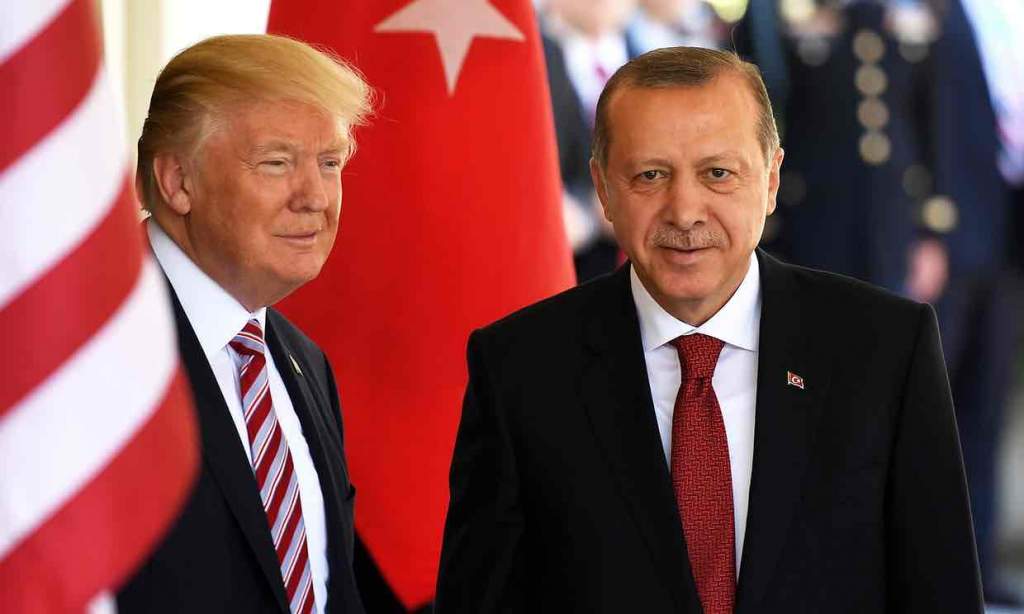 Breaking: US Marshals, on orders from Attorney General Jeff Sessions, working directly with Israeli intelligence, are shadowing dozens of current and former officials, certainly the fired Sally Yates and Comey, but others as well.  They are being surveilled and intimidated and their lives are in danger.  Sessions is in full cover-up mode after sending agents into Congress to silence testimony that could lead to impeachment.  America has become an occupied nation, the SS would have been more tasteful had the US lost World War II.

The article below is from the UK Guardian.  It gets nothing right, they simply don’t pay attention.  Erdogan and Trump have long worked together as Erdogan is a silent partner in Bayrock Corporation, the Russian/Turkish owned money laundering organization that is a 50% partner in Trump Soho.

Also remember, and the media is so remiss on this one as well, General Michael Flynn, the guy Trump demanded Comey stop investigating, was working for Turkey, not Russia, when he was fired.  We know he was working for them when he was running Obama’s DIA and this was why Obama fired him.  Trump was warned he was a spy, Obama told him.  Yates warned Trump’s people that he was dirty as well, and Trump calls it a “heads up.”  The reasons are simple, Flynn was on the Turkish payroll, this is the criminal act Sally Yates is referring to, nothing with Russia, who she also claims had compromised Flynn.

And for those of you who think $60k in Russia Today expense money compromises someone, think again.  By “compromise” they mean video of something far more severe than golden showers and Moscow prostitutes.  You can do that all day long, no, they had something far more interesting on Flynn whose personal tastes are rumored to go to the bizarre and beyond, as is generally the case in Washington.

You see, Flynn had to be kept on because he represented Trump’s business partners who helped rig the election, Flynn had been paid, what we found immediately, $530,000, by the Kosher Nostra, for him to use his security clearance to sit in on everything and give the mafia full and unfettered access to all NATO intelligence to pass on to Turkey.  By Turkey, we are oversimplifying a bit.  In post “phony staged coup” Turkey, with its new altered constitution, there is full mafia control of everything, no human rights, no political process, no press, it is a full mafia-run dictatorship that is so powerful everyone has to play there.

Also remember that, as you read on, Russia has agreed to supply Turkey with an S400 air defense system.  This makes the take the Guardian has on this, of Erdogan being victimized by Trump and Putin, a bit hollow.

We will finish up this introduction with a mention that the Kosher Nostra, the Israeli, Russian, Turkish mafia that has controlled Trump for decades, the organization founded by Roy Cohn as we are learning, to put real muscle behind organized crime as the “spaghetti/lasagna mafia” moved into obscurity.

Trump and Erdogan got at least one smile, as the mob brought thugs to Washington to beat protesters with clubs right outside the White House while DHS and Washington police, all on the pad, looked on and even helped.

The Kosher Nostra comes to Washington now, enters any building, can stop any official, any agent, show their little “Friends of Donald Trump” card they were given, and get help from the Secret Service, the FBI, DHS or any regulatory agency as though they were a big-haired backwoods preacher during the heady days of the Bush/Cheney takeover in the days before 9/11.  Washington is a joke, plow it under, let Washington, Jefferson, Lincoln and Kennedy lie dead in peace.

Move the capital to Vegas, Sheldon Adelson can help with that, I am sure.  If Israel’s capital can move to al Quds, DC can certainly relocate as well.  And so it goes…..

From the American Armenian Weekly, submitted to Veterans Today:

WASHINGTON (A.W.)—A group of peaceful demonstrators protesting Turkish President Recep Tayyip Erdogan’s official visit to the United States, were attacked by pro-Erdogan groups at the Sheridan Circle near the residence of the Turkish Ambassador to the U.S. Scenes from the aftermath of the attack (Photos: Screenshots of the ANCA live stream/Facebook)

“[This was] the type of violence you would never expect to see in America’s capital. It was the type of violence you’d expect to see in Erdogan’s Turkey and in other dictatorships,” said Armenian National Committee of America (ANCA) Executive Director Aram Hamparian, who captured parts of the attack and streamed the aftermath live on the ANCA’s Facebook page. “This is the very type of intolerance that has come to predominate in Turkey and it has now been exported here,” he added.

The demonstration, which began at Lafayette Square at noon, was organized by a coalition of organizations, including the Armenian National Committee of America (ANCA) and the American Hellenic Council. Several different groups participated in the protest including representatives from the Armenian, Greek, Kurdish, and Assyrian communities.

“I saw a group of peaceful protesters in Sheridan Circle—a grassy area across from the Turkish Ambassador’s residence—who were protesting and exercising their constitutional right to speak their minds, to hold signs, to share their opinions, and express their views get rushed from across the street by a group of a pro-Erdogan [demonstrators], who broke through the police lines and attacked literally anybody within their reach with their fists and anything else they could get a hold of,” Hamparian said in the live video moments after the attack. Hamparian went on the explain that the crowd of Erdogan supporters bear as many people as they could and that many were bloodied and had to be taken to the hospital.

“This is exactly the type of violence you see in Ankara and they are exporting it here. It’s one thing for the Turkish government to do that to its own citizens—[which is] a terrible thing. It is another thing for us, as Americans, to see that exported to the United States,” Hamparian said.

The Armenian Weekly will be following this story and provide updates as they become available.From the UK Guardian:

Turkey’s president, Recep Tayyip Erdoğan, put on a brave face after his White House meeting with Donald Trump, but there was no concealing that he had come away empty-handed. For this disappointing result Erdoğan can blame, among others, Vladimir Putin.

Turkish officials had billed Tuesday’s meeting as a pivotal moment for the two countries’ troubled relationship, and Trump, sticking to his script, made the expected noises in public. He commended Erdoğan as an important ally in fighting terrorism and singled out the Kurdistan Workers’ party (PKK), which both powers regard as a terrorist faction, as a particular threat. 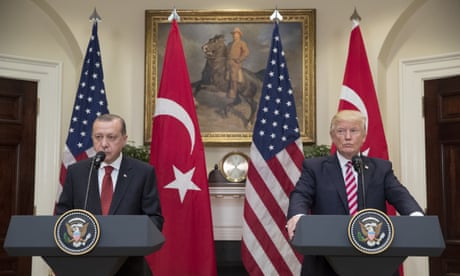 Ignoring his own state department, Trump stayed silent on Turkey’s poor human rights record, which deteriorated sharply after last July’s failed army coup. He promised to press ahead with US arms sales to Turkey, a Nato member. “We’ve had a great relationship and we will make it even better,” he said.