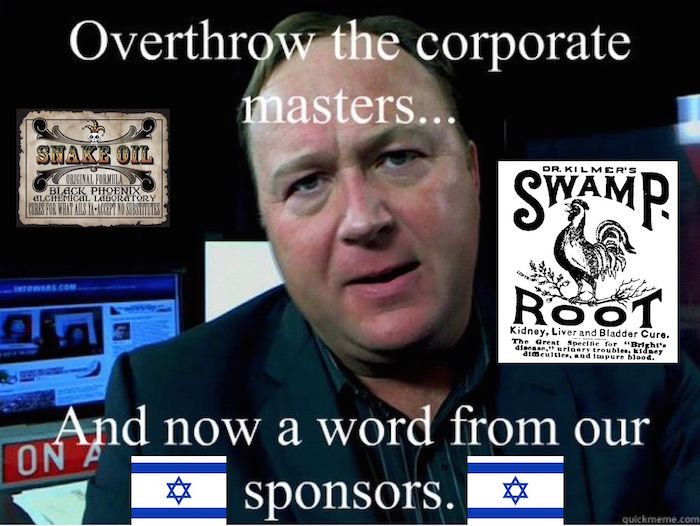 The topic of Alex Jones naturally came up. American Muslims used to be some of Alex’s biggest fans. I personally got Alex invited to the breakthrough Chicago 9/11 truth conference in June 2006, where over 1000 people – not 500 as the New York Times claimed – turned out.

Alex Jones played a key role in spreading public skepticism about the 9/11 Big Lie. One would think Alex of all people would understand that “Islamic terrorism” is a complete myth, a pure product of the 9/11 mind-control operation, and that the Islamophobia industry is run by the 9/11 perps.

Eddie of the Deen show also used to be an Alex Jones fan. But since Alex axed first rate journalist Kurt Nimmo in favor of carnival barker and hatemonger Paul Joseph Watson, the insane over-the-top Islamophobia at Infowars has alienated not just Muslims, but pretty much everybody with an above- room-temperature IQ.

I have repeatedly challenged Alex and PJ Watson to discuss and debate Islam. I’ve been a Muslim since 1994, and my Ph.D. is in Arabic and Islamic Studies. Why are they afraid of hearing my perspective?

Eddie of the Deen Show has also tried to start a dialogue with Infowars. He too has gotten no response…except for this disgusting bit of hate propaganda:

Twisting people’s words, taking them out of context, and framing them to mean the exact opposite of what they really mean is the cheap trick of a coward who knows he can’t hold up his side in an honest debate.

Alex Jones is apparently so terrified of me that I have become the new “He Who Must Not Be Named” at Infowars:

Are Alex and PJ cowardly bullies? Are they being forced to vomit up this obscene Islamophobia? If so, by whom?

I tried to be nice to Alex Jones for many years. But as his show degenerated, and his hateful side started taking over, I started calling him out.

But I would still love to have a civil conversation about Islam with Alex. So would Eddie.

There used to be something called the Fairness Doctrine. It was an FCC rule mandating that opposing viewpoints be given airtime.

But I don’t really expect any fairness from Infowars. Their ridiculous lies about Islam would collapse if they offered people like Eddie and me even 10% of the airtime they give to the haters.