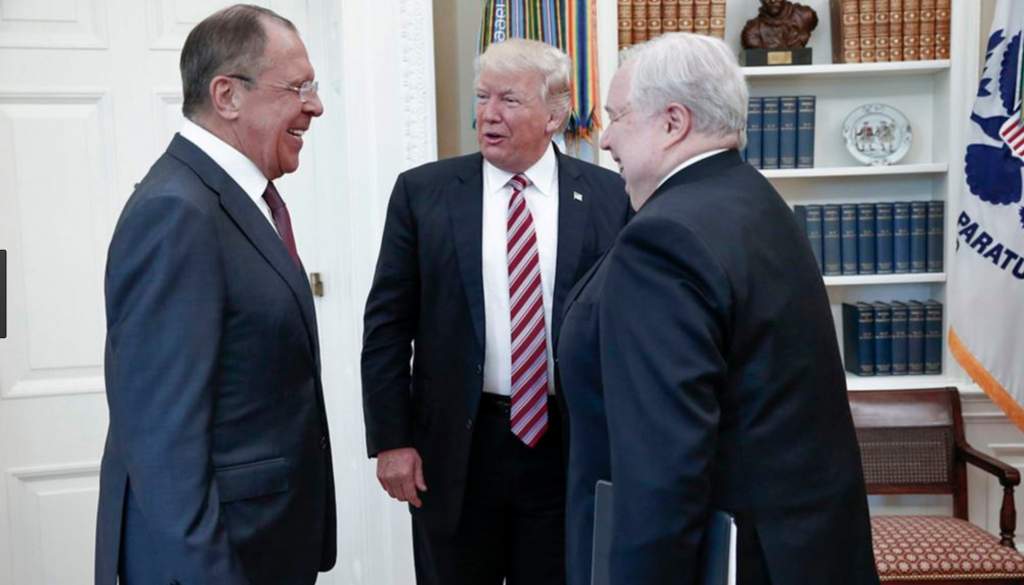 VT has been exclusively briefed on the meeting in Washington between President Donald Trump and Russian Foreign Minister Lavrov.  Much from this story is translated “on the fly” from Arabic and Russian.

Before we get into this, however, Dr. Bassam Barakat of VT Damascus has received an award from the Center for Reconciliation for his efforts in coordinating between Russia and Syria in the efforts of a establishing peace in Syria. This appreciation award has been given for the serious effective work with high proficiency and initiative in the implementation of national duty while carrying out the operations of achieving peace and security in Syria.

Additionally, for the help provided by Dr. Barakat for the officers of the Center for Reconciliation in the Syrian Arab Republic during the performance of their tasks for maintaining peace.

We now proceed with our exclusive briefing.  For background, Lavrov’s primary reason for the visit was to brief or rather warn Trump prior to his trip to Saudi Arabia.  Lavrov believes that Trump is being led into a trap by Israel who is pushing the US into providing military backing for a wider Middle East war against Iran and in building an Israelo-Saudi war coalition to be used to establish a New Arab World Order under covert Israeli control.

In this process, Shia Islam will be wiped out, and leaders such as Erdogan, who have their own ambitions, will face very real consequences. In the Middle East, the coalition Saudi Arabia is “buying” is called “Arab NATO.”  The Saudis and Israel are fomenting war between Sunni and Shia, the two major sects of Islam.

This is Hezbollah leader, Nasrallah, addressing issues with the Saudi King. (in Arabic)

Iran is Shia as is Iraq, the majority at least, along with Hezbollah in Lebanon.  The map below, will soon be a total conflict zone though conflicts have been ongoing for some time, not just Yemen but with Azerbaijan and Bahrain as well. With Russia siding with Turkey, Saudi Arabia is looking to Pakistan, Indonesia and Malaysia to garner forces, jihadists, terrorists and mercenaries if we are to be accurate, along with drawing nuclear armed Pakistan into the fray, taking advantage of inherent corruption there.

Behind it all is Israel. We are assuming that Russia’s Lavrov is of the belief that Trump is controlled by Israel more than any other source.  It was Lavrov’s hope that he would be able to warn Trump from allowing himself to be maneuvered into putting this “Arab NATO” coalition under US command and allowing Israel to “wag the dog” driving America into a war against Iran and Russia.

It is our belief that Israel has targeted Russia and that the current regime in Tel Aviv is under the control of the “Kosher Nostra” or “Khazarian Mafia,” the crime groups that underwrite Trump’s investments.

Trump has initiated a drone assassination program inside Iraq, a deal cut between Secretary of Defense Mattis and Iraqi President Abadi, and confirmed during Abadi’s March trip to Washington.

For two months now, the US has been killing Shia militia leaders who are making up much of the military effort against ISIS. This has stalled the Mosul offensive that would have ended successfully weeks ago.  The US, based on a secret agreement between Trump/Flynn and Turkey, has been protecting ISIS and stalling efforts to move on Raqqah as well.

The US has realigned efforts from Northern Syria to the South and has moved forces to Jordan for a planned attack on the Damascus government and a move toward the oil rich region of Deir Ezzor.

Iraqi forces would have crossed into Syria by now, based on an agreement with Damascus, pressuring ISIS in Deir Ezzor and allowing Syria to strengthen its hold there were it not for the Trump/Flynn Erdogan coalition that is secretly aiding ISIS.  This coalition is the real reason FBI Director Comey was fired as outlined in this VT article.

Now for the Lavrov briefing notes, listed as “highly classified:”

Our Russian sources are telling us that Trump and Lavrov discussed two issues, one being Syria, which is obvious, but more importantly, Trump’s upcoming visit to Saudi Arabia.

This is where things get dicey.

It is more than possible that Russia decided to arm Turkey with the S400 missile system to pull them out of the dangerous Israeli/Saudi alliance, the real power behind the upcoming world war that Lavrov warns of.

Under Israeli guidance, Trump has planned to reengage with Pakistan, pulling them into a military alliance with Malaysia and Indonesia, where the Saudi’s plan to recruit the mercenary armies they intend to use in a war against Iran.

Now Trump is ready to declare war on Shiite Islam alone.  Trump has been “schooled” by Israel on the “moral flexibility” of Sunni Islam.  Despite the fact that Wahhabist clerics financed by Saudi Arabia are the primary source of all Islamic extremism, long aligned with the CIA’s destabilization program against Iran under the al Qaeda CIA “franchise,” Trump has agreed to support Wahhabism, even in the US.