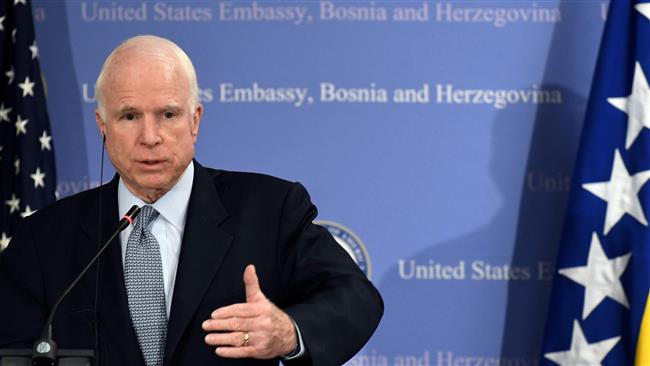 Senator John McCain has urged the expulsion of Turkey’s ambassador to the US following a violent confrontation between Turkish President Recep Tayyip Erdogan’s bodyguards and protesters in Washington, DC.

“We should throw their ambassador the hell out of the United States of America,” McCain said on Thursday.

“This kind of thing cannot go unresponded to diplomatically,” the Arizona Republican said, adding that legal action could be pursued.

Several other senators also expressed outrage after Erdogan’s bodyguards attacked pro-Kurdish protesters in Washington as he met President Donald Trump at the White House on Tuesday.

“This is Erdogan’s security detail. Somebody told them to go out there and beat up on these peaceful demonstrators,” McCain said. “This isn’t Turkey; this isn’t a third world country.”

The US police also branded the incident as a “brutal attack” on peaceful protesters. According to reports, Erdogan’s bodyguards pushed past US police and assaulted a group of protesters hours after the meeting.

Close-up footage shared on social media showed the bodyguards dressed in suits beating and punching people in the crowd.

Both sides accuse each other of provoking the brawl which left more than 10 people injured.

The US State Department slammed the violence in a statement as inappropriate, saying the rights of people to freedom of speech and peaceful protest should be respected.

“Violence is never an appropriate response to free speech, and we support the rights of people everywhere to free expression and peaceful protest,” said the statement.

The Turkish Embassy also released a statement regarding the violence on Thursday. It made no mention of Turkish security personnel, and blamed the unrest on demonstrators supporting the Kurdistan Workers’ Party (PKK.)

“The demonstrators began aggressively provoking Turkish-American citizens who had peacefully assembled to greet the president,” the embassy said. “The Turkish-Americans responded in self-defense and one of them was seriously injured.”

Turkey has stepped up its attacks against PKK positions in northern Iraq and Kurdish People’s Protection Units (YPG) outposts in Syria over the past few weeks.