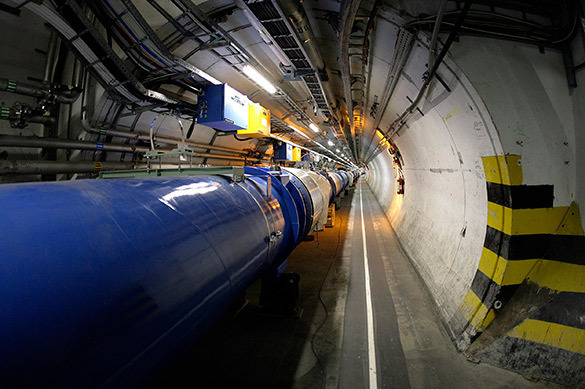 Scientists believe that new tests of the Large Hadron Collider may lead to an apocalyptic ending. The end of the world may occur as a result of the next launch of the LHC.

Yet, some experts predict an incredible breakthrough in the scientific sphere and the discovery of previously unknown phenomena.

According to others, the dispersal of atomic particles may lead to the formation of a black hole that may absorb not only planet Earth, but the entire solar system.

Some others put forward a fantastic theory, according to which the launch of the collider may destroy the barrier between the real and the nether worlds. The Large Hadron Collider may thus open “the gateway to hell” – a parallel world, from which evil spirits will attack our world.

Pravda.Ru requested an expert opinion on the subject from scientific journalist and writer Vladimir Gubarev – the only representative of the media, who was admitted to the Chernobyl nuclear power plant after the explosion.

“Conspirologists say that the Large Hadron Collider may explode, numerous apocalyptic forecasts appear again. Is there any reason for panic?”

“These fears are groundless. There was nothing unusual happening there, a number of improvements have been made at the collider. As for the probability of catastrophic consequences, to explode the collider, particles would need to fly towards each other at the speed of light. Now, they fly one after another, so there is nothing to worry about.

“If we could build another collider, in which particles would fly towards each other at the speed of light, their collision would create several nuclear galaxies would form in this place. We all would turn into some sort of a galaxy too, but this is physically impossible, so one can sleep peacefully.”

“Why do these horror stories appear again?”

“There is a very simple reason for it. Ignorance is a typical feature of the 21st century, whereas the 20th century was a century of education and scientific achievements. Probably, the achievements of science have frightened ordinary people and they all now believe in all sorts of ignorant things. Whatever happens, ignorance prevails. All this hype about the collider is a manifestation of total ignorance.”

“Experts predict an incredible breakthrough in the scientific field in connection with the launch of the accelerator. Do you think it will happen?”

“I would not say it would be a breakthrough – it will be a step that man will make in understanding the essence of the standard model. A qualitative new breakthrough is unlikely, I do not think that we will see any phenomenal discoveries. The launch of the Large Hadron Collider will provide another confirmation to the standard model of physics that everyone has recognized. I think a phenomenal discovery will be found somewhere in the depths of the universe that we are now beginning to look into with the help of space telescopes.”