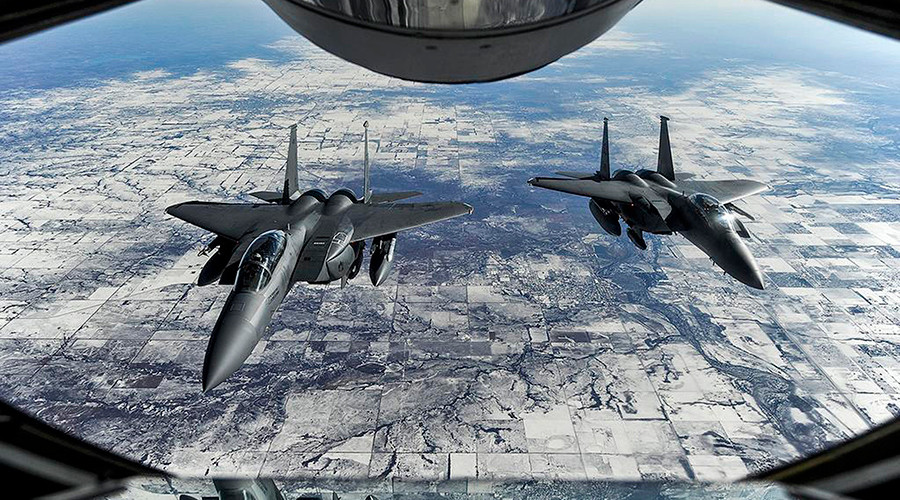 “Any military actions leading to the aggravation of the situation in Syria definitely affect the political process. Especially if such actions are committed against the Syrian armed forces… This is totally unacceptable; it is a violation of Syrian sovereignty. Of course, it does not help the political process,” Russian Deputy Foreign Minister Gennady Gatilov stated on Friday.

Damascus said on Friday that the Thursday strike hit a Syrian Army position on Al-Tanf road in the Syrian desert “which led to casualties and material damage,” Sana reports.

The US-led coalition airstrike on pro-government forces in Syria was called “aggression” and “government terrorism” by Syria’s ambassador to the UN and the government’s chief negotiator at the Geneva talks, Bashar al-Jaafari. He also said the US actions amounted to a “massacre,” which was discussed during the talks with Staffan de Mistura.

“We discussed the massacre that the US aggressor committed yesterday in our country,” Jaafari stated, as cited by Reuters.

“We want to focus on fighting terrorism represented by armed groups and the state and government terrorism happening against our country. This includes the American aggression, French aggression and British aggression.”

Senior Russian senator Konstantin Kosachev also condemned the strike, questioning whether it was a deliberate attack.

“You cannot consider the US-led coalition airstrike against pro-government forces on Thursday an accident or a mistake anymore. This is a deliberate action and its consequences are yet to be estimated,” Kosachev wrote on his Facebook page.

“This is not only an attack in Syria and against Syria, but also against Geneva [negotiations]. The US is irritated that the Geneva process is not under its control and, what is worse, it can be successful.”

The sixth round of Syrian peace talks in Geneva which started on Tuesday was “short, but productive,” Gatilov said. He also noted that UN Special Envoy for Syria Staffan de Mistura wanted the experts’ meetings to continue beyond the negotiations.

Earlier, the US-led coalition admitted striking a militia group fighting alongside Syrian government forces in southern Syria on Thursday. They said in a statement that the Syrian forces “posed a threat” to US and allied troops at Tanf base near the Syria-Iraq-Jordan border.

The incident took place as pro-government forces reportedly entered one of the recently implemented de-escalation zones in Homs province, where they allegedly clashed with the US-backed Maghawir Al-Thawra militant group (formerly known as ‘New Syrian Army’).

“We notified the coalition that we were being attacked by the Syrian Army and Iranians in this point and the coalition came and destroyed the advancing convoy,” Reuters cited a militant representative as saying.