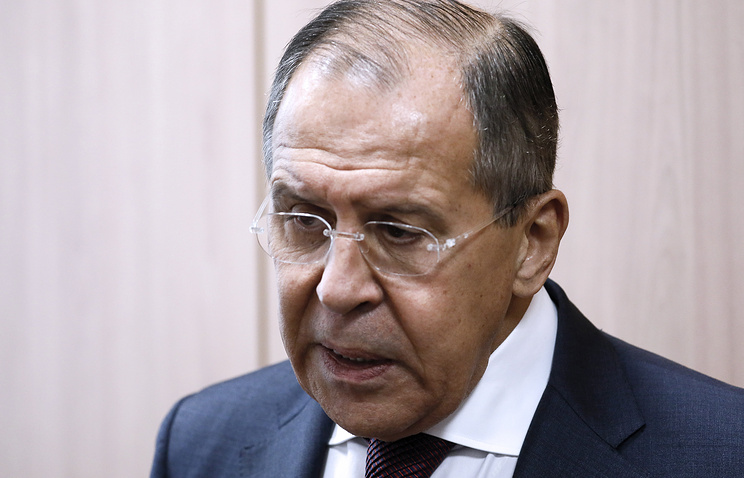 TASS/. The new strike of the US Air Force in Syria confirms Washington’s intention to use the Jabhat al-Nusra terrorist group (outlawed in Russia) for the fight against Bashar Assad’s government, Russian Foreign Minister Sergey Lavrov told reporters on Friday.

Moscow is concerned over differences in understanding the need to unite those who indeed fight on the ground and in the air against terrorists of the Islamic State and the former Jabhat al-Nusra, he said.

“We see the confirmation of an intention to use opposition and some extremists, including Jabhat al-Nusra, in the fight against the legitimate government of Syria,” Lavrov said.

This comes amid Washington’s calls to stop all contacts with Assad, he said, noting that the US Congress had passed a law demanding punishment for those who cooperate with the legitimate government of Syria.

“This distracts us from the Syrian settlement and the major goal of this settlement – preventing the seizure of Syria and other parts of the Middle East by terrorists,” Lavrov said. “So, what we hear about Washington’s position on Syria now is in fact coddling terrorists.”

Russia’s Foreign Ministry has no information that Washington warned Moscow before delivering an air strike on Syrian pro-government forces, Lavrov pointed out:

“I don’t know about any such warning.”

US air strike against pro-government forces in Syria was illegitimate and unlawful regardless of what had caused it, the Russian diplomat added:

“The US command said the strike was delivered because these pro-government forces posed a threat to the opposition which cooperates with the US-led coalition.”

“Whatever the reason the US command made such a decision, the strike was illegitimate and unlawful. It was yet another crude violation of Syria’s sovereignty,” he stated. GENEVA, May 19. /TASS/. The claims on a crematorium at the Sednaya Prison near Damascus are “a big lie,” Syria’s Ambassador to the United Nations and head of the government’s delegation at the intra-Syrian talks, Bashar Jaafari said. Jaafari noted that it’s no coincidence that these claims came a day before the latest round of talks began in Switzerland’s Geneva. This also happened ahead of talks in Astana and the meetings of the UN Security Council, he said. “These fabricated statements of the West won’t deceive anyone.”

The US Department of State said on Monday it has evidence that up to 50 prisoners have been killed in Syria’s Sednaya Prison complex daily and their bodies were burnt in a specially-built crematorium to ‘cover up’ the executions.

Jaafari also called an airstrike of the US-led coalition on pro-government forces in Syria is a new act of Washington’s aggression.

“This strike is the act of US aggression against Syria,” Jaafari said.

Jaafari noted that he discussed the US airstrike earlier on Friday at the meeting with Staffan de Mistura, the UN’s special envoy for Syria.

As the US-led coalition headquarters reported, the aircraft struck pro-Syrian government forces operating within the established de-escalation zone northwest of al-Tanf. The statement claimed that these units posed a threat to the United States and its partners.

Mechanisms on implementing the agreement on de-escalation zones in Syria have not yet been established, according to Jaafari.

“The mechanisms on implementing the agreement have not started working so far,” Jaafari said.

Jaafari noted that the agreement on de-escalation “refers only to certain areas and does not cover the whole territory of Syria.”

On May 4, Russia, Iran and Turkey agreed to set up four de-escalation zones in Syria. Under a memorandum signed at the talks in Kazakhstan’s capital of Astana, these four zones include the Idlib Province and some areas in the neighboring provinces (of Aleppo, Latakia and Hama), an area north of Homs, the Damascus suburb of Eastern Ghouta, and a couple of provinces in southern Syria – Daraa and Al-Quneitra.

In line with the memorandum, a joint working group was due to be set up within 10 days for defining the exact borders of de-escalation zones and working out details of carrying out monitoring of the ceasefire. The maps of the designated areas should be drafted by May 27.

Breaking/Exclusive 2021.12 There is Evidence Someone is Attacking the US with Deadly Levels of Radiation and it is being Covered Up