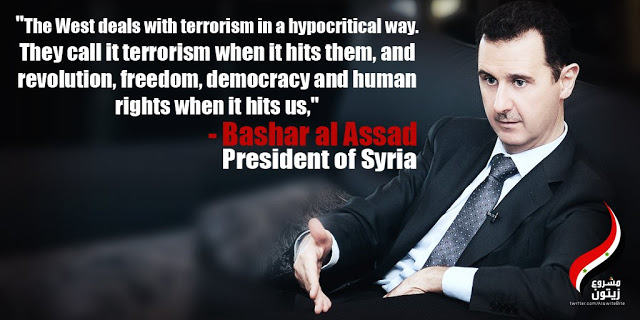 
Yes, fake news about Syria is still ubiquitous. If you read the Washington Post, you will get heading titles like this: “A ‘human slaughterhouse’ in Syria.” It states that

“a Syrian military prison where thousands of civilians have been killed “after being repeatedly tortured and systematically deprived of food, water, medicine and medical care.” Allegations of atrocities against civilians are nothing new for the regime of Bashar al-Assad, which has subjected entire towns to starvation sieges, dropped barrel bombs full of nails or chlorine on hospitals, supermarkets and schools and pulverized a U.N. aid convoy during the recent siege of Aleppo.”[1]

The BBC is no different. It stated last year that “Nearly 18,000 people have died in government prisons in Syria since the beginning of the uprising in 2011.”[2] The Daily Mail tells us that “Inside Assad’s death chamber: Three minute trials… then torture and hangings as report says Syrian regime ‘exterminated’ 13,000 captives.”[3]

Again, let us assume that those stories are true and the figures are correct. Do warmongers in America and the Zionist media seriously want to tell us that they have nothing to do with this? Would we have a Syrian war if the warmongers didn’t support ISIS and other terrorist factions in the region?

Do warmongers mean to tell us that Assad is literally slaughtering civilians? Is Assad that stupid? Do the civilians actually say that Assad is their enemy? Don’t they say that ISIS is being supported by the West? Why do you think the warmongers in America hate Tulsi Gabbard?

Gabbard has been doing what the warmongers and the Zionist media fail to do. She went to Syria, talked to the civilians and even the Assad government, talked to the Christians, and their conclusion was unanimously and independently stunning: why is the West, particularly America, supporting ISIS in the region in order to get rid of a sovereign government?

It wasn’t the Assad government that murdered to Syrian Catholic priests in 2010.[6] It was ISIS, the same terrorist organization that both Israel and the West have been supporting. The warmongers prefer to use fake news about Syria because that’s how they can convince the people who have been living on a steady diet of mass manipulation.

“Children represent 46.2 percent of the 4.68 million Palestinians living in the occupied West Bank, including East Jerusalem, and the Gaza Strip, and instability and violence defines much of their lives. Since 2000, Israeli forces and extremists have killed more than 2,045 Palestinian children, including 551 in 2014 alone, the majority during Israeli military offensives on the Gaza Strip, according to documentation collected by Defense for Children International-Palestine.

“… Palestinian children living in the occupied West Bank, including East Jerusalem, are routinely subjected to widespread and systematic ill-treatment and torture and the excessive use of force by Israeli forces. At least 48 Palestinian children from the West Bank, including East Jerusalem, and the Gaza Strip have been killed between October 2015 and March 2016 as a direct result of intensified violence, all except one at the hands of Israeli forces.

“Of this number, 34 allegedly carried out knife or gun attacks. The UN Office for the Coordination of Humanitarian Affairs (OCHA) reported more than 2,177 Palestinian children from the West Bank, including East Jerusalem, sustained injuries.”[7]

Now, get this from the New York Times itself—way back in 1993:

“Amnesty International, in a human rights report in July, said Palestinian detainees under interrogation are ‘systematically tortured or ill-treated’ by Israel. The International Committee of the Red Cross, whose representatives regularly visit Palestinian prisoners, has accused Israel of using interrogation methods that violate the Fourth Geneva Convention on treatment of civilians in occupied areas…

“Persistent reports and accumulating evidence of abuse, including the deaths of several Palestinians under interrogation in recent years, have produced a gradual change in official Israeli attitudes after years of secrecy and denial…

“Human rights monitors estimate that 500 Palestinian detainees are subjected to such treatment each month and that at least 30,000 have been interrogated since the beginning of the anti-Israel uprising in December 1987.”[8]

Do the math: 500×12 = 6,000. So, at least 6,000 Palestinians were being tortured every single year. Let us assume that this has been going on for 10 years. Do the simple math again: 6,000 x10 = 60,000. When was the last time that Israel got punished for this? Where are John McCain, Lindsey Graham, and the entire Neoconservatives when you really need them?

When Israel does it, it is all right. But when Assad presumably does it, everyone goes mad.

[7] David Palumbo, “The UN’s damning report on Israel and torture: The desperate case of Palestinian youth in the occupied territory,” Salon, June 17, 2016.