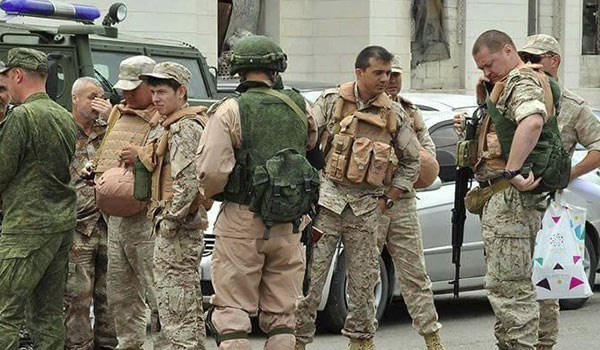 A military source confirmed that a group of Russian paratroopers and special forces have arrived in the Southern province of Sweida, after the US-led coalition fighter jets targeted heavily a military convoy of the Syrian pro-government forces near the town of al-Tanf at the border with Iraq.

The source told AMN that the Russian military personnel are in the region to advise the Syrian government troops in Southern Syria, while also helping to deter any potential response from the US and Jordanian forces that have carved a niche in Sweida and Homs provinces.

According to some media activists, the Russian forces are planning to build a base along the Sweida province’s border with Jordan.

Other media reports suggested that they are allegedly meant to engage the enemy forces and help the government troops capture the Iraqi border-crossing.

Lebanese Army General Charles Abi Nader, an expert in military strategy in the Middle East, told TASS on Saturday that the United States carried out a direct military intervention in Syria to prevent the establishment of the Syrian army’s control over the border with Iraq.

“There is no other explanation of the strike delivered by the US Air Force on the Syrian forces and units supporting them,” the general said, TASS reported.

He added that the border area in Eastern Syria, where the army units are carrying out offensive now, has major strategic importance.

“There is the only border crossing there, through which one can get to Baghdad now, taking into consideration that the Rutbah-Ramadi road has been cleared of terrorists of the ISIL,” the expert said.

“The goal of the US is evident – to prevent the restoration of transport links between Syria and Iraq and also Iran, which is the ally of Damascus,” he stressed.

The expert noted that a similar intervention of the US Air Force occurred in September 2016 in the outskirts of Deir Ezzur. Then, the ISIL militants used the airstrike of the US aviation to seize a defensive position on the Jebel-Sarda mountain near a military airfield, which serves as a major basis of the government forces.

As the US-led coalition headquarters reported, on May 18 the aircraft struck pro-Syrian government forces operating within the established de-confliction zone with Russia Northwest of al-Tanf. The statement claimed that these units posed a threat to the United States and its partners. Several servicemen were killed in the strike.

TEHRAN (FNA) – The Syrian Army troops continued their anti-terrorism operation towards the border region near al-Tanf passageway and managed to recapture a key region in Sweida province near the border with Jordan.

The army men engaged in tough battle with Jeish al-Hor terrorists in Eastern Sweida and managed to take back control over the strategic region of al-Zalaf Dam region at Sweida-Jordan border.

The army men also drove terrorists out of Zahra Um al-Salasel and al-Eiseh.

Well-informed sources said, meantime, that the army units also took control over 50 sq/km of Sweida Badiyeh (desert) which was under the control of the terrorists of Jeish al-Ahrar al-Ashayer and Jeish al-Aswad al-Sharqiyeh.

Relevant reports said on Saturday that the army and popular forces took back a large chunk of the terrorist-controlled territories East of Sweida province in the Southern parts of the country.

“The Syrian army and its allies seized more than 60 square kilometers of lands in the al-Zalfa region in Sweida province,” the Arabic-language media quoted a military source as saying on Saturday.

The military source noted that after securing al-Zalfa area, the Syrian army troops would push further East in order to secure the provincial border and lay siege on the Free Syrian Army (FSA) near the al-Tanf border-crossing to Iraq.