As Trump is visiting Israel today, after speaking to the “Muslim” world over the weekend, it is a good time to review how the “War on Terror” began – out of nothing, from nowhere, with only 5 US Citizen deaths in 1999 blamed on terrorism.

From the May 2, 2000 Los Angeles Times article, Report Cites Bin Laden’s Reach,  “The Clinton administration also claimed some success in its counter-terrorism operations. Five US citizens died in two terrorism related incidents in Uganda and Columbia. The death toll was the lowest in seven years.”

With terrorism being at its lowest in seven years in 1999, one would wonder what would prompt the State Department to make terrorism such a prime focus area in 2000, rather than working towards peace which was looking more possible because of the advent of the internet and our ability to communicate with one another globally? 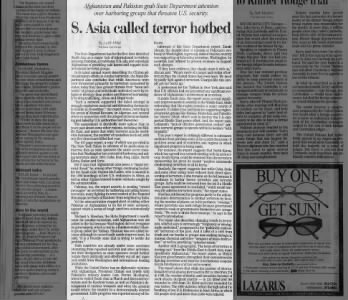 The alleged terrorist nations were chosen, not based on direct threats to the US or incidents that occurred, but potentially based on strategic goals, ignoring two terrorist sponsoring countries – Saudi Arabia and Israel. Saudi Arabia is clearly known for its sponsorship of terrorism through Wahhabist mosques known as madrasas all over the world and fueling the “War on Terror” with terrorists.

Israel has acted like the backbone both materially supporting the terrorists, in what was later to be the 9/11/01 attack and later in the wars that were promulgated following 9/11, including in Syria.

But, back to April 30, 2000 and an article entitled S. Asia called a Terror Hotbed by Judith Miller: “The 107 page (State Department) report, a copy of which was provided to The New Times in advance of its publication tomorrow, lists as state sponsors the same seven countries that Washington has accused of harboring and aiding terrorists since 1993, Cuba, Iran, Iraq, Libya, North Korea, Sudan and Syria.”

This was work was done by the State Department prior to the Bush Administration in 2000 when there was very little terrorism. It is suspected that around this time was when a purge within the US government, military and intelligence agencies was beginning against those who would fight against the Neocon agenda.

Terrorism as a construct grew out of the media, and was backed up by pro-Neocon agencies being created again, out of no where, based on nothing. The Department of Homeland Security is one that began this way. Here is an article on its creation from The Los Angeles Times on February 1, 2001. 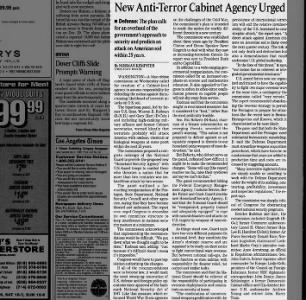 There were no facts and data to back any of the terrorism up, other than US assets to be labeled as terrorists such as Colonel Tim Osman also known as Osama Bin Laden.

The war on terrorism has been a completely manufactured war, one not targeting the real creators of terrorism – Saudi Arabia and Israel – for geopolitical interests. It was setup prior to 9/11/2001, as can be seen in articles written during that time, based on very little, if anything, and many things that could have been stopped or prevented if the US had its citizen’s interests in mind, including the incidents on 9/11/01.

So cui bono and why?

At this point, anyone in the intelligence community should be seeing the charade that is in front of them as a ruse. When Trump, a known individual associated with organized crime, goes to meet with the top two terrorism sponsoring countries, Saudi Arabia and Israel, after meeting with another known terrorism sponsoring country, Turkey, something has to be in the works. Is it an attack on Iran?

Why attack Iran that is in compliance with the nuclear agreement? To blame terrorism on Iran is stupid as Iran and Hezbollah have been successfully battling ISIS and terrorism in Syria. Is it because Iran is one of the few countries other than Russia, potentially, that would stand up to Israel and Saudi Arabia?

Is that what the “War on Terror” is about – to provide Israel the basis to dictate Middle Eastern policy and pick winners and losers, even against US interests?

What are US interests? Prior to 2000, US interests seemed to have been to preserve and protect secular democracies, to protect American citizens and to defend against those posing a direct threat to us – not creating a threat out of thin air at behest of those who would seek to bring us and our values down – enabling the threat and continuing to allow the threat to have the upper hand.

When thinking about values, one would have to think about the freedom of women as one of those values that the US as a “defender of freedom” would continue to work for despite those in power seeking to reduce those rights.

Let us examine Saudi Arabia vs. Iran on the treatment of women. A nice table is included here.

As women in Iran continue to garner more rights, the Saudi Kingdom continues to base its repression, not on anything real, but on its leaders’ feelings of repression being a benefit for them.

Fatwa from Sheikh Abdul Aziz bin Abdullah bin Baz, former chairman of the Senior Council of Ulama, “There is no doubt that such [driving] is not allowed. Women driving lead to many evils and negative consequences. Included among these is her mixing with men without her being on her guard. It also leads to the evil sins due to which such an action is forbidden.”

We can say different countries and cultures look at things differently, however who we back, and what they do is important.

The key is that, if we do not see the manufactured terrorism for what it is, America will loose and is loosing to organized crime and the terrorists that we created.

Why do the Neocons want us to loose our freedoms? Could it be that they favor repression and that the world is growing so diverse that it would be impossible to maintain their hegemony and control, if people are allowed to grow through communication with one another via the internet and connectivity through business? Would this connectivity surpass the need for war? Probably.

Back in 2001, there was a movement towards world peace that was starting in Asia. One only has to look at the photo in the article here and see the triumph of North and South Korean peace and potential reunification to understand the potential shift. 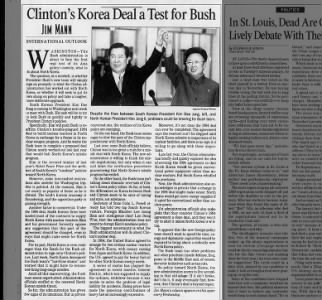 The article from February 28, 2001, Clinton’s Korea Deal a Test for Bush, calls into question whether the newly Supreme Court appointed President, Bush will work for peace on the Korean Peninsula or whether he will take a hard-line approach against the peace that former President Bill Clinton had worked for. When faced with the decision, Bush chose the latter. Did that make America safer or did it create an enemy where none was needed? The only way his decision making would make sense, would be if the objective was perceived war/arms sales profits over the security of the American people.

The desire to quash peace and foment war through terrorism could be seen as one of the potential objectives of the Bush Administration. This goal possibly involved even blackmail to prevent those who would normally work against such objectives. This is what makes the Jeffrey Epstein case so interesting when thinking about the leaders who visited his homes where underage girls were potentially used for sex-blackmail according to the girls’ sworn testimony.

Thinking about Israel and how the Likud party came to power, there was potentially a definitive weakness on behalf of Ehud Barak’s ability to maintain power and fulfill his promises inside Israel in 2001. 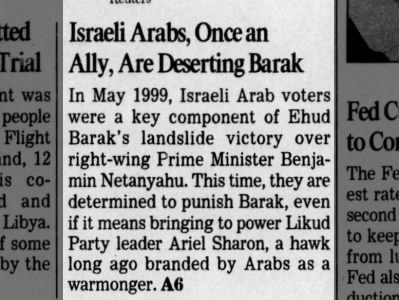 Was he debilitated by external circumstances forcing him to make decisions counter to his promises to Israeli Arabs and peace with the Palestinians? If so, this was a full court press, both in Israel and the US to foment the neocon agenda for war over peace, for the military industrial complex profits over global stability using covert means.

Were one to look at the ramifications of believing in the manufactured facade reality of manufactured terrorism, and not outing the lies and liars – the criminally corrupt, the treasonous traitors that have caused America to loose in standing globally through what amounts to organized crime, if there ever was such a thing known as the Galactic Federation or a group such as them that governs space for higher interests, it seems this group of traitors would be the ones causing humanity to loose by us not advancing to a higher level, one where we as people could actually participate because of what we could have achieved through peace, freedom, stability and sustainability. This group of corrupt individuals are blocking the advancement of humanity, and they have been clearly outed. How much longer will we allow the facade to continue?