… by Alla Pierce for Veterans Today

[ Editor’s note: Alla Pierce has brought us a wonderful remembrance article on the victims of the savage Ukie nationalists’ mass-murder attack at the Trade Union building in Odessa in May of 2014. VT covered this event extensively during those cruel days, when the US- EU- NATO-backed coup unleashed long pent-up passions, with the assistance of outside provocateurs.

The shocking crime was followed by another – the shocking lack of any real investigation, that sent a message that even more crimes like this could be done without fear of serious prosecution. Subsequent events, culminating with the Right Sector thugs being brought into the ministry of its leader, the powerful Interior ministry, where they savaged the people of Donbass under official sanction.

So many new mass killings have happened since then; the Odessa victims have been buried under the continuing carnage of the terror war we find ourselves in, where State sponsors, like Kiev was for these Odessa killings, are among the worst killers, hiding behind their sovereign immunity.

They huffed and puffed about the threat of terrorist Iran, without looking inside their own house for the devils and demons, or even their own hearts. And mass media challenged them on none of it, out of fear of their legions of murders, or just plain greed.

VT had editorialized that, if the Ukraine coup regime was not made to pay a heavy price for using terror against their own people, then we all would be at greater risk of “copycat crimes” in our own respective countries.

As we feared, state-sponsored terrorism continues to spread, with the only “enforcement action” being the attempts to hang it on Iran, a country that very publicly defeated the multi-decade hoax of being labeled as having a secret nuclear weapons program.

Trump confessed the scam even more by proclaiming today that he and Israel would see to it that Iran would never have a nuclear weapons. We were witness to the surreal threat against a country, whose leader has stated that he never wants nuclear weapons, once again portrayed as a threat to us all. They must either think we are really stupid, or even worse, we really are… Jim W. Dean ]

On May 2nd, three years had elapsed since the day of one of the most terrible and cynical tragedies of our time – the burning to death of living people in Odessa, Ukraine, at the Trade Union building. This bloody event was echoed in many of today’s events.

A recent speech by a Ukrainian political commentator on a Moscow TV who threatened to repeat the punitive action in Odessa, the celebration of the Victory Day by Odessa inhabitants, and even the uprooting trees previously planted in memory of the callously murdered residents of Odessa – all of this showed how deep the split in Ukrainian society still is since May 2014.

Felling trees is a pitiful natural consequence of the fear that the killers experience, knowing that there is someone who will eventually seek revenge one way or another.

Now on the eve of this date, there was a sense of tension throughout the city. After an event as awful as the Odessa massacre, it is quite impossible to live and not be afraid of retribution. To prevent people from coming to pay tribute to those who were brutally murdered, the Ukrainian media spread information about mines on Kulikovo field.

But it didn’t stop people from coming. They had to go through the security detectors, but had only flowers in their hands. There was a drone over people heads “to capture and digitize the faces of all participants in the action”, as one of Odessa’s authorities said, but they just laughed at it. All those actions – drone, security gates, etc. is nothing but result of fear that those feel who know that one day they will pay for what they have done.

People were coming and coming. There were many of them. As one of them said “We know that there are lots of us.” Odessa did not give up. Just hid for a while. It always been a heroic city, and we remember it.

The massacre of Odessa was a well-prepared act of intimidation, made pro rata with all the hallmarks of a terrorist attack, but carried out with a particular, insatiable cruelty. I share the opinion that it was a “ritual burning”, given the Zionist evil behind them.

From the very beginning of the bloody events in Ukraine, there was a regular eruption of atrocities carried out by Ukrainian militants on the days of Christian holidays. The Orthodox churches were purposefully destroyed and the Orthodox priests captured were tortured with particular cruelty.

Finally, this year, more publications have come to light that emphasize the role of Israel in organizing and conducting this terrible ritual. The video that recorded the Israeli “students” appeared immediately after May 2nd and was noticed by social networks, but … not really by the official media. Although, given who these media belong to, it is not surprising.

Even RT this year commented that awful mass murder in Russian version says “There were 48 people victims of the fire and more than 200 injured”. Excuse me, “Victims of the fire”? What about people who had only burned faces? Is not it obvious that they were targeted this way?

What about the woman near the elevator without clothes from her bottom? Doesn’t it look like she was raped, then killed? Finally, what about those who were killed by axes and baseball bats? Everybody still can see the videos where people who tried to get out of the burned building were shot from the ground.

Even more, first this source used a word “ignition”, then they change it to “fire set by radicals”. We used to read RT to find out the real news but if they are so “delicate” in giving information than what this information worth?

Those Israeli “students”, who, like they said, “helped” there, were trained “in the army.” In the House of Trade Unions were corpses with burnt faces, but at the same time with preserved hair – which is evidence that a special chemical means of origin were used.

Considering the chemicals and rubber gloves on the hands of Israeli “students” we can guess what kind of help was provided during the brutal murder of people in the House of Trade Unions. Hopefully, the final reward will find all “assistants”, and most importantly those who are behind them.

According to careful estimates done by Odessa residents about 400 people died as result of this massacre. Those 48 were only on the stairs. About two hundred, including children, were murdered in the basement by axes, baseball bats and some with guns.

Just like during the last world war, the Ukrainian bondservants performed the dirty part. The slave always finds a master. Talking about Ukraine we have to realize that it completely lost its identity. Embroidered shirts and the flag do not make the nation a nation. But has there ever been a national identity? Like any artificially created nation,

Ukrainians accepted the traits of those with whom they lived side by side. Residents of western and eastern regions of Ukraine have different mentality, values, ​​and different heroes. Galicians, accustomed to being serfs, still kneel in the full and figurative sense of the word. Now to their Washington masters, and during WW2 – to Hitler. Now they revel in the murders, savoring the details on social networks. They are bragging about the killing of the unarmed, bludgeoning people with axes or burning them alive, shelling the peaceful inhabitants of the Donbass.

Cutting down the trees that were planted in honor of burned Odessa people is also their big “victory”.

At the same time the inhabitants of the eastern regions heroically defended their homeland from the enemy invasion during the Great Patriotic War and do it now, in our days.

The Victory Day of this year showed that resistance to fascism is not broken. In the cities of Ukraine, the march of The Immortal Regiment passed, paying tribute to the memory of those who saved the Motherland from the enemies. In Odessa, in addition to portraits of soldiers who fought in the Great Patriotic war people also carried the portraits of those who were killed on May 2nd. 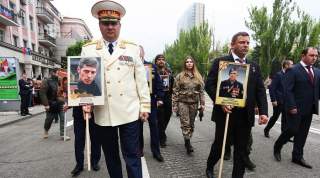 In Donetsk, the huge procession of The Immortal Regiment also carried portraits of today’s defenders of Donbass. The portraits of the legendary Motorola and Givi were in the very front.

Almost everywhere in Ukraine, the procession was accompanied by skirmishes. Somewhere the police tried to defend people, for which they paid later, as in Dnepropetrovsk, where immediately after the holiday, heads of Police department were dismissed.

Dissension is unacceptable in Ukraine, just as in 1933 in Germany. Still, the disorderly conduct during the 9th of May in Ukraine showed that we can expect a new wave of resistance.