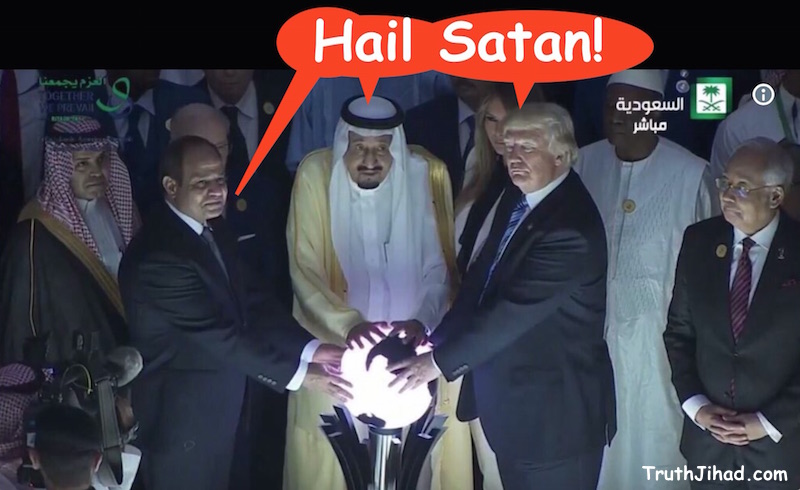 In a scene that would have been funny had its implications not been so dire, Donald Trump, Saudi King Salman, and Egyptian dictator al-Sisi – three of the four most demonic rulers on Earth – all grasped a glowing orb and swore eternal allegiance to Satan yesterday. (Earth’s #1 demon-in-human-form, Bibi Netanyahu, was physically absent at the proceedings, but presided over them in spirit.)

If you thought Trump’s doing the “sword dance” with a sword used to behead the Saudi rulers’ critics, and occasionally their slaves, I mean “domestic servants,” when they get out of line, was evil, you ain’t seen nuthin’ yet.

The demonic invocation took place at the inauguration of Saudi Arabia’s new “Global Centre for Combating Extremist Ideology,” which is in fact a disguised Satanic-globalist temple. (The word “Global” in its name is not an accident.)

Satan, revered by the globalist  New World Order high cabal, is known as the “Father of Lies.” And the assertion that Saudi Arabia and its US backers oppose extremist ideology is such an outrageous lie that it might boggle the mind of Beelzebub himself.

Saudi Arabia is the home of Wahhabism, a murderous and fanatical sect that swarmed across the Arabian Peninsula three centuries ago mass-murdering Muslims who disagreed with its extremist interpretations. Had Wahhabism not been weaponized and supported by the British Empire, and now the Zio-American Empire, it would have gone the way of the countless other Kharajite groups that have briefly arisen and quickly disappeared.

Today, Saudi Arabia and the US, alongside their masters in Tel Aviv, are the creators, funders and sustainers of al-Qaeda, ISIS, and the other Wahhabi-Takfiri “extremist” groups that they pretend to fight. The “Global Centre for Combating Extremist Ideology” is a truly Satanic lie.

So the real significance of the “Orb” ceremony is this: The lying leaders promoting the phony “war on terror” are using this monstrous, devilish  hoax to conquer the globe. By placing their hands on the glowing globe, Trump, Salman and al-Sisi  are swearing fealty to the Antichrist, known to Muslims as Dajjal, the coming False Messiah who will attempt to unite the entire world under a global dictatorship based in the rebuilt Third Temple in Occupied Jerusalem.

Freemasonry’s purpose is to dupe Gentile elites into going along with “Operation Antichrist.” The Sabbateans cooked up a ridiculous witches’ brew of mythological mumbo-jumbo and initiation ceremonies to lure the Christian elite away from Christianity and into Satanism. Today, Freemasonic lodges are a pillar (or twin pillars, Jachin and Boaz) of the globalist organized crime syndicate.

Trump’s next stop is Occupied Jerusalem – the Holy City currently occupied by Zionist demons bent on destroying God’s House, the al-Aqsa Mosque, and rebuilding a blood temple for their sacrifices. (They say they will only sacrifice “pink heifers,” but you can bet that Jeffrey Epstein & Co. will be flying in plenty of children for the private ceremonies in the basement.)

Trump and Bibi are supposedly fighting about how fast to implement this project. Bibi insists on moving the US Embassy to Occupied Jerusalem NOW, thereby setting off the final war that will culminate in blowing up al-Aqsa and building a Blood Sacrifice Temple in its place. Trump’s advisors say the time is not yet ripe.

Whatever happens when Trump and Bibi butt heads, you can bet that the Luciferian New World Order Project launched into high gear by the mass human sacrifice on 9/11 (subjugating most of the world to a Satanic Big Lie)  will be entering its final stages in the not too distant future.

Listen to my interview “Was 9/11 a Human Sacrifice?” with Tom Breidenbach