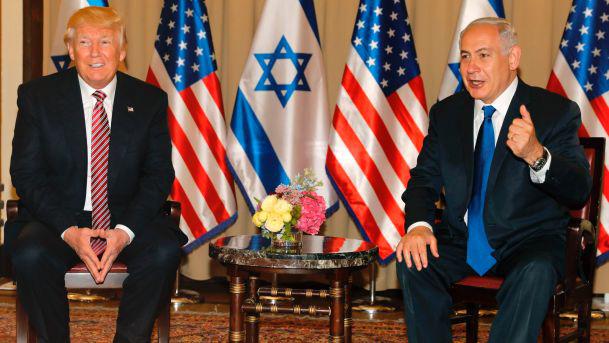 [Note: Israeli Prime Minister Binyamin (“Bibi”) Netanyahu and those controlling Bibi recognized who U.S. President Donald Trump is –long ago. So, they like him – a lot.

To save his butt in the upcoming Knesset elections, Bibi needs Trump to start ‘a big war.’ Bibi can’t be seen to be doing it; but Bibi’s Saudi ‘d-Ruler’ and Bibi’s U.S. president are suitable scapegoats and protagonists – especially for ‘a big war.’

To save his butt in pending U.S. scandals, Trump needs Saudi King Salman to help Trump start a big war and for Bibi to support Trump and the Saudi king in a big war. All three are facing the possibility of being deposed. Each can CYA for the other.

“Turkish President Recep Tayyip Erdogan: Foremost, I do not subscribe to the view that Islamic culture and democracy cannot be reconciled.

Of course, FBI ex-Director James Comey, new U.S. Dept. of Justice special prosecutor Robert Mueller, the U.S. Congress, and Western mainstream media are missing it. VT is not. Read prior VT articles to get it. You can’t tell the players without a scorecard.

The following Israeli mainstream newspaper article tells the story – only in part. Israelis recognize who Donald Trump is. Some of you do not. The article? Read it and weep.

The Israeli MSM Op-Ed is from a longtime writer/analyst for a house organ of what passes for the Israeli “Left” – certainly not pro-Bibi.

If Trump’s “Alt-Right base” (i.e., ‘Jew haters’ and ‘raghead haters’) were under any remaining illusions about who Trump is, this should dispel all delusions. The Op-Ed also contains several gems – catchy phrases about Bibi & Donny that you won’t find anywhere else. Without further adieu, following is the article. ~ Thomas J Mattingly]

Trump is the most ‘Israeli’ U.S. president in history, but not in a good way

There were plenty of hitches, glitches and embarrassments from both sides on the first day of U.S. President Donald Trump’s visit to Israel but, surprisingly, most of them weren’t his fault.

“Other than his bizarre and unsolicited claim “I didn’t mention Israel,” in connection with the intelligence he gave the Russians – which was reminiscent of Bill Clinton’s “I did not have sex with that woman” – Trump stuck to his script.

Trump said all the right words. He was bigheaded and boastful but still gracious to his hosts. He blasted Iran as the root of all evil. And he made Jewish hearts around the world flutter as he fondled the Western Wall in Jerusalem while his Jewish daughter Ivanka shed a tear nearby.

“Trump’s day culminated in a virtual and arguably cringeworthy love fest with Benjamin Netanyahu at the prime minister’s home in Jerusalem.

“Netanyahu, his eyes sparkling, his voice quivering, let loose with hyperbolic praise that competed with the fulsome flattery that Trump heard on Sunday from the Saudis.

Israelis, hearing Trump’s declarations throughout the day and listening to the ecstatic relief in Netanyahu’s voice, could easily reach the conclusion that after eight long and lean years with Barack Obama, Israel finally has a friend in the White House.

With Trump, of course, things can change dramatically, even as you’re reading this. One arrogant tweet, one unfounded accusation or one outrageous assertion – all inevitable over time, of course – and Trump’s magic moment will be over. But so far he’s doing well, from his point of view. He’s made no major mistakes. He’s being presidential. He’s projecting an image of popularity and even statesmanship that belies his dismal standing at home. And whether or not he cares, he’s winning Israeli hearts and minds.

“Unlike most Israelis, Trump probably wasn’t bothered or humiliated by the fact that MK Oren Hazan (Likud), whose depiction as a pimp was ruled ‘reasonable’ by a court of law, broke through at the reception ceremony at Ben-Gurion International Airport to force the president to have a selfie.

Trump didn’t even notice that Public Security Minister Gilad Erdan told him of a terrorist attack that had been ruled a traffic accident two hours earlier.

And though he may have been out of earshot, Trump would have absolutely embraced Sara Netanyahu’s self-pitying effort to find common ground with Melania Trump by whining that both the Netanyahus and Trumps are “hated by the media but loved by the people.”

Israelis, for their part, desperate to make sure Trump leaves for the Vatican on Tuesday feeling at least half as smug as he arrived from his grandiose reception in Saudi Arabia, preferred to overlook U.S. Secretary of State Rex Tillerson’s remarks in a press briefing in route to Israel, which might have created a ruckus at another time, in another place.

Tillerson adamantly refused to concede Israel’s ownership of the Western Wall, proving that previous administration evasions to the same effect were policy and not a fluke. He described Tel Aviv as the birthplace of Judaism – an apt description as far as the city’s secular residents are concerned, but an ignorant absurdity for anyone else.

“Tillerson also said that the U.S. had nothing to apologize for after Trump allegedly revealed sensitive secrets to the Russians, an assertion with which the heads of the Israeli intelligence community might take issue. [VT Note: Israeli intel chiefs hated what Trump did.]

Of course, Trump comes to Israel with a big handicap in his favor. First and foremost because not only is he not Obama, he’s actually the anti-Obama, through and through. That might not be much of distinction for most American Jews – quite the opposite, in fact – but for most Israelis, first and foremost Netanyahu, it is like a commendation. Most Israelis distrusted Obama. And when they didn’t, Netanyahu told them to do so.

Trump accentuated the contrast with his predecessor by making Israel the second stop on his first overseas trip, after Saudi Arabia – unlike Obama, who, big mistake, thought it best to skip Jerusalem after making his famous June 2009 speech in Cairo.

Trump constantly rebuked Iran and is trying to isolate it, unlike Obama, who signed a nuclear deal with Tehran and tried to bring it back into the fold. Trump talks tough on terror, but, like Netanyahu and unlike Obama, doesn’t care or even recognize that in some cases it might have underlying causes.

Trump doesn’t think much of other peoples’ freedoms and rights – it’s not clear he cares for America’s either, but that’s another story. And he’s certainly not preachy, like Obama – a trait that most Israelis dislike. Not to mention that he’s not black, has no Muslim ancestors and his middle name is John, like John Wayne, not Hussein, like Saddam Hussein.

But even without Obama, Trump, in some not necessarily complimentary ways, is more “Israeli” than any of his predecessors. He’s brash and abrasive and arrogant. He often talks before thinking; is insensitive to others; doesn’t care for political correctness or for the sensitivities of minorities; believes that might makes right; detests international organizations and multilateralism, and doesn’t think much of Europe either.

Like Sara Netanyahu, her husband and many other Israelis, he thinks he’s God’s gift to mankind, is consumed by a sense of victimhood, and has no doubt that the liberal media and establishment are out to get him. Of course, Israelis aren’t New York billionaires who married a striking model and got elected U.S. president against all odds, but I’m sure a surprising number of them think they could or should be.

The only trait Trump is showing that might jar with Israelis is his repeated insistence, amplified in Jerusalem, that peace is attainable and that he is the agent of its achievement. It is a declaration that was seen as naive and messianic and vaguely anti-Israeli when Obama dared make it, so it perplexes Israelis to hear Trump promote peace as a realistic option.

If Israelis, especially those on the right, are still hesitant to embrace Trump, it is out of concern that his pretension to be a peacemaker is like “Chekhov’s gun”: It will show up somewhere down the line, pointed at their heads.

It’s hard to imagine that Trump, who reportedly has an attention span like Pixar’s Dory, has any long-term peace strategy laid out. Given his troubles back home, that would be presumptuous anyway. Nonetheless, if he would have such a plan in place, theoretically, he certainly seems to be implementing it methodically.

One of the main complaints against Obama was that he was aloof, perhaps even condescending. He did not go out of his way to make Israelis love him or trust him. Trump, on the other hand, is anything but aloof. He may be a billionaire born with a silver spoon in his mouth, but he’s a steak-eating, foulmouthed commoner in his behavior – much like the unbearable Hazan, in fact, who lurched at him for a selfie.

If a prerequisite to achieving peace is making Israelis trust you to the extent that they will find it hard to say no when you eventually lower the boom with a peace plan that they find indigestible, then Trump is on the right track. His picture at the Western Wall, with Ivanka dressed like a dutiful frum wife in the women’s section, will serve as a powerful icon of his trustworthiness that could prove indispensable in the future.

This is all based, of course, on a series of unlikely assumptions: That Trump isn’t full of hot air; that he won’t put his foot in his mouth in the next few hours; that he has the stamina to invest in the peace process; that he won’t give up at the first sign of difficulty; and that he won’t turn around and put a gun to Israel’s head before it’s absolutely necessary. Oh yeah, and that he won’t be impeached.