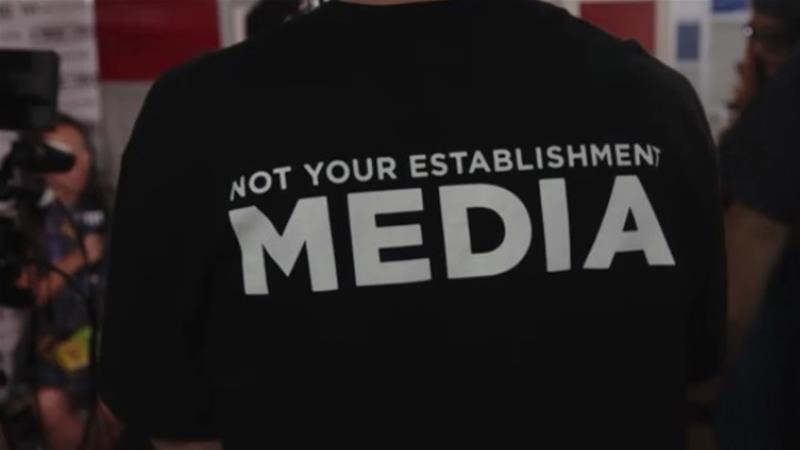 Americans are slowly but surely realizing that fake news and fake journalism are just about everywhere in the media. People are suddenly coming to grip with the fact that fake news and just plain lies are suffocating a large part of America and that political whores and prostitutes will do just about anything for money, fame, and power.

If political prostitutes have to fake the evidence in order for you to take their wicked ideology seriously, you can guarantee that they will do it in a heartbeat. If they have to summon categorical lies so that you will fall into their trap, then you can sure that they will not hesitate to proceed.

If the same prostitutes have to fake just about anything so that you can continue to support them, then they will invent evil things as they go. Classic examples are again the Iraq war and the debacle in Syria. One expert declared that

“Every major institution from the presidency to the courts is now seen as operating in a partisan fashion in one direction or the other.”[1]

It gets more interesting:

“Eighty percent of Republicans echoed President Donald Trump’s claims that the press is filled with fake news stories, while 60 percent of independents and 53 percent of Democrats said the same. Eighty-four percent of those polled also said that they had a tough time trusting online outlets, believing that many of them also spread fake stories.”[2]

The Zionist media and the Neocons have been relying on fake news from time immemorial. As we have already suggested, they lied about Iraq’s weapons of mass destruction; they lied about Libya; they lied about Syria; they lied about anything that they do not like. And who pays the price? The average taxpayer and decent people in the Middle East—people who have nothing to do with terrorism.

But that’s not all. After lying about Iraq for years, “the US government’s shoddy tracking and record-keeping processes allowed $1 billion worth of military equipment to go missing from its assistance packages in Iraq.”[3]

What could America do with $1 billion? Couldn’t the government use that money to put people back to work? Couldn’t they at least use it to help US veterans who have been physically and psychology wrecked by perpetual wars for Israel? Couldn’t they provide some help to students who are being buried beneath the avalanche of college debt?

And why is Donald Trump still listening to Neocons and warmongers in order to incite conflicts in far-distant countries such as North Korea? Didn’t warmongers ally with Stalin, arguably the greatest mass murderer in the twentieth century?

Does the War Party mean to tell us all that Kim Jung-un is worse than Stalin? If not, why can’t two grown men sit down and have a reasonable discussion about their differences in order to avoid war? Why can’t Donald Trump tell warmongers that they are fired?

You see, one needn’t be an intellectual to realize that the Zionist political system is logically incoherent and existentially unlivable. And over the past few months, Trump has facilitated that incoherent system. As one writer has recently put it,

“Even by Trumpian standards, the volte-face is brazen. In his first few months in power, we have witnessed the trademark Trump Turnabout on issues ranging from NATO to China to the Export-Import Bank. We have listened to him go from praising Bashar al-Assad and rebuking Janet Yellen on the campaign trail, to praising Yellen and rebuking Assad in office….

“Speaking to the New York Times last year, Trump claimed that, without U.S. support and protection, ‘Saudi Arabia wouldn’t exist for very long.’ The real problem, he continued, was that the Saudis are ‘a money machine … and yet they don’t reimburse us the way we should be reimbursed.’ Asked if he would be willing to ‘stop buying oil from the Saudis’ if they refused to pull their weight, Trump responded: ‘Oh yeah, sure. I would do that.’”[4]

It was Trump himself who lambasted Saudi Arabia for executing homosexuals. Then it was the 9/11 attack. “Who blew up the World Trade Center?,” asked Trump last year. “It wasn’t the Iraqis, it was Saudi — take a look at Saudi Arabia, open the documents.”[5]

According to this logic, the Saudis blew up the World Trade Center, but America needs to make an alliance with the Saudis. Syria has never attacked America, but America needs to overthrow the Syrian government, obviously for Israel. Saudi Arabia is still supporting Sunni Terrorism. As Beau Grosscup of the University of California has argued:

“The arms deal signals that another US administration is willing to ignore the Saudis’ major role in Sunni terrorism… in return for allowing the US to buy Saudi oil in US dollars.

“Like presidents Bush and Obama before him, Trump drew the world of terrorism in simplistic, bi-polar, and as he said, ‘battle between good and evil,’ imagery. The problem is, while politically useful at home, this imagery has no relationship to reality.”[6]

It gets even more interesting because not a single Neocon puppet has actually argued that we need to bomb the Saudis or that we need to ask them to respect homosexuals and women.

Remember how Jewish Neocon Ben Shapiro was running around like a wild buffalo saying crazy things like Russians need to be liberated from an oppressive regime because the government jailed a Trotskyite group which goes by the name of Pussy Riot? Well, when it comes to Saudi Arabia, Shapiro hasn’t provided a full critique of the regime.

Once again, the Zionist or Neocon ideology can only work in the minds of the Neoconservatives, the Israeli regime, and the War Party. In order to propagate the Zionist ideology, the warmongers use lies, fabrications, and obviously fake news.

The good thing is that America is waking up. This is really encouraging. Hopefully this will be another version of what Hegel would have called the “cunning of reason.”