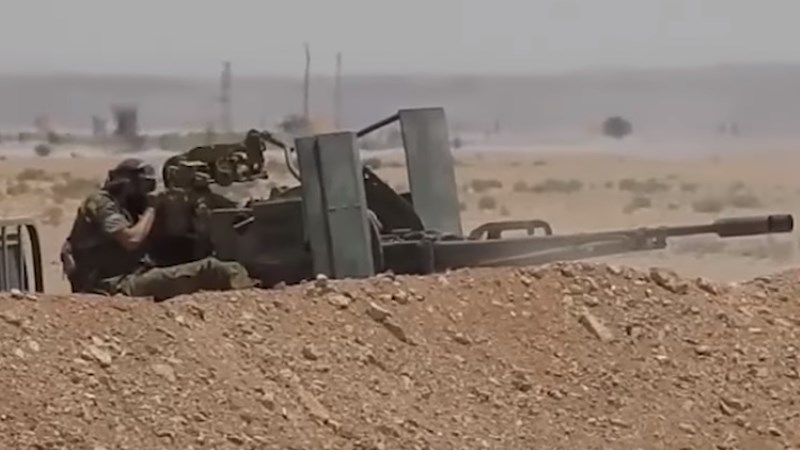 [ Editor’s Note: VT was right again. We smelled right away that this new desert fight in Syria was not a skirmish that Damascus had assigned to some throwaway militias to give them something to do. I could not say for sure that, before the US bombing of the convoy doing a light probe on Al-Tanf, it was going to be as big as announced today, but it sure as hell was after that incident.

How do I know? It’s because it takes several days to pull the logistics together to do this for a major advance without tipping your hand early. What we have seen so far is fighting by troops that were already in place and quickly thrown into securing deeper safe flanks on the roadways for major advances, so they would not be traveling down IED shooting-galleries.

The  other clue, almost never mentioned in the press, was the 100% air support that even Syrian recon missions were getting, to save on casualties and keep morale up. Anytime that SAA forces on point ran into a defended position, they could get air support before sending armor and infantry in.

We can now assume that the new Russian Special Ops in-theater reports are probably true, as I suspect the Russians would want them to be in this fight. Moscow has been rotating the crews so their military has more combat vets in the ranks, as future trainers and for the morale it engenders. They already did this with their pilots.

We are watching the Popular Militias on the Iraqi side closely to see if they can get into this fight in a timely fashion, which could make a huge difference. But needless to say, there are a lot of variables that come into play… Jim W. Dean ]

On Thursday, the Syrian Arab Army (SAA) and its allies announced start of the Operation “Grand Dawn” aimed at liberating the eastern Syrian desert from militants. The “Grand Dawn” operation will reportedly become the biggest operation against ISIS in Syria.

The SAA has already damaged the offensive capabilities of ISIS in central and southern Syria, and prevented the US-led coalition from threatening the capital Damascus.

According to the Hezbolalh media wing in Syria, the SAA and its allies have so far managed to capture more than 1,300 square kilometers in the area between Palmyra city and the eastern Qalamoun area. In the course of its advance, the SAA captured the villages of Sawanah and Khanifis. According to unconfirmed reports, the SAA also managed to capture the village of Olayana south of Palmyra after the withdrawal of the Syrian Free Army (FSA) from it.

Through this great advance, the SAA has eliminated ISIS forces between the southern Palmyra countryside and eastern Qalamoun. Moreover, it has besieged Jaish al-Islam militants in eastern Qalamoun ,as well as foiled a possible Free Syrian Army advance towards Damascus.

Photos showing the government advance in the province of Homs (source):