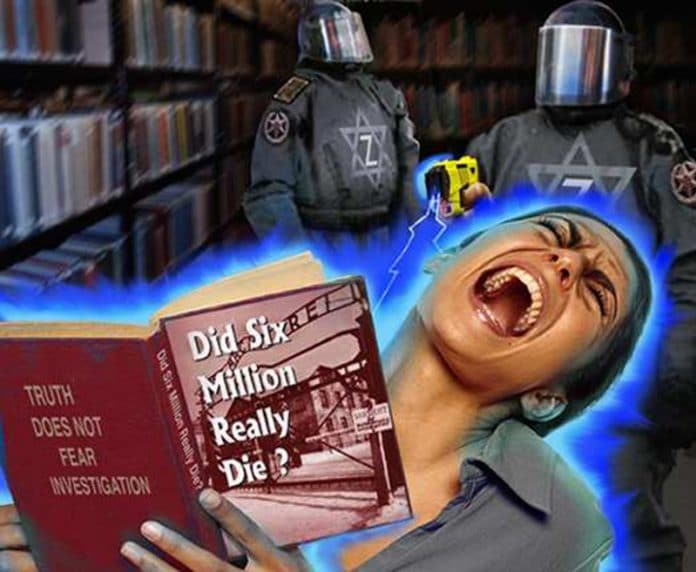 For only $3.95 a month you can listen to shows on-demand before they are broadcast – and also get free downloads. Help Kevin keep these shows on the air – become a subscriber today! Or if you prefer, PAYPAL a one time donation, or a regular payment, to truthjihad(at)gmail[dot]com.

My recent article Jeff Bezos, Amazon endorse holocaust denial begins:  “In what amounts to a ringing endorsement of the claims of Holocaust revisionists, Amazon.com has apparently concluded that their books cannot be effectively refuted – and therefore must be banned.”

Now that the “rising tide of anti-Semitism” (as evidenced by nonexistent cemetery vandalism and Israeli Jews phoning in fake threats to other Jews) has been exposed as a hoax, will Amazon un-burn all those hundreds of books?

“That Jews suffered greatly during the Third Reich is not in question, but the notion of a premeditated, planned and industrial extermination of Europe’s Jews with its iconic gas chambers and immutable six million are all used to make the Holocaust not only special but also sacred. We are faced with a new, secular religion with astonishing power to command worship. And, like Christianity with its Immaculate Conception, Crucifixion, and Resurrection, the Holocaust has key and sacred elements – the exterminationist imperative, the gas chambers, and the sacred six million. It is these that comprise the holy Holocaust which Jews, Zionists, and others worship and which Germar Rudolf and other revisionists question.”

During the first hour, Germar discusses Amazon censorship and describes how his scientific work earned him a prison sentence. He returns for the second hour to focus on his scientific area of expertise: the chemical evidence for alleged Nazi gas chambers (human and/or delousing chambers). We also discuss the larger historical issues, including the unpunished Allied war crimes during and after World War II, and end by commiserating about the sad state of modern European culture.

Germar Rudolf studied chemistry at Bonn University, where he graduated in 1989 as a Diplom-Chemist, which is comparable to a U.S. PhD degree. From 1990-1993 he prepared a German PhD thesis at the Max Planck Institute for Solid State Research in conjunction with the University of Stuttgart, Germany. Parallel to this and in his spare time, Rudolf prepared an expert report on chemical and technical questions of the alleged gas chambers of Auschwitz, The Rudolf Report. He conclude in it that “the alleged facilities for mass extermination at Auschwitz and Birkenau were not suited for the purpose as claimed.” As a result he had to endure severe measures of persecution in subsequent years. Hence he went into British exile, where he started the small revisionist outlet Castle Hill Publishers. When Germany asked Britain to extradite Rudolf in 1999, he fled to the U.S.. There he applied for political asylum, expanded his publishing activities, and in 2004 married a U.S. citizen. In 2005, the U.S. recognized Rudolf’s marriage as valid and seconds later arrested and subsequently deported him back to Germany, where he was put in prison for 44 months for his scholarly writings. Some of the writings he got punished for had been published while Rudolf resided in the U.S., where his activities were and are perfectly legal. Since not criminal under U.S. law, he managed to immigrate permanently to the U.S. in 2011, where he rejoined his U.S. citizen wife and daughter. He currently resides in southeastern Pennsylvania with his wife and three children.