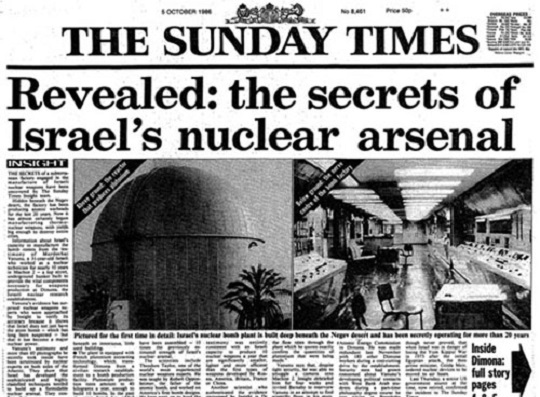 Paul R. Pillar is not your typical guy. He spent twenty-eight years in the CIA and is now a non-resident senior fellow at Georgetown University’s Center for Security Studies. He graduated from Oxford University and then received a Ph.D. from Princeton in 1971 and 1987, respectively.

Pillar has implicitly argued that Israel has become its worst enemy by playing double standards in the political landscape, particularly with respect to its nuclear weapons. And by siding with terrorist regimes in the Middle East, the Trump administration has actually taken “sides in the Middle East.”[1] Pillar wrote back in 2014:

“We have the spectacle of the government of Israel being by far the most energetic rabble-rouser on the subject of a possible Iranian nuclear weapon, to the extent of repeatedly threatening to attack Iran militarily.

“Some might call this irony; others would call it chutzpah. Anyone would be entitled to say that any state that not only refuses to become a party to the Nuclear Nonproliferation Treaty (NPT) or to subject any of its nuclear activities to any kind of international inspection or control but also already possesses kumquats or their equivalents has no standing to conduct such agitation about Iran, which is a party to the NPT, has already subjected its nuclear activities to an unprecedented degree of intrusive inspection, and is in the process of negotiating an agreement to place even further limits on its nuclear program to ensure it stays peaceful.”[2]

Obviously this is contrary to what Immanuel Kant would have called practical reason. Israeli officials have boxed themselves into a corner by trying to force a foreign policy on Iran while they are not willing to apply the same policy in Israel. Iran signed the Non-Proliferation Treaty, but Israel didn’t; Iran allows inspections, Israel does not allow any inspections whatsoever. Israel does not even want to discuss the issue.[3]

On the other side of the spectrum, both the Neoconservative machine and AIPAC have been handcuffing U.S. officials to either stop Iran from acquiring nuclear energy or face another war in the Middle East.[4] At the same time, more than five million decent Americans have been out of jobs, learning in the spring of 2012 that the government is going to cut unemployment funding.[5]

Moreover, programs at major universities such as the University of California will have to be cut because of a lack of funding. In 2011, state education officials asked the financial manager of the Detroit Public School district to shut down half their schools.[6]

Meanwhile tuition keeps increasing, and class sizes keep doubling at major universities.[7] New York officials also plan to shut down three charter high schools that have had a long history of financial and management problems.[8] On top of that, young people with college degrees are finding it hard to get a decent job.[9]

It seems then that useless and detrimental wars in the Middle East are more important than the average American being unable to find a job. By May 2012, the U.S. told Israel that they were ready to strike Iran if it failed to drop its nuclear program.[10]

While the IAEA was making progress toward serious dialogue with Iran, Israel and the Zionist machine kept saying that Iran was deceiving the West,[11] despite the fact that both U.S. intelligence and Israeli communities agree that Iran is not developing nuclear weapons.[12]

The IAEA then succumbed to ideology. Even though they knew that Iran did not have weapons of mass destruction, they still believed in November 2012 that Iran could have other weapons somewhere![13] In other words, the weapons had to exist. Sure enough, by the middle of the month, the IAEA “found” what they were looking for: a nuclear fuel which they believed could be converted to nuclear weapons.[14]

David Sanger of the New York Times was quick to title one of his articles “Iran’s Fordow Nuclear Complex Reaches Capacity.”[15] In other words, we are back to the same old propaganda machine that led us to Iraq. According to Zionist propaganda, which is Talmudic in its political orientation, Israel’s existential threat was Iraq, but now it is Iran. In the process, many rabbis are praying that this new mortal foe against the Jewish people will soon pass as well.[16]

For his part, Netanyahu blames Western powers for even trying to come up with a reasonable proposal with Iran.[17] Strategic Affairs Minister Moshe Ya’alon said something similar, declaring that Iran is playing games with the West while it is building its bomb.[18]

Not only that, contrary to evidence (and inciting panic), the Institute for Science and International Security put out a report in the midst of the talks with Iran saying that Iran has enough enriched uranium to build five bombs![19]

During the talks, Iranian officials meticulously crafted their argument on the Non-Proliferation Treaty, a treaty that has been acknowledged by all Western powers.[20] The Treaty acknowledges “the inalienable right of all the Parties to the Treaty to develop research, production and use of nuclear energy for peaceful purposes without discrimination.”[21]

Iran also made it clear that its nuclear program will not exceed the 20 percent benchmark,[22] which is right in line with the Treaty itself. Yet the Zionist regime both in Israel and America continued to claim that Iran was being unreasonable.[23]

This is no surprise at all, for Iran has tried this in 2004 and in 2005, demonstrating that it was ready to compromise its nuclear program and even convert all its nuclear energy to fuel rods if the U.S. would support it. Under such a program, the IAEA would be free to check any undeclared facilities.

Some officials in England were even willing to admit that Iran was reaching out to the West. Peter Jenkins, British representative to the IAEA and member of the British delegation to Paris, declared, “All of us were impressed by the proposal.”

But the U.S., under Bush, dismissed the offer and wanted Iran to shut down all its nuclear programs. England followed suit. “The British objective was to eliminate entirely Iran’s enrichment capability,” Jenkins continued.

“I remember we couldn’t even allow Iran to have 20 centrifuges for R&D (research and development) purposes, because we ourselves had mastered the technology with even fewer than that.”[24]

After months of propaganda by the Zionist machine, Western powers denied Iran the right to even keep its 20 percent uranium for medical and power plant purposes.[25] Iranian officials then refused to give up that 20 percent, with good reason, saying, “We have no reason to cede on 20 percent, because we produce only as much of the 20 percent fuel as we need. No more, no less.”[26]

Right after the second-round talks with Iran, one unidentified U.S. official declared, “Obviously that was not something we were prepared to do.”[27] That “something” was giving Iran the right to continue to have uranium up to 20 percent, even though this is not against the Non-Proliferation Treaty.

In order to maintain their total shutdown position, the IAEA had to propagate the idea that Iran is building hundreds of enrichment machines to increase their uranium capabilities,[28] finally concluding that Iran was the one being unreasonable.[29] Some Western officials see the illogical leap of this but they remain silent. The only country that has been vocal in their stand against going to war against a sovereign country such as Iran is Russia.[30]

Moreover, it has been reported that 20 percent “highly enriched uranium,” which is what Iran has, is not enough to build nuclear weapons. 90 percent or more is needed,[31] and there is no evidence suggesting that Iran could reach that number anytime soon. Some scientists, like Clinton Bastin, argue that Iran cannot reach that number at all.

Bastin, the head of the U.S. Atomic Energy Commission, is a nuclear scientist who also served as a Marine in World War II. Bastin declared that Iran wanted to use its uranium to build nuclear power plants, and even negotiated with the United States in the 1970s to buy five plants. Though the United States promised to sell them the plants, it later denied doing so.

As a result, Iran cancelled its deal and looked elsewhere, particularly to Russia, which was more than ready to help. Now Iran is committed to building its own nuclear power plant, but the Zionist regime in Israel has tried to persuade the entire Western world that Iran is building nuclear weapons,[32] despite the fact that U.S. intelligence officials and even some Israeli officials and intelligence agencies, including the Mossad, have repeatedly declared that Iran is not researching nuclear weapons.[33]

Bastin also declared that many of the inspectors at the IAEA are not scientists and are not familiar with nuclear chemicals, and thus are more likely to be driven by ideology or external misinformation.[34]

It must be made clear that the 20 percent uranium threshold is legitimate and legal under the Non-Proliferation Treaty, which Iran has signed and Israel has not.[35] Catherine Ashton, foreign minister for the European Union, made it clear that Iran has the right “to the peaceful use of nuclear power.”[36]

Here is the interesting fact: in the 1960s the United States sold Iran a research reactor and enough weapons-grade uranium to set up nuclear fuel along with atomic power plants in Iran. The same reactor “still operates, supplying isotopes used in the medical treatment of 800,000” Iranians every year.[37]

Since the reactor is dependent on other fuel reactors, which the United States can provide, Iran asked them to help in 2010. Bad move. Instead, the United States asked for more sanctions on Iran, even though Iran’s goal was to protect Iranian citizens with respect to medical research.[38]

As already suggested, Israel does not even allow inspection of its nuclear facilities, as one of the laws articulated by the Non-Proliferation Acts. Israel has been pushing the West, most particularly the United States, to sanction Iran because they perceive that Iran is trying to build nuclear weapons. Yet the issue that Israel does not want to be transparent about its nuclear weapons program created a firestorm of discussion.[39]

In the midst of all that, Israel claimed that perhaps one day they will change their nuclear weapons policy on their own terms and not on anyone else’s.[40] Based on that faulty logic, who then should be considered the real threat? This is why decent CIA officials are now denouncing Israel as dangerous. As former CIA official Philip Giraldi has recently showed, this wicked entity has cost America dearly.[41]