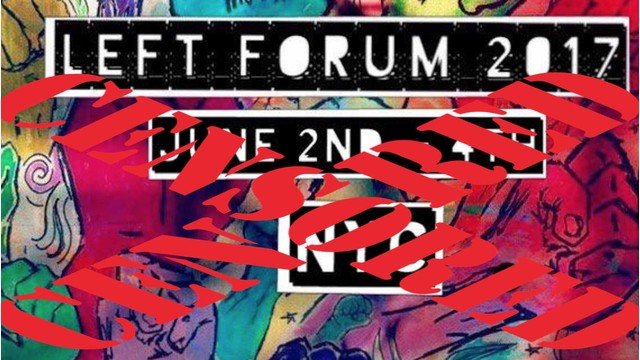 Watch us break down Manchester on False Flag Weekly News above – click HERE for story links. Hope to see you in NYC next Sunday, June 4!

Professor Anthony Hall and I, co-hosts of False Flag Weekly News, will be taking our show on the road next week – to New York City for the Left Forum.

Our NYC visit signals a defiant challenge to “self-hating Zionist” Spencer Sunshine, who led an apparent one-man-effort to censor our panels on 9/11 truth, false flags, and fake terrorism.

Though the Left Forum capitulated to Sunshine, we have found a nearby alternate venue. As the press release below states:

Due to a recognized pattern of harassment by apparent Zionists elements, the location of the banned panels will not be announced until Friday, June 2 via the following website: http://noliesradio.org/archives/130703.

The Left Forum – America’s biggest Left event – attracts many thousands of people and showcases a wide variety of topics and viewpoints. It seems odd that leftists, who are theoretically champions of peace and free speech, would crush discussion of the deceptions that lead the world into war.

Below is the press release from the Left Forum’s Deep State track organizers.

PS If you can’t make it to New York, you can still watch the panels live on NoLiesRadio.org. 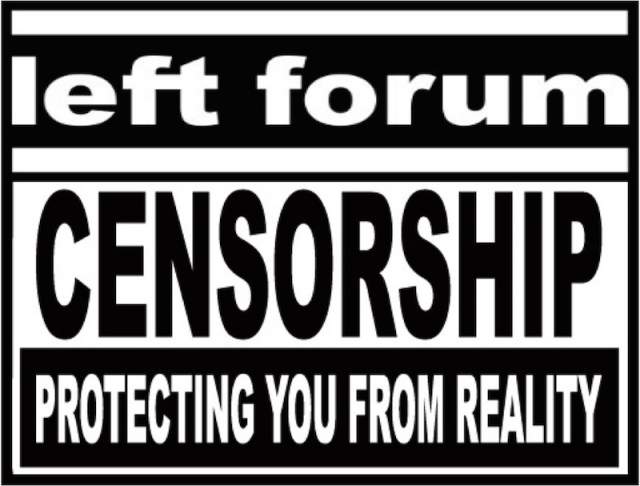 SP​EAKERS REFUSE TO BE SILENCED

COME TO THE “LEFT OUT FORUM”!

​​​The Left Forum, the country’s largest leftist conference, has banned three panels on the Deep State from this year’s line-up without any explanation, apparently due to baseless charges of “antisemitism” by two individuals.

Please publicize this pernicious threat to free speech​ and support the “Left Out Forum.”
​​

The Left Forum will be held June 2-4, 2017, at John Jay Criminal College in New York City. Approximately 3,000 people attend the annual conference to hear up to 250 panels, plenaries, and keynote speeches.

The three banned panels are:

It seems it was several speakers—not content—that were deemed objectionable. The Left Forum had received two letters with contorted, out-of-context allegations claiming some of the panelists were antisemitic and should not be allowed to speak. The Board subsequently rejected three of the five panels submitted by grassroots activists less than a month before the conference start.

The Left Forum shared both letters with the panel organizers, whose only recourse was to email a vigorous response rebutting the false and libelous accusations. Panel speakers and many supporters wrote letters of protest as well, all of which went unanswered. The Board refused to reverse their decision to allow the three panels. The entire process had the hallmarks of a secretive grand jury.

The Left Forum’s capitulation to shadowy pressure must be contextualized as part of a brazen repression of academics and activists whose alternative perspectives run counter to official versions of controversial events. Many academics—including several Deep State panel speakers—have been fired or suspended, almost all without reprieve. Much, but not all, of this thought policing derives from an organized meta strategy to oppose any criticism of Israel.

The following are just a few examples of silencing dissent by labeling it “antisemitic” based on an extreme, warped interpretation of hate speech.

​​Given the conference theme is “Resistance,” it is ironic that the Left Forum Board is using neo-McCarthyist tactics to thwart resistance by grassroots activists of debatable official narratives.
Recommended reading: We Will Not Be Silenced: The Academic Repression of Israel’s Critics, edited by William I. Robinson and Maryam S. Griffin

The Deep State panel line-up on Sunday, June 4 will be:

12:00-1:50 – Co-Opting the Left: Infiltration by the Corporate State to Neutralize Resistance

See attached for a full description of the five Deep State panels and panelist bios.

An important sister panel—Deep State 2.0: Against Anti-Semitism, But Critical of Zionism—features Alison Weir and will be presented on Saturday, 10:00 a.m., Room 1.93, John JayCriminal College.  Weir has authored a landmark report that documents an international Zionist campaign to criminalize criticism of Israel as antisemitic.

The panels will be live video streamed on the Internet courtesy of No Lies Radio. More information available at:  http://noliesradio.org/leftforum