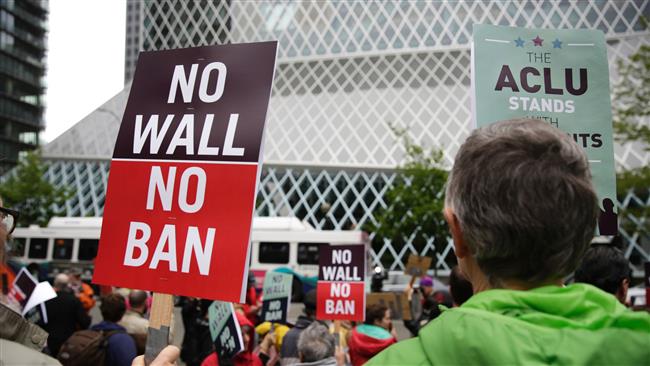 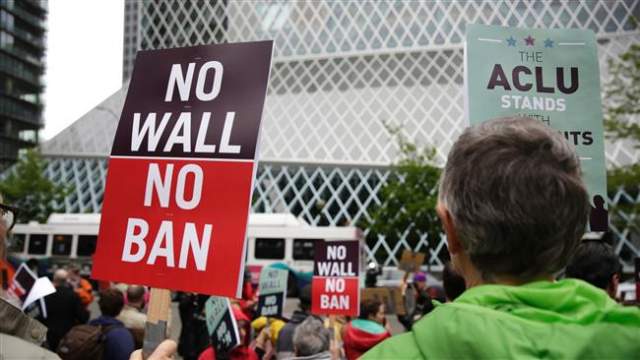 “The judge said the order “speaks with vague words of national security, but in context drips with religious intolerance, animus, and discrimination.”

[ Editor’s Note: This story got lost in all the Syrian war news and Trump’s foreign tour, where he has tried to take the news focus off his domestic debacle, and with some success. Former Republican Speaker of the House Boehner confirmed this in plain English,“Everything else he’s done (in office) has been a complete disaster,” the Ohio Republican said, according to the Associated Press.

This 10-3 Appeals Court ruling with very strong language has carved in stone that, despite the Rudy Giuliani legal crew’s best efforts to put lipstick on a pig, the court ruled that Trump’s hyped terror threat ploy in no way justified his “Muslim ban”.

In effect, the court was confirming the Jim Dean position that Trump would get caught in his reality tv show style of thinking that he can just script any damn reason he wants to justify something because he is the President.

It is also showing that, rather then having good advisers that talk him out of squandering his presidential credibility, he surrounded himself with panderers and ass-kissers that just stoke the fires for his mistakes.

Trump now has on his record the cheap, disparaging remarks he made about the “liberal judges”, and the damage that has done in all of this future relations with the federal judiciary, in that he was besmirching them all with those comments. Again, better advisers would have told him that his cheap ploy to instantly elevate himself to the “defender of Americans against terrorism” would not work with a hyped threat, and he would end up with a hostile judiciary despite the appointments he has pending.

The risk he took here was totally unnecessary, as the uncontrolled Hispanic immigration problem, especially the gangs, has always been the real terror slaughter going on in America. But because the victims were primarily in that community, it did not rise to a level of national political concern.

As more senior political commentators are beginning to agree, big mistakes like this are due to not only an inexperienced president, but his having surrounded himself with inexperienced people in the White House. Experienced campaign “hustlers” are not a good pool of talent to build a staff out of to run the government.

Because Trump is a hustler himself, he felt he had a mandate to bring more “street smart” hustlers in to drain the swam, but what we are seeing is that they are the swamp. I have to give Trump credit, it was a good hustle. Now we will see if the public punishes him for it, or if they lap it up… Jim W. Dean ]

A US federal appeals court has refused to reinstate Donald Trump’s controversial travel ban, dealing a fresh blow to the American president’s bid to ban Muslims from several countries.

The Fourth Circuit Court of Appeals in Richmond, Virginia, said in the 10-3 ruling on Thursday  it “remained unconvinced” that the part of the travel ban naming the six Islamic countries had “more to do with national security than it does with effectuating the president’s promised Muslim ban.”

The court said Trump’s revised travel ban on citizens of Iran, Syria, Libya, Yemen, Somalia and Sudan discriminated on the basis of religion. Religious discrimination is forbidden by the US Constitution.

It was another setback for President Trump, who saw his previous attempts halted by the federal courts before. The latest decision means the case is likely to end up in the Supreme Court.

Trump signed the executive order in late January, originally placing a 90-day travel ban on people from Iran, Libya, Syria, Somalia, Sudan, Iraq, and Yemen and a 120-day ban on any refugees.

“Congress granted the president broad power to deny entry to aliens, but that power is not absolute,” Chief Judge Roger Gregory said in the ruling. “It cannot go unchecked when, as here, the president wields it through an executive edict that stands to cause irreparable harm to individuals across this nation,” he added.

The judge said the order “speaks with vague words of national security, but in context drips with religious intolerance, animus, and discrimination.”

Iraq was removed from the list in a revised version of the ban on March 6, and applied the restriction only to new visa applicants. It also removed an indefinite ban on Syrian refugees.