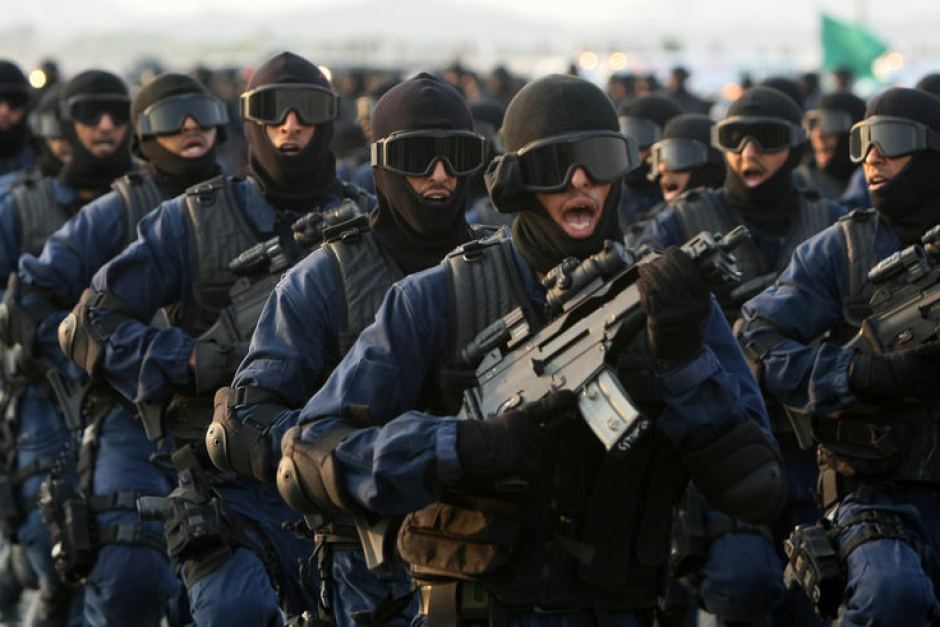 [ Editor’s Note: Peter Ford is out in front once again debunking mass media fake geopolitical news, which the airheads in Saudi Arabia have taken the lead on with their paper Arab NATO. To attempt something like this – after its Arab Yemen coalition was dead on arrival after it was announced – shows they are lost in space.

Because Egypt had the large and professional army, it was slotted to take the lead with the Yemen effort, but Sisi played the Saudi game – he agreed to be involved and then did nothing. He knew that sending his troops to fight the poor Yemeni people would create bad morale inside the army, plus he wanted it focused on fighting the al-Qaeda problem in the Sinai.

But Ford makes a good point, which Western media and governments will not touch, that the Saudi Army, despite the huge funding and professionally trained manpower, is really a fake one, as no one really intends to fight.

When government workers typically would only work an hour a day, relying on the army of contract immigrant slave workers to do 95% of the work, why would they expect the military people to chose to be slaves when they could pretend to be soldiers and collect their paychecks like everyone else?

But the fake Saudis and the fake Trump were a match make in heaven, because as strange as it seems, they are cut from similar cloth. Both have schemed and exploited their way to the top, and are experts at survival, where one of their talents is diverting attention from their sordid pasts onto someone else.

Iran seems to have been agreed upon as the new retread bogeyman when the prior attempts failed, even when totally exposed as a hoax with the P5+1 agreement, and although the Israelis could not produce a shred of proof that Iran had a secret nuke program. This new attempt is so idiotic as to be beyond comprehension, until you look at who is behind it.

While we are seeing a big ramping up of this charge of Iran being the biggest state-sponsor of terrorism in the region, neither the Saudis nor Trump feel it necessary to present us with a white paper on the details, so we can compare it to the white papers we already have on the US’ and Saudi’s long history of using proxy terrorism. You just can’t make this stuff up… Jim W. Dean ]

The Saudis and the Emiratis would never dare put their troops onto a battlefield in Syria or Iraq for fear the troops would mutiny and join ISIS, says Peter Ford, the former UK ambassador to Syria and Bahrain.

US President Donald Trump on Sunday addressed leaders of 55 Muslim-majority countries who gathered for the Arab-Islamic American Summit in Saudi Arabia’s capital Riyadh.

Washington and Middle East countries signed a new pact that promises to provide extra troops to fight terrorists. The so-called Riyadh declaration says leaders of those Islamic countries are ready to provide a reserve force of 34,000 troops when needed.

RT asked analysts where this “reserve force” of 34,000 troops will be used? Peter Ford said he thinks “it’s a myth.” In his opinion, the Saudis and Emiratis “cannot count on the loyalty of their own troops.”

“It is a symbolic gesture so Trump can look good in the eyes of the American and the wider Western media. Let’s be realistic here: this whole visit was not about advancing the fight against terrorism, or advancing Middle East peace – it was about Trump trying to recover some prestige after his battering back home in Washington. So these symbolic gestures and these pictures of him doing Saudi dancing in Riyadh,” Ford said.

This entire Saudi trip “was designed to restore Trump’s image,” the former ambassador added. “If he were serious, then in his big speech yesterday we would have heard some acknowledgment of the two countries, which are doing most to resist ISIS. That is the government of Iraq and the government of Syria.

But Trump did not make any acknowledgment whatsoever of these countries, and he also tried to portray Iran, as the biggest threat in terms of terrorism, while this is a blatant distortion that has not been one single instance that Trump could point to of Iranian-inspired terrorism in the West,” he said.

Independent journalists Rania Khalek said it was specifically said this “reserve force” would be used in Iraq and Syria. She says it is interesting because many of the countries at the gathering on Sunday, “especially Saudi Arabia, have been investing a lot of money in extremist groups operating in Iraq and Syria.”

So, she added, “they are actually responsible for the extremism problem that they are now being tasked with combating.”

Khalek also did not rule out a possibility that this force could be the basis for some kind of an action against Iran, which was not only excluded but also repeatedly bashed at this summit.

“This entire summit was based on not just selling weapons, but on also isolating Iran. When you have a summit based on American-Arab-Islamic understanding, and you exclude Iran, which is a state that’s majority Shia. And you have an audience full of the Sunni leaders from Arab countries, it sends a message. So it is about isolating Iran, as well as it has been sending a message to Iran that ‘we’re all against you’,” she told RT.