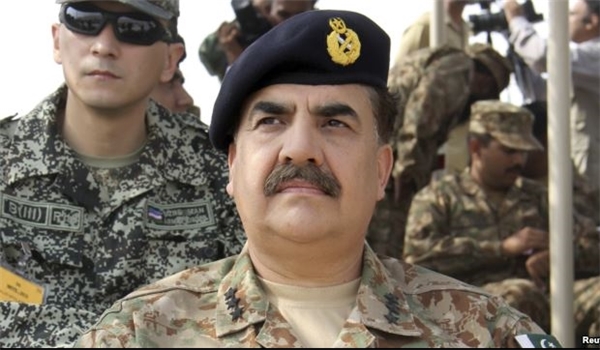 TEHRAN (FNA)- Former Pakistani army chief, Raheel Sharif, who was appointed to head the Saudi-led military coalition against Yemen is attempting to find a way for leaving and returning home.

According to the Pakistani newspaper Daily Osaf, Sharif is dissatisfied with the US strong influence on Saudi Arabia and thinks that the coalition cannot move in the direction he had planned.

According to the report, Riyadh is attempting to limit Sharif’s role and make him obedient, but the Pakistani General cannot accept such a situation and is thinking to tender his resignation.

The appointment of a popular Pakistani general to head the Saudi-led coalition against another Muslim state set off a furor in Pakistan, amid fears that the move could exacerbate sectarian tensions at home.

The Pakistan Tehreek-e-Insaf party, led by Imran Khan, was at the forefront of opposing the decision, saying it could widen the Sunni-Shiite divide in Pakistan and upset Iran, its majority-Shiite neighbor to the West.

“We strongly advocate the policy of impartiality as far as conflicts in the Middle East and Muslim world are concerned,” Khan said. “We under no circumstances should fall into any conflict and hence be watchful of the impacts of every decision or choice we make.”

Saudi Arabia is a major donor to Pakistan and maintains close ties with its civil and military elite. It appealed to Pakistan for military help with its campaign in Yemen.

But Pakistan has so far stayed out of the operation, which is being conducted by Saudi Arabia and a smaller coalition of Arab countries. Egypt, too, has turned down requests for help in Yemen despite receiving considerable financial aid from Saudi Arabia.