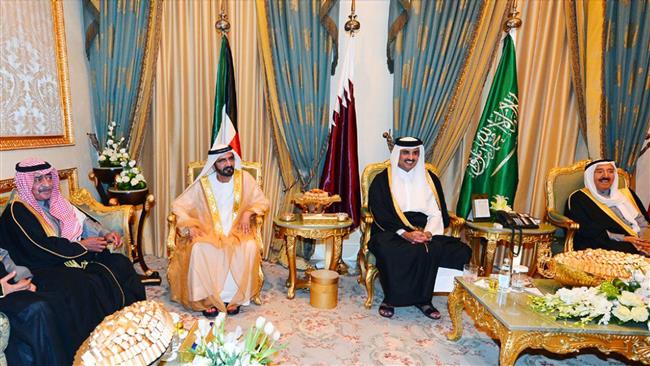 A recent alleged hacking of Qatar’s official state news agency has sparked a row with its Arab neighbors in the Persian Gulf, with analysts predicting that it could even fuel old tensions in the region.

The Qatari emir was quoted as describing Iran as an “Islamic power” and “big power in the stabilization of the region.”

He was also cited as questioning US President Donald Trump’s hostility towards Tehran, speaking of “tensions” between Doha and Washington, praising Hamas resistance movement as “the legitimate representative of the Palestinian people,” and threatening to withdraw ambassadors from a range of Middle Eastern countries.

The Qatari government communications office was quick to claim that hackers had broken into the QNA website and published the fake news.

However, the Qatari state television’s nightly newscast had showed clips of the monarch at an official military ceremony with a scrolling ticker at the bottom of the screen showing the same remarks.

They included reference that Qatar had “strong relations” with Iran. “Iran represents a regional and Islamic power that cannot be ignored and it is unwise to face up against it,” the ticker read at one point. “It is a big power in the stabilization of the region.”

Qatari Foreign Minister Mohammed bin Abdulrahman Al Thani then said his country was being targeted in a “hostile media campaign.”

Analysts said on Saturday that the developments appeared to have once again set Qatar against its rivals in the regions.

Doha has long has faced criticism from its Arab neighbors over its support for Egypt’s Muslim Brotherhood.

Back in 2014, Saudi Arabia, Bahrain and the UAE withdrew their ambassadors from Qatar in protest at what they called Doha’s “interference in their internal affairs.”

Christopher Davidson of Durham University said the recent developments reflected a “serious fracture between the two different camps in the Persian Gulf,” adding, “The divisions remain very deep about the vision for the region.”

Kristian Ulrichsen of Rice University also told AFP that a possible revival of a 2014 rift between Qatar and its neighbors “will depend on whether the issue continues to escalate or is quietly dropped.”

“The apparent blocking of Al Jazeera’s website and Qatar TV in Saudi Arabia and the UAE is an indication that deeper tensions may indeed be at play,” he said.

“It may be the case that the Saudis and Emiratis feel emboldened by the success of their re-set of ties with the [US President Donald] Trump presidency to become more assertive in regional affairs,” he added.