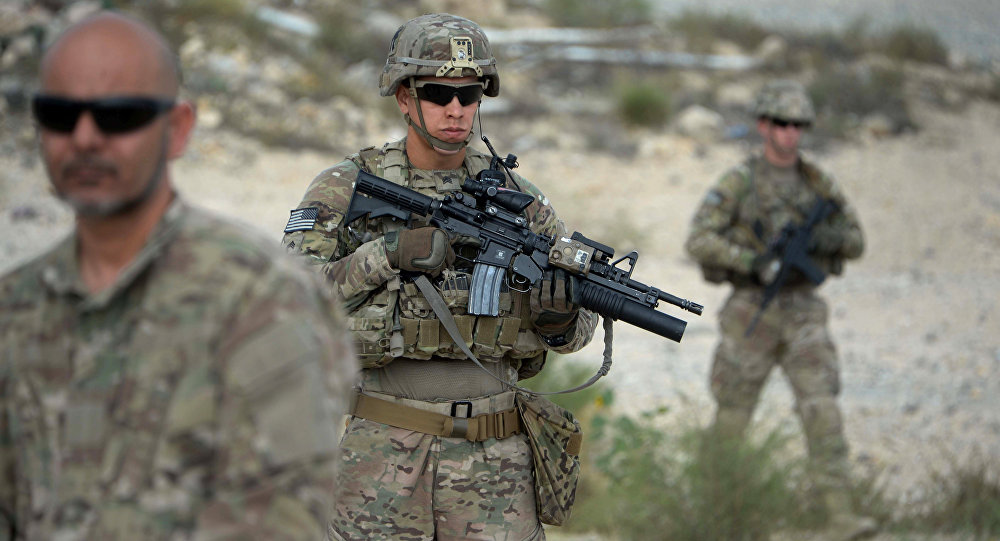 Sputnik/Moscow: It still remains unclear whether it’s the Pentagon’s negligence or a well-calculated scheme that facilitates the “uncontrolled” spread of US weapons across the Middle East, Africa and Central Asia, RIA Novosti contributor Alexander Khrolenko writes.

There is something suspicious about Washington’s inability to control the proliferation of its weapons across the Middle East, Africa and Central Asia, RIA Novosti contributor Alexander Khrolenko noted, commenting on Amnesty International’s recent report regarding US arms transfers.

The government audit conducted in 2016 indicated that the US Army “failed to keep tabs on more than $1 billion worth of arms and other military equipment in Iraq and Kuwait.”

“It makes for especially sobering reading given the long history of leakage of US arms to multiple armed groups committing atrocities in Iraq, including the armed group calling itself the Islamic State,” Patrick Wilcken, Amnesty International’s Arms Control and Human Rights Researcher, pointed out.

However, the Pentagon rushed to refute the accusations.

“We did NOT lose/fail to keep tabs on $1 billion of equipment…nowhere in that report does it say we lost equipment,” Defense Department spokesperson Eric Pahon told Sputnik on Thursday.

While the accuracy of the Amnesty International report raises questions in the eyes of the US Department of Defense, there have been numerous reports in the press ringing alarm bells over the mysterious disappearance of US weapons.

Khrolenko cited the Washington Post’s 2015 report about Pentagon’s losing track of $500 million of weapons and equipment provided to Yemen.

“The Pentagon is unable to account for more than $500 million in US military aid given to Yemen, amid fears that the weaponry, aircraft, and equipment are at risk of being seized by Iranian-backed rebels or al-Qaeda,” the media outlet wrote.

While the Pentagon declined to comment on the issue, a defense official, speaking on the condition of anonymity, told the media outlet that “even in the best-case scenario in an unstable country, we [DoD] never have 100 percent accountability.”

Back in October 2014, the newspaper revealed how the Pentagon accidentally delivered weapons intended for Kurdish fighters to Daesh (ISIS/ISIL) near the Syrian border town of Kobane by an airdrop.

“The incident highlights the difficulty in making sure all airdrops are accurate, even with GPS-guided parachutes that the Air Force commonly uses,” the article summarized.

In addition, the US weapons have repeatedly found its way into the hands of Daesh and al-Nusra Front terrorists together with “moderate” Syrian rebels defectors backed by the US.

For instance, as The Telegraph reported in September 2015, the US-trained Division 30 rebels in Syria betrayed Washington and handed their weapons to al-Nusra Front after being granted safe passage.

Khrolenko recalled that in September 2016 German newspaper Kolner Stadt-Anzeiger published an interview with Abu Al Ezz, al-Nusra Front’s (also known as Jabhat Fatah al-Sham) commander who claimed that the US had provided the terrorist group with TOW anti-tank missiles.

Although one might throw Abu Al Ezz’s interview into doubt, facts on the ground indicate that Syrian and Iraqi Islamist groups have somehow obtained US-made TOWs and Stingers.

Likewise, it is still shrouded in secrecy how Daesh fighters managed to seize a variety of US weapons and sensitive radio equipment in Afghanistan in August 2016.

“It is obvious that the flaws in American weapons deliveries, which [the Pentagon] has overlooked for years, have led to the uncontrolled spread of arms in the Middle East and Africa. Shadow shipments through third countries, as well as secrecy and distortion of information, contribute to the ‘disappearance’ of weaponry,” Khrolenko observed.

“Perhaps, this is a system, a business scheme,” he assumed.

According to the journalist, terrorism provides the US omnipotent military-industrial complex with a stable income. “No one will buy lots of weapons if there is lasting peace,” the journalist explained.

“Apparently, the US and NATO are unable to fully control the consequences of their actions in the Middle East, but the predictable profits of the military-industrial complex are still under control. New American president [Donald Trump] will not change this scheme; obviously, he cannot change anything due to objective circumstances,” the journalist wrote, predicting that the Pentagon will continue to “lose” its weapons in conflict zones.