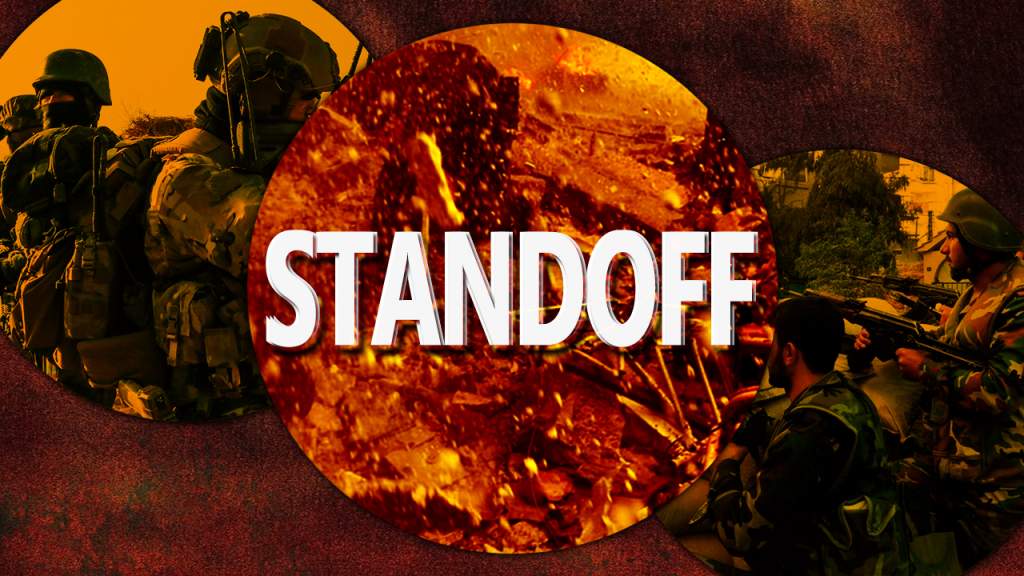 Editor’s note:  Playing in the background here is a very dangerous game.  The US Special Forces, aiding al Qaeda and ISIS groups masquerading as “Free Syrian Army,” a hideous joke no sane person takes seriously, is now going head to head with the Syrian Arab Army, the military force of the legal government of Syria.

Similarly, the version VT has of the deal the US is cutting in Raqqah is slightly different than presented here.  We watched the Turks move into Al Bab and load 900 ISIS fighters into trucks and move them to Raqqah.  We belief the US is planning to move ISIS, along with their Saudi and Israeli command, to Deir Ezzor.  The US plans to move into that region from the South, through Jordan, while US coalition forces, like the hapless Norwegians, are intended to hold off Iraqi Popular forces that are expected to cross into Syria and extend the war from there.

The US is clearly trying to seize up to 40% of Syria and is working hand in hand with ISIS and al Qaeda to do it.  This is the plan, we believe, the Pentagon presented to Trump, who was too stupid to realize that Russia is going to eventually down some American planes and put an end to this petty foolishness.

The Pentagon is trying to build on his history of “big wins.”  We wish those sad-asses good luck with that.g

The US-led coalition is desperately trying to prevent the Syrian government from restoring control over its borders with Syria and Iraq. Since Friday, US-backed militant groups, also known as the Free Syrian Army (FSA), have repeatedly attacked the Syrian Arab Army (SAA) and its allies near the Zaza area, the Zuluf Reserve and the Scientific Research Battalion area. However, government forces repelled attack, killing unknown number of militants and destroying at least 4 vehicles belonged to the US-backed groups.

According to pro-government sources and available photos, the so-called opposition actively uses Switchblade suicide drones against government troops in the area. This means that the US Special Forces are involved in a standoff with the SAA.

Following a failed attempt to drive government forces out from the Damascus-Baghdad highway, US-led coalition aircraft dropped leaflets warning the SAA from moving towards the border town of al-Tanf and arguing that government forces have to withdraw from the Zaza area. Thus, the US-led force deployed in the area once again confirmed that its real goals have little with combating ISIS terrorists.

On Saturday, SAA deployed the 800th Battalion of the Republican Guards in the eastern Zuluf reserve area. The battalion 800 is among the best-equipped units of the SAA. Its deployment in the area shows that the Syrian military is not going to abandon its attempts to restore control over the border area. Meanwhile, government forces also took full control over the village of Alyania and the nearby area.

While the US-led coalition was opposing the Damascus government, the Iraqi Popular Mobilization Units (PMU) liberated the town of Al-Qahtaniya. The goal of the PMU advance is the ISIS stronghold of Al-Ba’aj, 36km from the border with Syria. Some experts believe that the expansion of the PMU influence over the Syrian-Iraqi border will contribute to the Damascus government seeking to drive out US-backed militants from the area.

In the province of Aleppo, the SAA Tiger Forces have liberated Ras al-Ain al-Ahmar, the sugar factory, the train station and other points near the town of Maskana, the last ISIS defense site in the province. Warplanes of the Russian and Syrian air forces targeted ISIS units and their vehicles inside the town of Maskana, and in the villages of Al-Taybeh and Al-Hamidiya. Local sources indicate that ISIS may withdraw from Maskana under a threat of a full encirclement by the SAA. However, if ISIS terrorists decide to defend the town, the SAA may just outflank it and continue advancing towards the province of Raqqah via the N4 highway.

Warplanes of the Russian and Syrian air forces targeted ISIS units and their vehicles inside the town of Maskana, and in the villages of Al-Taybeh and Al-Hamidiya. ISIS destroyed a SAA battle tank with an ATGM.

The SAA has repelled several ISIS attempts to infiltrate in the Tal Brok area and destroyed a vehicle and killed a number of ISIS militants during the clashes in the Al-Makabir area in Deir Ezzor. The situation in the besieged city remains tense. If the US-backed Syrian Democratic Forces (SDF) allow ISIS to freely withdraw from Raqqa, the SAA in Deir Ezzor may face a critical threat to their safety because the ISIS storming group will receive large reinforcements.

Last weekend, reports appeared in the Russian media that the SDF may allow ISIS to withdraw from Raqqah under another deal with the terrorists group. The SDF denied the allegations. However, the group’s deals with ISIS in Manbij and Tabqa don’t allow to believe that the US-backed force is not considering this option.