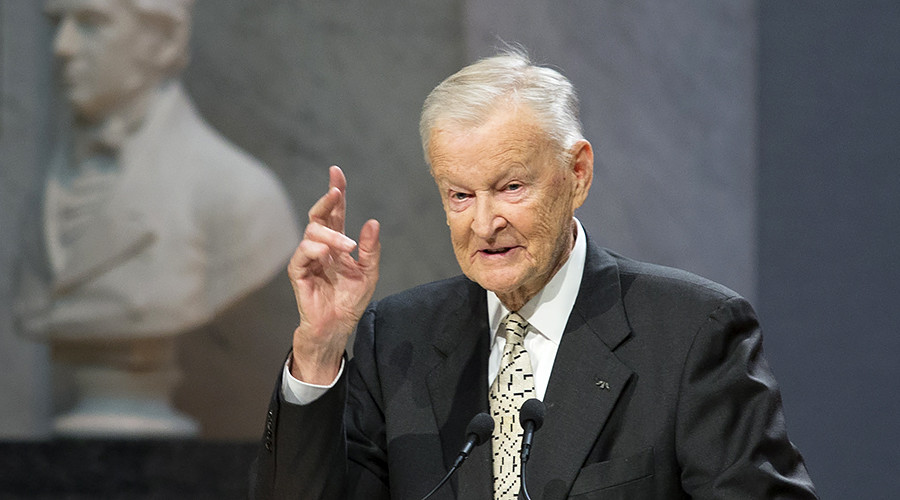 Zbigniew Brzezinski, the hawkish strategic theorist and former US President Jimmy Carter’s national security adviser, has died at the age of 89.

Brzezinski’s death, at a hospital in Northern Virginia, was announced on Friday night by his daughter, Mika, on social media. He was born in Warsaw, Poland, on March 28, 1928.

“He was known to his friends as Zbig, to his grandchildren as Chief and to his wife as the enduring love of her life,” she wrote.

“I just knew him as the most inspiring, loving and devoted father any girl could ever have,” she added.

Brzezinski, like Henry A. Kissinger, was a foreign-born intellectual with extensive influence in global affairs, even long after they left the White House.

The Polish-born academic served as a counselor to former President Lyndon B. Johnson from 1966 to 1968 and was Carter’s national security adviser from 1977 to 1981.

Brzezinski used to claim that he helped topple economic barriers between the Soviet Union, China and the West, and helped Carter establish ties between Egypt and Israel, which led to the Camp David accords between Anwar Sadat and Menachem Begin.

Brzezinski, the author of The Grand Chessboard: American Primacy and Its Geostrategic Imperatives, had once acknowledged that he provoked the Soviet Union to invade Afghanistan so that it could get its “Vietnam”. The US administration trained and sponsored fighters from Afghanistan and militants from several other countries to fight against the Soviet invasion.

‘A legacy of death and destruction’

American scholar Dennis Etler told Press TV that Brzezinski was the architect of neo-liberal imperialism who left “a legacy of death and destruction, blood and tears.”

“He was the godfather of the Taliban, al-Qaeda and Daesh. His influence can be seen behind all the tragedies in today’s headlines, from terrorist bombings, to the refugee crisis and proxy wars raging throughout North Africa, the Middle East and South Asia,” he stated.

“His passing is a time to reflect on the millions who have perished due to his policies,” said Dennis, an academic who has a decades-long interest in international affairs.

He further said that Brzezinski was “a Zionist Polish Catholic, not Jewish as some seem to assert.”

‘Beginning of the end of the Neocons’

Rodney Martin, a former congressional staffer, argued that “Brzezinski’s death marks the beginning of the end of the Neocons.”

“He, like his fellow war criminal Henry Kissinger ushered in the Neocons’ New World Era which resulted in Neocons controlling both Democrat and Republican foreign policy and nearly 40 years of American War, war crimes and outright banditry around the globe,” he told Press TV.

“His end is not sad, his life work brought sadness and despair around the globe,” he observed.